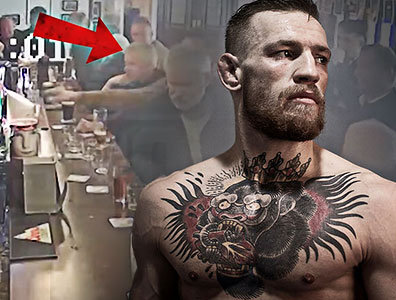 In an exclusive interview with Ariel Helwani, who covers primarily MMA and UFC for the ESPN network, Conor McGregor expresses his regret and remorse for punching an older man at a pub in Dublin, Ireland. This incident took place in April of 2019, and it was quite despicable behavior especially coming from a highly trained and skilled mixed martial artist as well as former 2 division UFC champion.

The Marble Arch Bar in Dublin, Ireland was the location, April 6, 2019 was the date, Conor McGregor clearly and unmistakably struck the elder gentleman in the face. I am not sure what words were exchanged as audio was not available on the video clip I watched, but it looked highly unnecessary on McGregor’s behalf.

Check out the video of the incident:

Apparently, Conor got into another issue just about a month earlier when he smashed a bystander’s cellular device outside a club in Miami, Florida. There is a long list of his misconduct, some of which is to get himself the desired attention he craves, other times it’s his temper that ends up getting him in trouble.

Either way, he is the type of athlete that has to be under the bright lights of fame and fortune. I believe he is looking to come out of retirement. In the interview with ESPN, he sounded eager to fight in the octagon again sometime soon. Currently McGregor is recovering from a light surgery on his left hand that he suffered last May. The plan is for him to get back in the ring in July but his hand was still too weak for him to battle against Justin Gaethje at Madison Square Garden (fight in New York City), but for now he has his sights on fighting again before 2020.

"I was in the wrong," McGregor explained. "That man deserved to enjoy his time in the pub without having it end the way it did. ... I tried to make amends and I made amends back then. But it doesn't matter. I was in the wrong. I must come here before you and take accountability and take responsibility. I owe it to the people that have been supporting me. I owe it to my mother, my father, my family. I owe it to the people who trained me in martial arts. That's not who I am. That's not the reason why I got into martial arts or studying combat sports. The reason I got into it was to defend against that type of scenario."

"I need to just stop reacting to the bait," McGregor continued. "People are trying to bait me into things. Am I the fish or am I the whale? I must be calm, I must be zen. I must lead by example. There's so many people looking up to me. How can I react in this way? I need to get ahold of this and, like I said, I'm working very hard to do this."

"So, if I have this opportunity before me, if I don't execute this and get this right, make this happen for the children of my children's children, all of my successes, all of everything I've achieved will be void, will be meaningless to me," he explained. "I must get this right and I must not go down that path, the written path, the cliché of the fighter that has it all and ruins [it]. I need to be aware of my past, of the past of other individuals, and learn from it and grow and that's what I'm doing."

"Mine is gonna be the greatest one of all."

"I must get my head screwed on and just get back in the game and fight for redemption, retribution, respect -- the things that made me the man I am… And that's what I will do," he concluded.