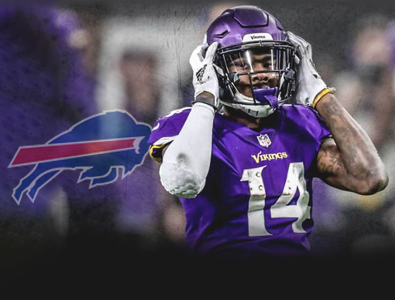 During the first week of the official new year of the National Football League the Minnesota Vikings traded superstar veteran wide receiver, Stefon Diggs, to the Buffalo Bills for four future draft picks. This news came as a surprise to many after the general manager of the Minnesota Vikings told the media that their number one wide receiver wasn’t going anywhere leading everyone to believe that they were going to retain Diggs for at least the upcoming 2020 – 2021 NFL season.

In exchange for Diggs, the Buffalo Bills are sending the Minnesota Vikings multiple draft selections over the next couple years. The Vikings will get the Bills first round, fifth round, and sixth round draft picks in the quickly approaching 2020 NFL draft at the end of this April. They will also receive the Bills fourth round pick in the 2021 NFL draft next year.

The Minnesota Vikings are sending the Bills their seventh round pick in the 2020 NFL draft along with their best receiver. The Buffalo Bills pick up the 26 year old Diggs’ who is currently in the second year of his 5 year $72 million contract. His current contract includes over $40 million in total guaranteed money. The star wide out is scheduled to earn $14,400,000.00 annually until he becomes an unrestricted free agent in 2024.

Why would the Minne 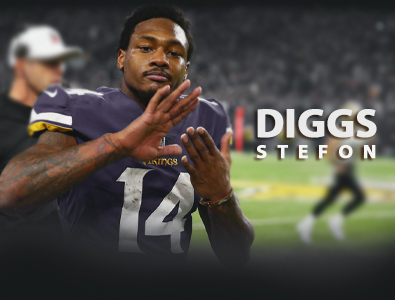 This move involving the Vikings trading away their best wide receiver if not their best overall offensive threat has to be financially motivated. The Vikings did just resign their starting quarterback, Kirk Cousins, to a two year $66 million contract all of which is total guaranteed money going to Cousins over the course of the next two seasons.

I believe that the Vikings are gambling on the fact that they can land another solid wide receiver through the NFL draft in either 2020 or 2021 to fill the shoes of their former speedy deep threat in Diggs. The only problem with that theory is that the Minnesota Vikings organization is built to win now especially because the window to contend for a Super Bowl in the National Football League is not open for too long until a franchise is forced to rebuild the team’s roster in order to realistically compete on the football field. Replacing Stefon through the draft is risky as many wide receivers take time to develop into solid NFL play makers and some draft picks do not live up to their potential.

The quick footed wide receiver was born and raising in Maryland, and he played his collegiate ball at the University of Maryland as well. Diggs was selected in the fifth round of the 2015 NFL draft with the 146th overall pick by the Minnesota Vikings. Throughout his 5 year NFL career all of which was played for the Vikings in the twin cities he has been an outstanding player both on and off the field for Minnesota.

He consistently gains close to 1,000 receiving yards a season with 60 to 100 receptions per year. The last two seasons were arguably his best performances so far in his young career. In 2018 he caught 102 passes for 1021 yards and 9 touchdowns, and in 2019 he gained 1130 yards through the air and scored 6 touchdowns. Diggs should have an outstanding next several years as he is just entering his prime now. The Buffalo Bills got themselves a premier offensive threat by trading for Stefon Diggs as they build to finally contend in the AFC East now that Tom Brady has finally left the New England Patriots.

"He's not only a major part of our offense and a major part of our organization winning games, but he also does a lot of things for this organization off the field," the Minnesota Vikings general manager Rick Spielman stated. "There's no reason -- the rumors or whatever you're talking about -- to anticipate that Stefon Diggs is not going to be a Minnesota Viking. When you have some of the offensive talent that we have, with him and [Adam Thielen] together, with [tight ends Kyle Rudolph and Irv Smith Jr.], with [running backs Dalvin Cook and Alexander Mattison], we have a pretty good support cast around our quarterback." 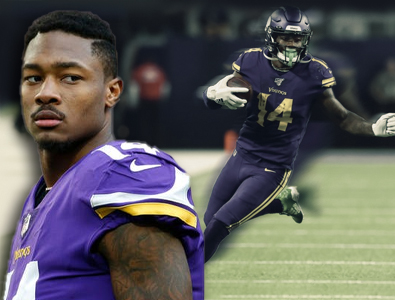 "But that's definitely a position that we're gonna look to see if we can find more talent."

"There's no reason -- the rumors or whatever you're talking about -- to anticipate that Stefon Diggs is not going to be a Minnesota Viking. When you have some of the offensive talent that we have, with him and [Adam] Thielen together, with Rudy [Kyle Rudolph] and Irv Smith, with Dalvin Cook and [Alexander] Mattison, we have a pretty good support cast around our quarterback."

"I know how strongly our coaching staff feels about him, and when you have the ability to pair him and Thielen together on the field, and the tight ends that we have right now on the field, and you have the running back committee that we have on the field, we have some pretty good supporting cast around [Kirk] Cousins," Spielman expressed. "Coming back, running the same system for the second year in a row, we don't want to take a step back, and where we're at with these guys, we want to keep all these guys and move forward. You want these guys on your roster."