What Injury Means to Zion Williamson and Duke 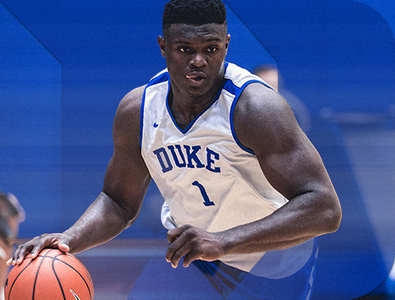 On February 20, 2019, Duke and the University of North Carolina faced off at Cameron Indoor Stadium in Durham, NC. This in-state rivalry runs deep, and many consider it to be the biggest rivalry in all of sports as it is one of them for sure. Prior to the game, there was a whole lot of buzz, even more so than usual.

Tickets to this game were going for Super Bowl like prices. In fact, the least expensive seats in the arena were said to be selling for over $2500. There were major celebrities attending this match up like former President Barack Obama, Spike Lee, Ken Griffey Jr., Todd Gurley, Devin Funchess, and Greg Olsen just to name a few of them. All this hype was mainly generated to see college basketball’s best player, Duke’s freshman Zion Williamson.

For those that do not know who Zion Williamson he is a freshman power forward for Duke University. He is 6’7” and 285 lbs. Along with his incredible size and power he also has a tremendous jumping ability. Williamson broke Duke’s record with a vertical leap of 40 inches. He is fast, strong, and can jump out of the building.

People around basketball are calling him a freak of nature, a once in a generation type player, and a man amongst boys. He is going to be the number one overall pick in the upcoming NBA draft unless something extremely crazy happens. A kid with his size and talent only comes around every so often. He can be compared to players like LeBron James and Shaquille O’Neal.

Within the first minute of the game on Wednesday night Zion Williamson planted his left foot hard causing his shoe to blowout. The shoe literally split in half causing him to go down awkwardly. He was seen on the floor holding the back of his right knee, and Zion left the game never to return to action. He was diagnosed the next day with a Grade 1 right knee sprain. His playing status is day to day.

Williamson was wearing the Nike PG 2.5 shoes. These are Paul George’s signature shoes. He has worn a variety of different Nike’s throughout the season so far. This was not the first time he wore the PG 2.5’s. Nike’s stock went down over 1% the day after the incident occurred most likely due the shoe exploding.

UNC ended up beating Duke badly with the final score of 88-72. Once Zion Williamson went out due to injury 36 seconds into the game everything changed. The Tar Heels took full advantage of injury and pounding the paint. UNC’s big man, Luke Maye, put up 30 points while pulling in 15 rebounds. Duke was getting outrebounded, and they could not keep up with scoring efforts from North Carolina. Without Duke’s best player and no alternate game plan they really didn’t stand a chance. 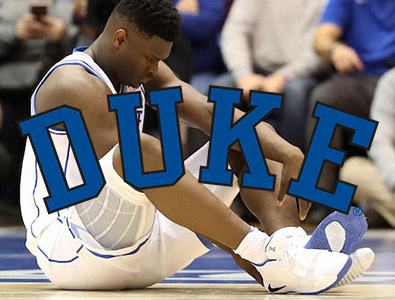 It is hard to say what the future holds for Duke and Zion Williamson. For the time being the Blue Devils will have to find a way to slow down the competition’s interior game. They will have to get better at crashing the glass and rebounding without Zion down low.

Williamson will need to decide whether he comes back to play college basketball again once healthy. Knowing he will be leaving for the NBA next year he may not want to risk anything else happening that could jeopardize his draft stock. Being his one and only year playing NCAA ball he may want to come back and help his team try and win a National Championship.

I have a feeling he will come back and play once he fully recovers from this minor injury. This was a freak occurrence, and he should be back to 100% relatively soon. Basketball players want to do what they do, play and compete as well as start what they finish. Look for Zion to miss a few games, and then return to his team as we are getting close to March Madness.

Duke still is the favorite to win the NCAA tournament.