UPDATE: The company has closed sometime before 2019

Soft Magic Dice is an online gambling software developer that was founded in 2012 and develops both casino games as well as a complete backend system for operators as a way to manage the casinos themselves. Among the games that Soft Magic Dice develops are table games, video slots, video poker, bingo, and keno titles, with many variations of these games available to beef up the library.

We got off to a bad start with Soft Magic Dice as I found bugs in some of their games. However, after many Emails back and forth they fixed them and refunded affected players. As far as I know, all their games are now safe to play.

There are no fewer than five baccarat games to choose from. The only differences among them are the table limits and what the tie bet pays. The limits are as follows, as taken from the Mission 2 Game casino:

The number of decks is not stated in the help files but eight decks are traditionally used in land casinos.

Soft Magic Dice has five skins of the same bingo game. In all of them the player may choose up to 10 cards and whether the game will draw 25, 30, or 35 balls. Naturally, the wins are larger the fewer the balls drawn.

The rules don't say what Soft Magic Dice does. There was one situation where I had a straight line bingo and a diagonal bingo, but was paid for only one, despite the two wins being listed separately in the pay table, although paying the same.

Another annoyance is that the win for a "double bingo" evidently pays if the two lines are the bottom row and right column only.

Bingo math is rather complicated if the rule is (2) or (3) above, so I'll take the lazy way out and assume that all covered patterns pay. Under this assumption, the returns are:

If the game follows rule (2) or (3) above then the return would be marginally less than the figures above. Regardless of the rule on multiple wins on the same card, the returns are quite low, so I would suggest playing something else.

There are three blackjack games to choose from. The following rules are common to all three:

The Royal and Blackjack Pro add a seven-card Charlie rule, which means if the player gets to seven cards without busting then it is an automatic winner.

The table limits are:

Using my blackjack house edge calculator, the house edge is 0.26% with total-dependent basic strategy, before considering the seven-card Charlie rule. That is worth 0.01%, so mark the house edge at 0.25% for the Royal and Blackjack Pro games.

Following is the basic strategy for all three games. 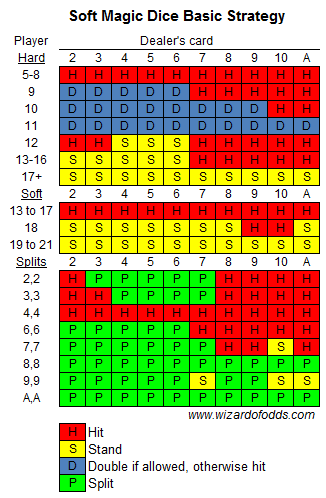 As mentioned above, these house edge figures are based on total-dependent basic strategy. The advantage can be increased by 0.04% by following composition-dependent strategy for single-deck rules where the dealer stands on soft 17. The four most frequent basic strategy exceptions are the following initial hands:

What do you do when you want to add a new game to your casino but don't want to bother to create a new one or steal somebody else's game? Just re-skin an old game. Such is the case with Soft Magic Dice. They have five keno games and they all follow the same standard 80-20 rules and all have the same pay table. The games are:

The all have the following pay table:

The following table shows the return according to the number of picks:

I think I say this in every software review, but I don't see why an Internet casino needs so many different roulette games. In the case of Soft Magic Dice there are five, as follows:

In none of these games does the player lose only half on an even money bet if the ball lands in zero, what I call "French roulette."

These games feature a field of nine areas to scratch. If at least three are the same symbol, then the player wins that amount. The help screen mentioned the possible wins are 2x, 3x, 4x, and 6x the amount bet. Knowing Soft Magic Dice, all of them are likely skins of the same game. No information is provided about the odds, so you're on your own with these.

Then there are the so-called "Dingo" games, as follows:

The way these games work is there are nine areas on the card you can scratch. What you see is what you win. The player can scratch anywhere from 1 to 9, but must pay for each one he scratches. I played Ancient Man Luck at $1 a bet for a little while. These were my resutls:

The "wild man" had an appearance of being a game of skill, where various prize amounts flashed in front of the player. The object was to click "stop" when a high prize was shown. However, the prizes flipped by so fast that I tend to this it was just a show and the prize amount predetermined. The prize I got was 1.0.

The return on my play was 60.7%. I played only 73 times, so please don't put a lot of stock in that figure. The game didn't give much information about the odds. It did list the largest possible win and by clicking the percent symbol the player could see his largest three wins in his last play session.

Since these behave so much like scratch card games, that is how I am categorizing them for purposes of this review.

By my count, Soft Magic Dice has 45 slot machines. They all seem to be the standard 3-reel and 5-reel types. The artwork and sound are rather fun but the designs are rather dated. What you might see in a land casino around 2002. No information is given on the returns so you're on your own.

Soft Magic Dice has seven video poker games and they are all 9-6 Jacks or Better! In other words, they are all skins of the same game. All due credit for offering 9-6 Jacks, which has among the best odds in video poker (99.54% return), but I have to give them an F for variety.

My main complaints about Soft Magic Dice are the software seems rather low budget and the game variety is pretty poor. However, their video poker and blackjack rules are pretty liberal. The only casino using this software, Mission2Game always has lots of bonuses so it is a good place to play if you want you money to last a long time.