One of my interests besides gambling is game shows. I love watching them and analyzing them. The flip side of that coin is I can be heard screaming at my television as math-challenged players make awful decisions. A case and point is when they played through the Monty Hall problem on the last season of Survivor, but let’s not get into that. I still haven’t recovered.

One game I find especially interesting, as a mathematician, is The Price is Right (TPIR). I wrote about the strategy of the Then and Now game in the June 25, 2020 newsletter. This time, I will write about something I analyzed a long time ago, the spin-off. This is a game played twice every one-hour show. 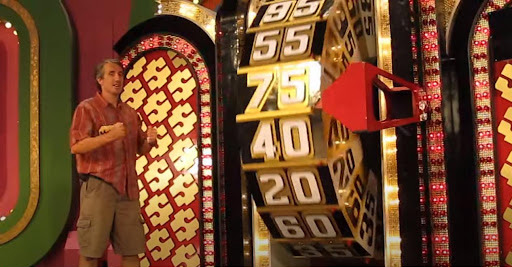 Here I am spinning the spinoff wheel at the old Price is Right show in Las Vegas. This was not for real prizes, but was the actual wheel that was used on the show at one time. You can watch the full video on YouTube.

Here are the rules to win:

“What is the optimal strategy?” you may ask.

Spin again if the first spin is 65 cents or less. Stand with 70 cents or more.

The second player should spin again if any of the following conditions are true, otherwise stand.

If there is NOT a tie between the first and second players, then the player should spin again if either:

If the third player gets 50 cents on the first spin, which ties the winner of the first two players, then he should be indifferent to spinning again and standing.

If there IS a tie between the first and second players, then the player should spin again if either:

There is obviously a positional advantage to going last in this game. Assuming all three players follow optimal strategy, here is the probability of each player winning:

I hope you enjoyed this analysis of the spin-off game. Until next week, may the odds be ever in your favor.