In this week’s newsletter, we continue my journey on the High Sierra Trail. As a reminder, this was a 72-mile journey over six days. Last week we covered day one. This week, we’ll look at day number two, from the Bearpaw campground to the Arroyo Junction.

The day started leaving Bearpaw Campground at an altitude of about 7,650. The first part of the day was spent on comparatively level terrain, traversing the side of a mountain. In the picture below is a rare bridge crossing. It was a long way down from this bridge, so there was no other realistic option other than to build a bridge. Usually, the High Sierra trail requires crossing such creeks and rivers by either walking across rocks, trees, or getting your feet and legs wet. 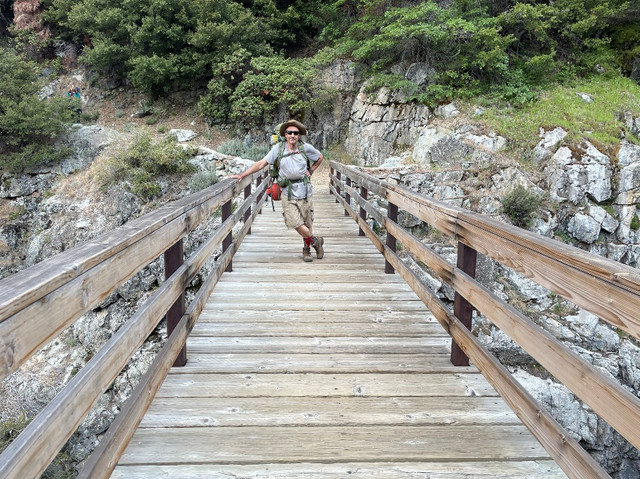 I mentioned last week about the smokey air, due to a controlled burn. Midway through day two we started to escape the smoke. In the picture below you can see the trail looking back and the smokey air we hiked through the previous day and a half. 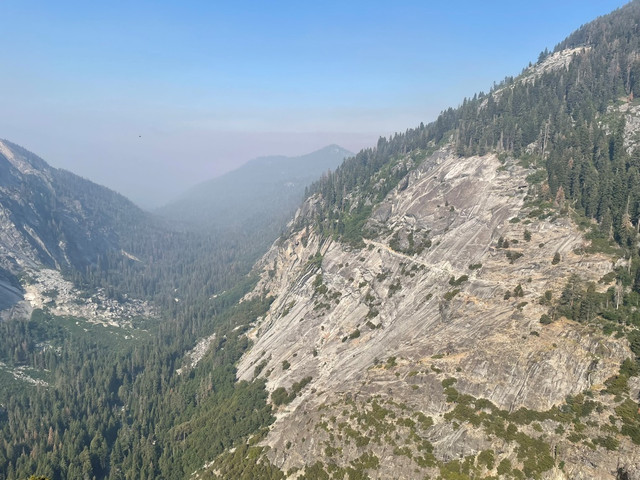 The section of the High Sierra Trail we did on day two must have been the most difficult to construct. For example, in this section we traveled through a short tunnel. You can also see on the right side the rock wall used to form a segment of the trail against a sheer cliff. 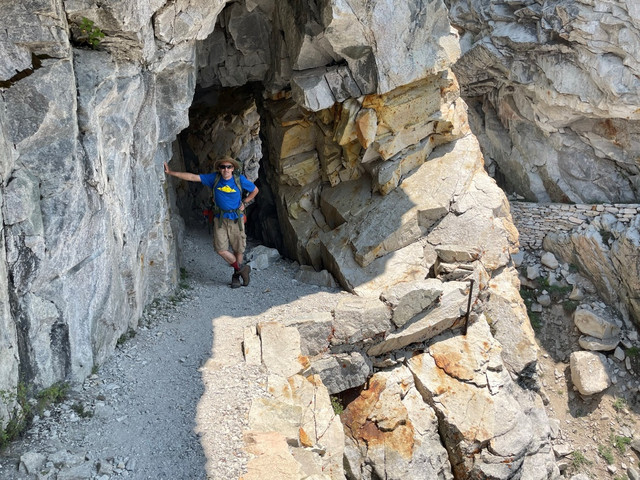 After relatively level ground the first part of the day, the trail suddenly made a sharp incline, as it made its way up to the Kaweah Gap. In the picture below you see the upper Hamilton Lake and trail on the right side of the picture. Hamilton was a gorgeous lake where we enjoyed a nice lunch break and gave me a chance to clean up. The water was very nice and not too cold. 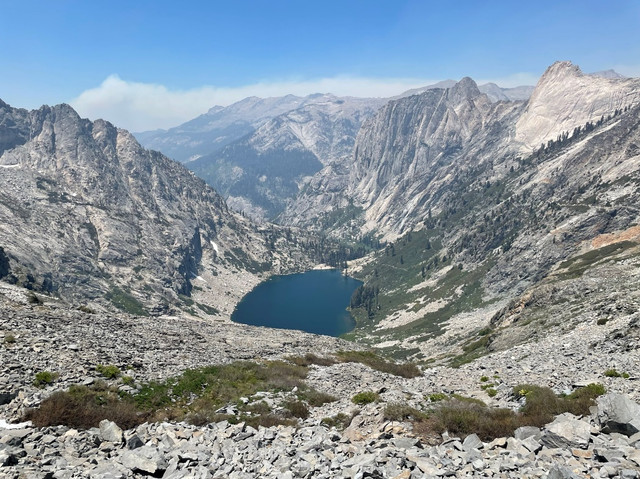 The trail continued to rise to an altitude of 10,700 feet at the Kaweah Gap. Snow started to cover parts of the trail. Sometimes it took some trial and error to find where the trail left such snow patches. Fortunately, we had GPS apps to help. I personally recommend All Trails for such navigation. The picture below shows Tina at one of many such spots where the trail just vanishes under the snow. 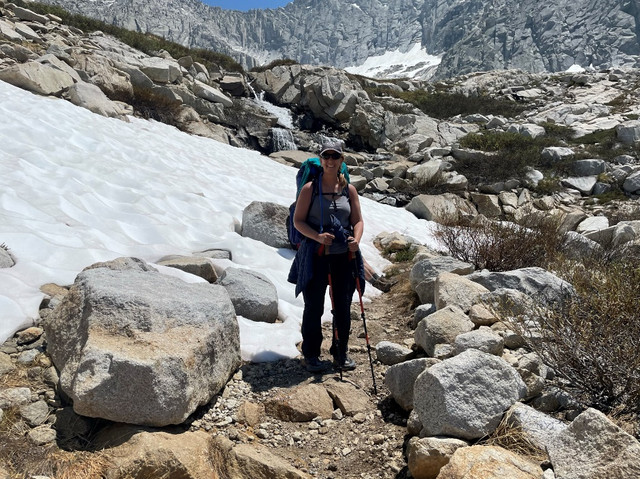 We passed numerous lakes on day two. Here is one high enough to be covered with a broken sheet of ice. 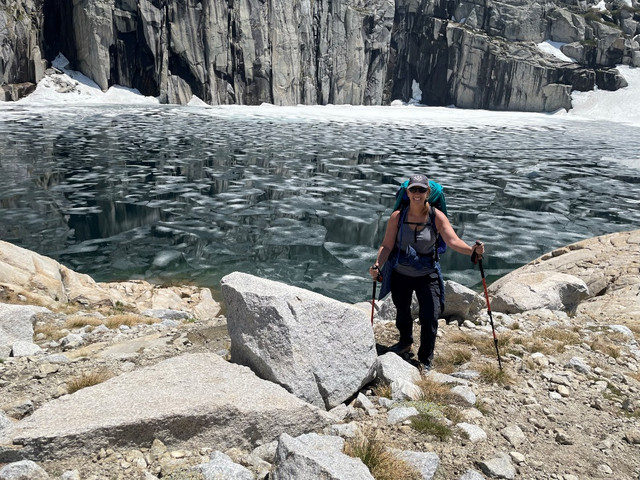 After crossing the Kaweah Gap, we descended, giving back most of the hard-earned altitude we gained earlier in the day. As we dropped back below the tree level, the trail descended into a large mosquito-infested meadow. What few hikers we encountered all warned us the mosquitos in this area were ferocious. Normally, mosquitoes leave me alone and bite by wife and kids instead. However, without them around, they made a nice meal out of me. Fortunately, Nolan had plenty of mosquito repellent with him. It helped, but some mosquitoes were still not deterred. My advice is such situations is to cover as much of your body as possible with clothing. 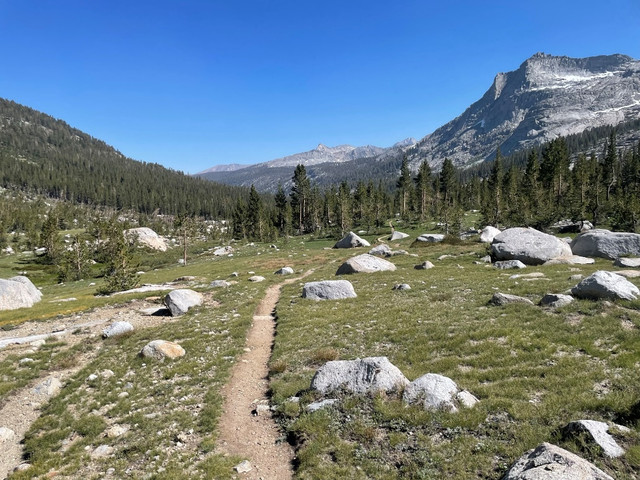 We finally made it to Arroyo (which means stream in Spanish) Junction where we set up camp among thousands of mosquitoes. In the picture below we see one of several abandoned cabins near our camp site. 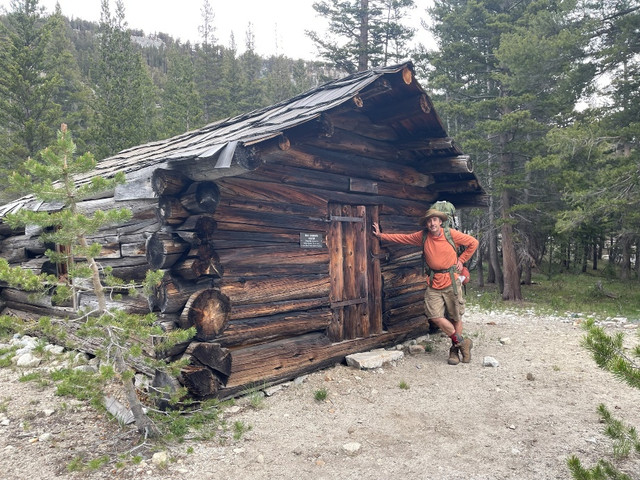 I tried to make a point of taking a picture of every camping spot, but I forgot on day two. The rock I’m sitting on in the picture below is just above where we camped in Arroyo Junction. Notice the stream in the background. Like the previous day, we had the campground all to ourselves. I found sitting on this rock just above our campground reduced the number of mosquitos by about 75%. 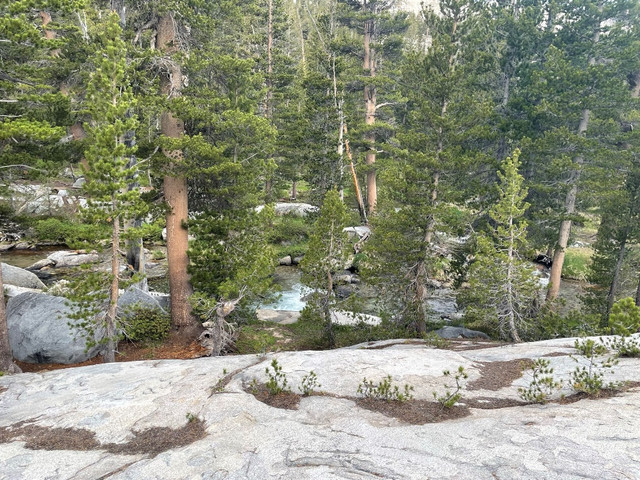 In closing, other than the mosquitos at the end, day two was spectacular. The trail went past numerous lakes and through different climate zones as we climbed and fell in altitude. If forced to say which of the six days had the best scenery, I would say day two, but the entire trip was gorgeous.