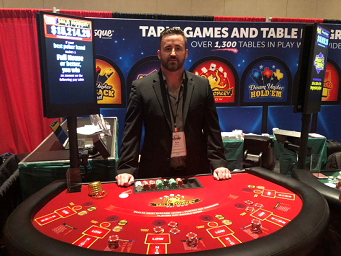 In this third and final part of my series on the Cutting Edge Table Games Conference I continue to look at most of the game presented this year.

First up is Kyle Morris' Wild Monkey pai gow. I think this is his first game that doesn't involve disclosing to players the range of the dealer cards. In this one, the player can surrender or double in pai gow poker. It is already has a placement at the Barona so I posted an analysis of it here: Wild Monkey Pai Gow. 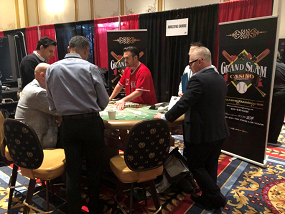 Next up is Grand Slam Casino Baseball. I don't recall the details very well, but it's a dice game where certain rolls advance a runner around the bases, with the goal of getting a home run. There was coincidentally another dice game, Diceball, using dice with a baseball theme right behind him, which I addressed in the last newsletter. However, the actual game play was a lot different. The game owner provided baseballs as swag, which caused a spontaneous juggling challenge, as seen here.

Next up is United States Paper Games. To be honest, I forgot the name of his game, but it involved a special deck of cards with ranks, suits, and colors. Unlike every other game at the show, it is a player against player game, like poker. I recall it involved bidding for extra cards. There was also a long list of the ranking of poker hands. The young man behind it, seen standing, was so earnest in his passion for the game. However, it took a long time to explain it and most attendees didn't have the patience to sit through the whole presentation.

His first attempt to explain it do me didn't go so well and I had to cut out half way through to do another interview. However, he asked me for another chance, to which we agreed on a five-minute time limit. I must say he did convey the basics of the games in about four minutes.

For any aspiring game inventors reading this newsletter, I highly recommend the Cutting Edge show. You will get a lot more out of it, I believe, than the Global Gaming Expo, which is dominated by the big distributers and more expensive. Not every game inventor will leave happy. However, it will be an opportunity to get honest feedback by table game executives. If you ask your friends for an opinion, no matter how bad the game is, they will say they like it. However, here you will sell your game the people who have the authority to put it on the casino floor, the people you need to like it. Whatever your reason for attending, if you go, I'll see you there in 2020!

That will conclude my three-part look at the new table games of the 2019 Cutting Edge Table Games Conference. My apologies to the few games owners whose games I didn't cover. In the coming months we will be releasing nine interviews from the show.