I’m proud to say I finally climbed Yosemite’s Half Dome last week! In my opinion, this ranks up there with the best challenging hikes in the US, right up there with Angel’s Landing in Zion and the rim-to-rim hike in the Grand Canyon. At 16.4 miles and 4,800 feet of elevation gain, it is not for the faint of heart. It is also not for the spontaneous, as permits for the last section are rationed to 300 per day and getting one is not easy.

I climbed it on September 10. With me for the first half was Mrs. Wizard. It was an extremely smokey day due to forest fires all over California, including another part of Yosemite. The picture below was taken from the valley floor. I didn’t have a permit, so I hoped there would be a lot of no-shows among those that did, due to the oppressive smoke. Sometimes the Rangers will let people climb it without a permit if it seems the daily quote of 300 won’t be met. 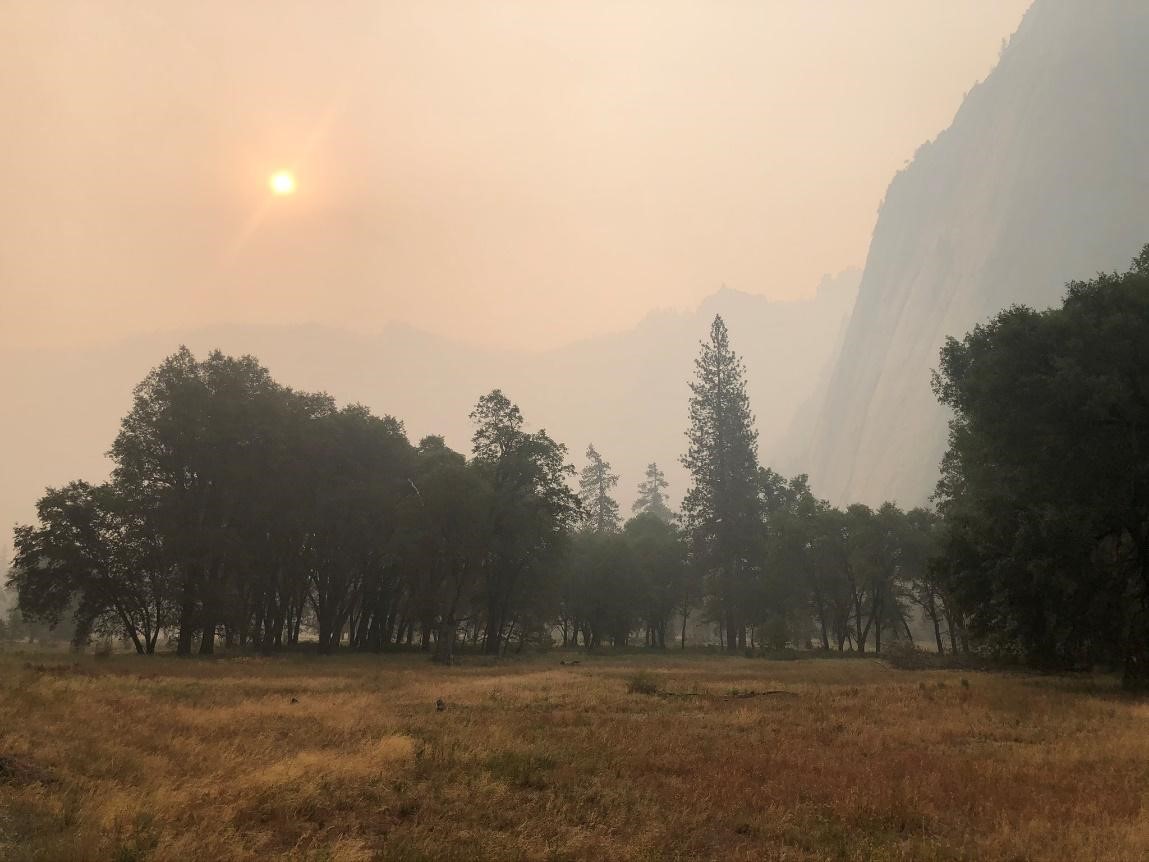 For those interested in getting a permit, 225 of the 300 are given out in a “pre-season” lottery, which must be entered in March. The rest are given away in a “daily lottery,” two days before the desired date to climb. In my experience, the chances of getting a permit in the daily lottery are low. I have failed three out of three attempts. Getting a campsite or lodging in Yosemite is also very competitive. I recommend planning any Yosemite trip at least six months in advance.

At the very beginning of the trail stood a Ranger who recommended against hiking anything due to the smoke, but added it wasn’t forbidden. He warned of all the dangers of smoke inhalation and to immediately descend if you felt any symptoms. After he got through his lecture on that, I asked about the chances of doing the dome section at the end without a permit. He hemmed and hawed a bit, saying there were a lot of no-shows the previous day and that he would probably allow it, but could not speak for whoever might be at the top. He also added they had two permits available. I then asked for one, which he said I could have, but did not give me anything to prove it nor took my name.

The trail begins at the Happy Isles Bridge, which also marks the northern terminus of the John Muir trail, another challenge on my bucket list. The first portion of the trail is known as the Mist Trail and is perhaps Yosemite’s most popular hike. It goes along a raging Merced River and past two of Yosemite’s best waterfalls – Vernal and Nevada. Speaking of waterfalls, by September all of them are dry or at significantly less flow than in the spring. This will explain why my waterfall pictures are not as impressive as they would be if taken in May.

I have done the first part of the hike, up to the Vernal Falls bridge, twice before in the last decade and it is a paved freeway of strollers, kids running in every direction, and the elderly and out-of-shape impeding traffic. However, this morning the number of people I saw in the first mile was one, a trail runner. The near empty trail was in part because we got started at about 6:00 AM, that the park was on very limited capacity due to the coronavirus, and the smoke. It was surreal to be a part of this beauty without seeing a number of tourists—like having Disneyland all to yourself. The picture below is the first waterfall you pass by, Vernal Falls: 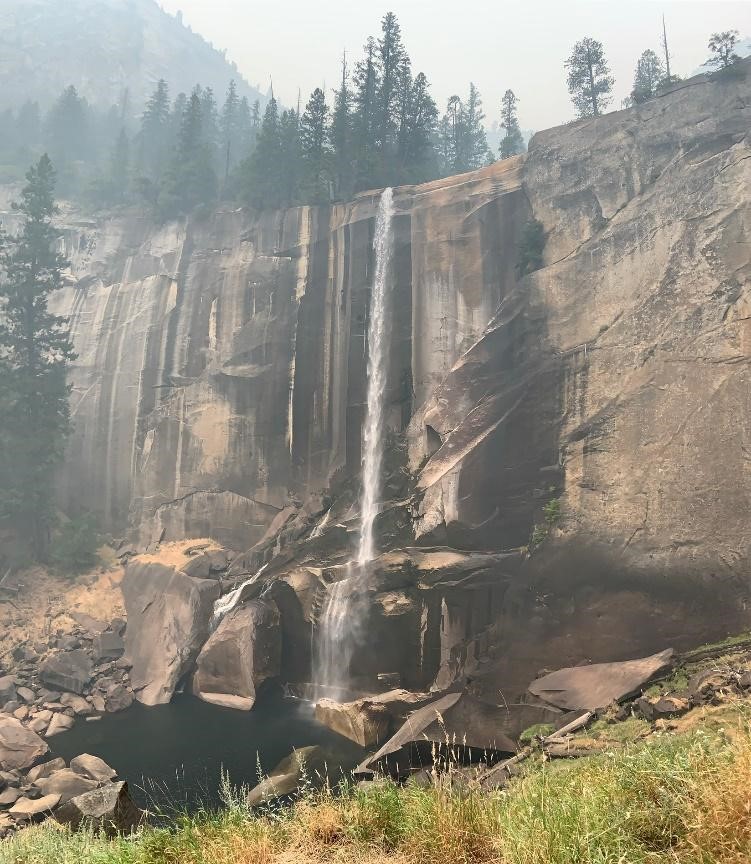 At the top of Vernal Falls are pools that seem perfect to cool off, but do not. People have been known to get caught in the current and taken over the edge. Most people do not make it past Vernal Falls, so the trail gets less crowded but more rugged. The next point of interest is Nevada Falls. It seems I forgot to take a picture of it for you, so here is one I took in 2015 which is a more true exhibit of the beauty of the sky: 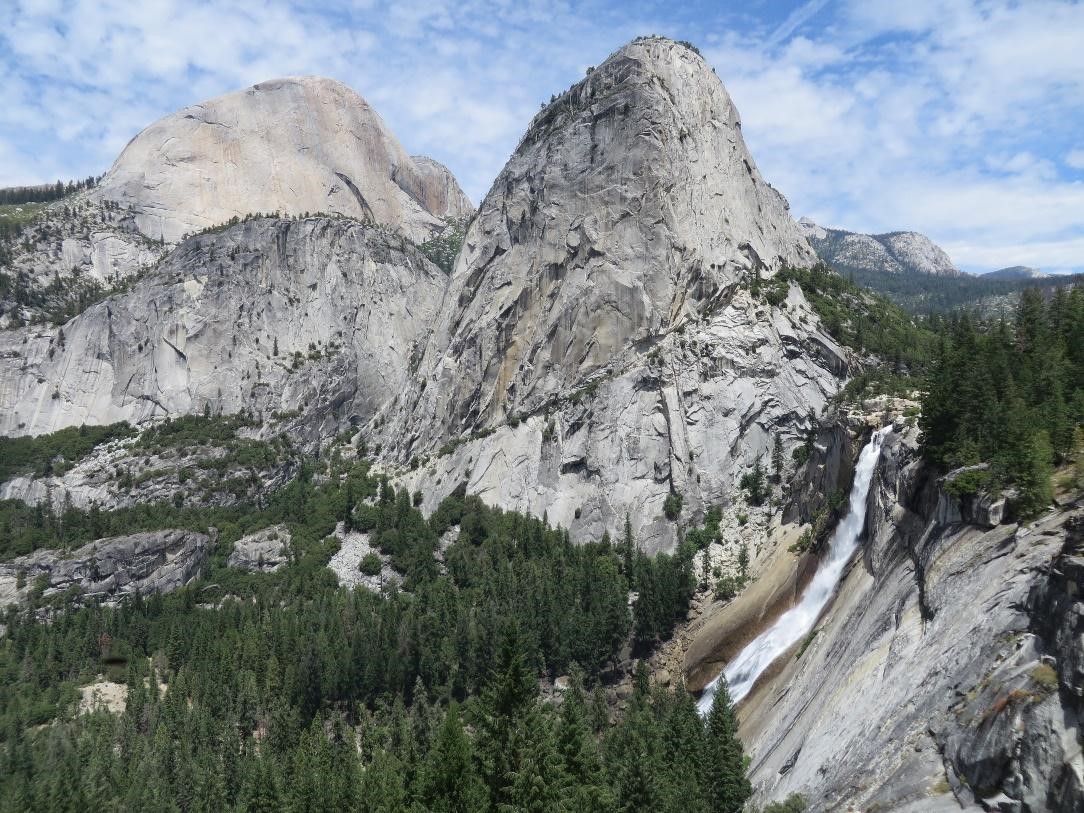 At the top of Nevada Falls, the trail suddenly turns almost level as it goes through the peaceful Upper Yosemite Valley. This is like a mini Lower Yosemite Valley, with the same Merced River cutting through it and surrounded by towers and domes of granite. However, after cutting through that section, it is back uphill through the forest. Here is a picture of a typical stretch. It was about this point that a bobcat passed me on the trail. Unfortunately, he went by too fast for me to get my camera out: 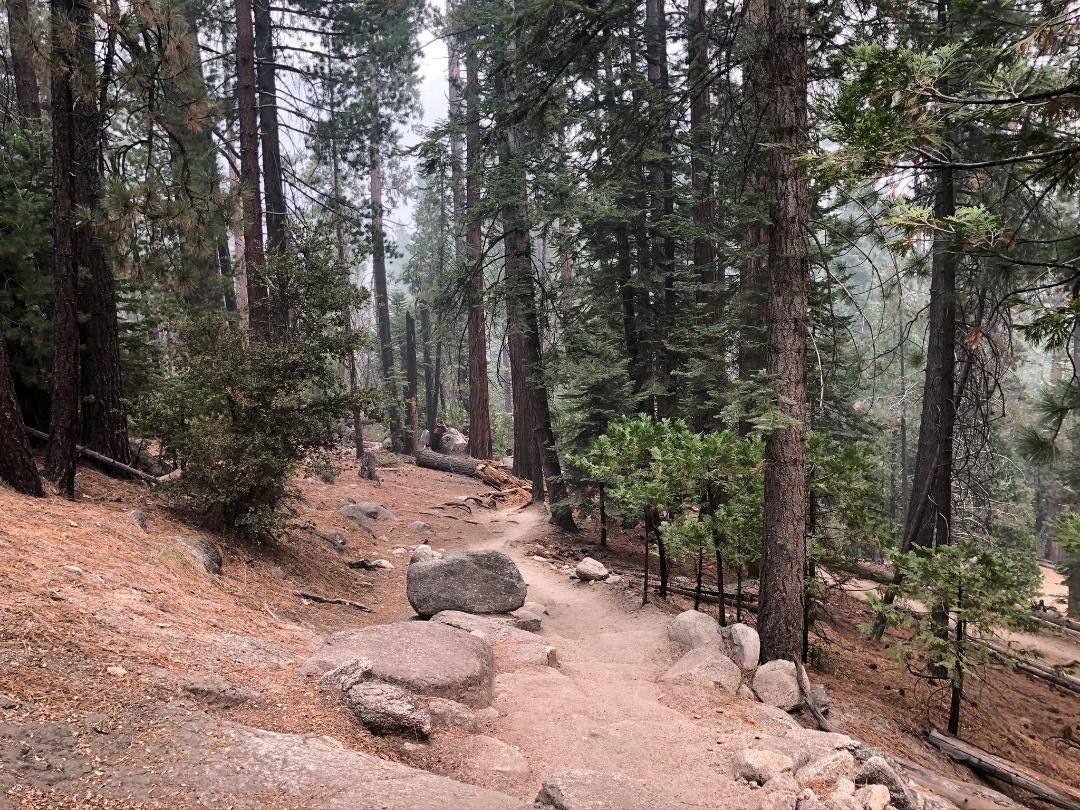 At this point I had gone further on this trail than I had ever before, and did not know exactly what to expect. This portion of the trail is rather long as it winds its way up to the base of Half Dome. As I hiked this portion, I rehearsed in my head what I would say to the Ranger who stands at the base of the dome, checking for permits. Hoping that with a good combination of logic and begging, the gatekeeper would let me pass.

Eventually, I made it to the base of what is called the subdome, a smaller dome behind Half Dome. It is here that a Ranger would normally check for a permit. However, I was happily surprised to see nobody at all. The sign warns that the penalty for climbing Half Dome without a permit is $280. I reasoned to myself I had an invisible permit given to me at the start of the hike. 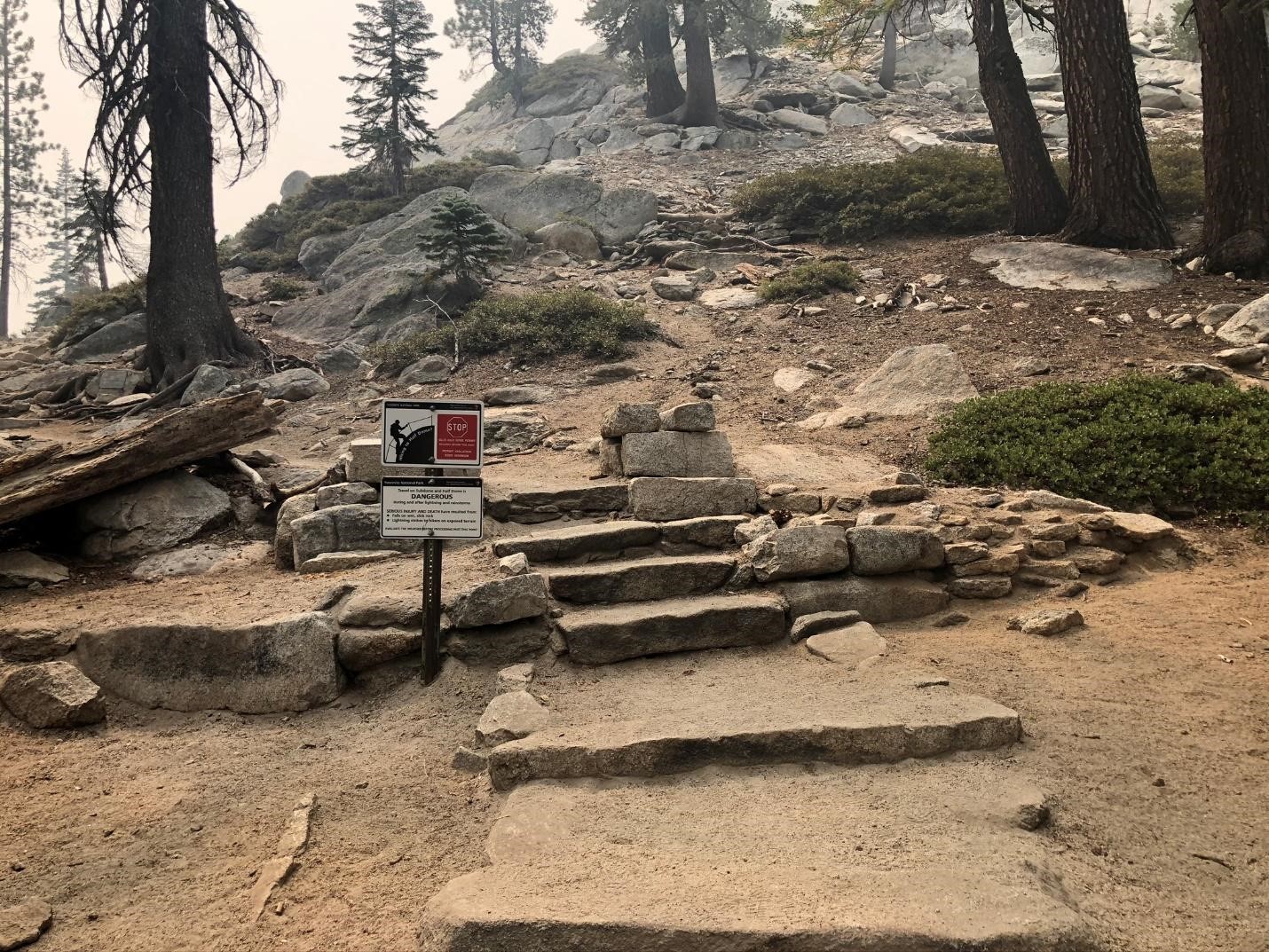 The subdome consists mostly of steps carved out of the granite. It also consists of a lot of middle-aged men huffing and puffing as they slowly make their way up. One of them told me they camped at the Upper Yosemite Valley, which is a good idea if 16.4 miles in one shot is too much.

The picture below shows a typical portion of this section: 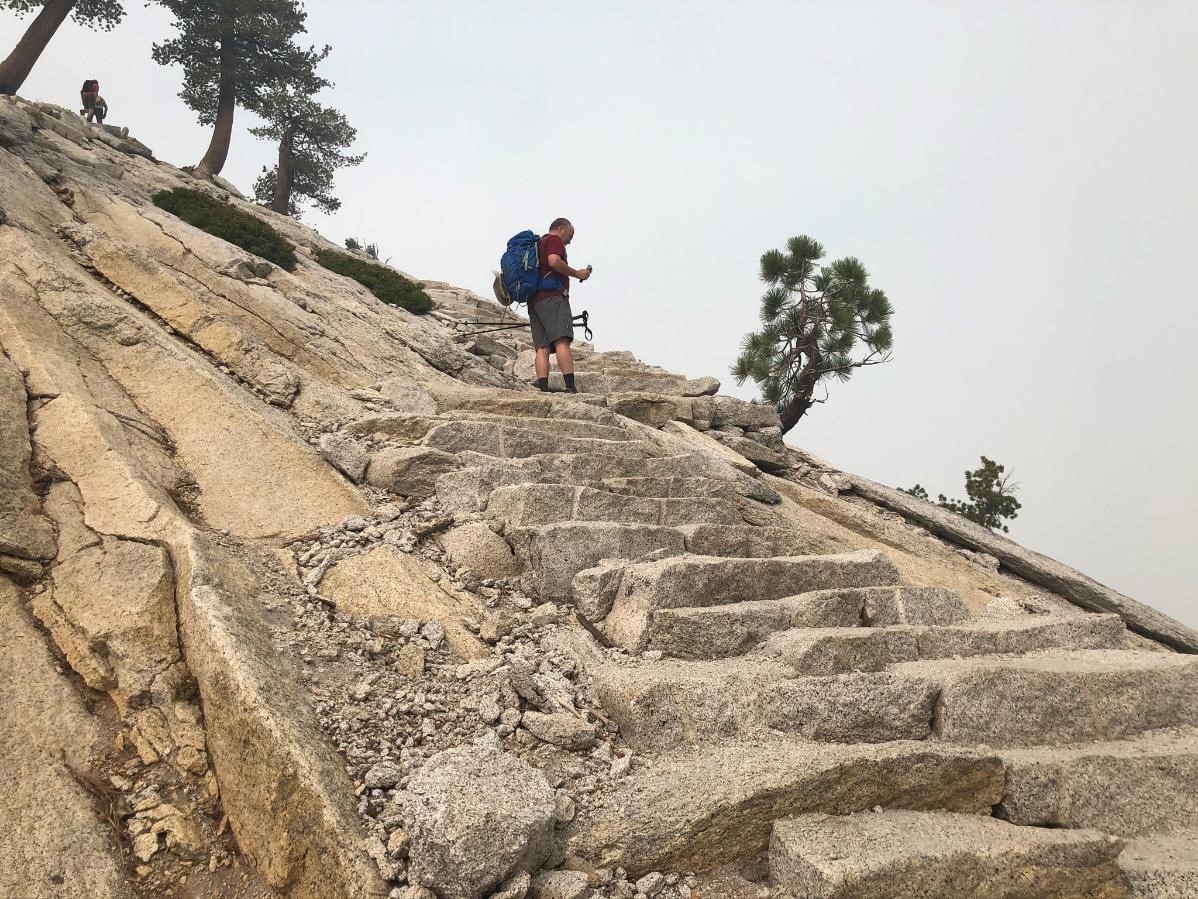 After reaching the top of the subdome, you descend a bit before coming face to face with Half Dome. This part of the hike is on a big chunk of slippery granite (especially when covered in a thin layer of ash). It is only with the aid of cables to hold onto that it is even attainable for the novice hiker.

Based on pictures I have seen, this portion normally looks like the LA’s 405 freeway during rush hour. Most people tend to reach this portion at about the same time, roughly 10 AM to 2 PM. However, on this smokey day there were only about 10-20 people on this entire section at any given time, 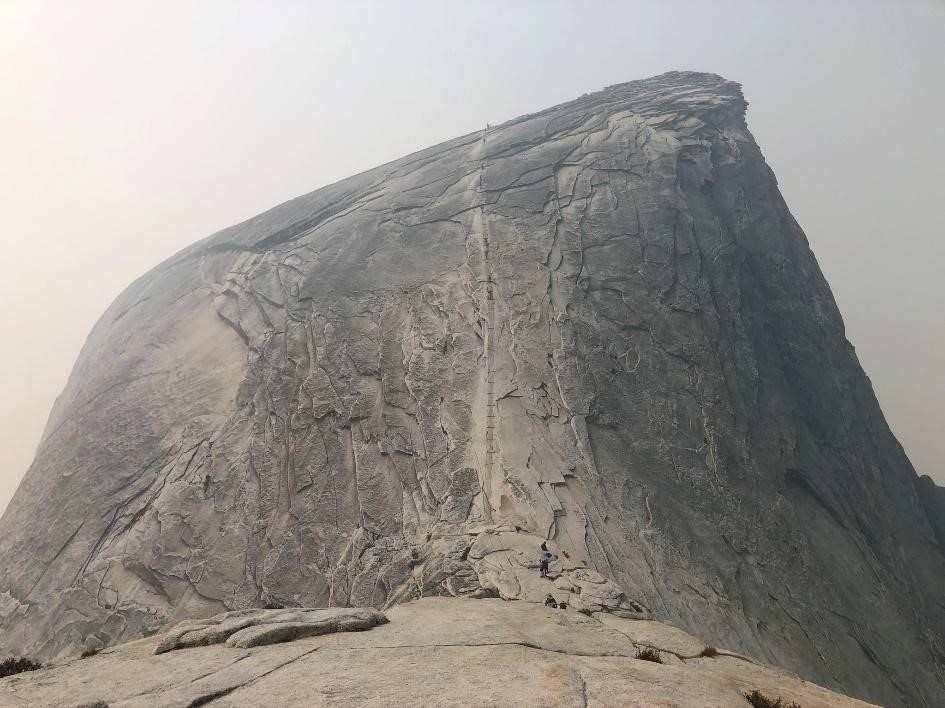 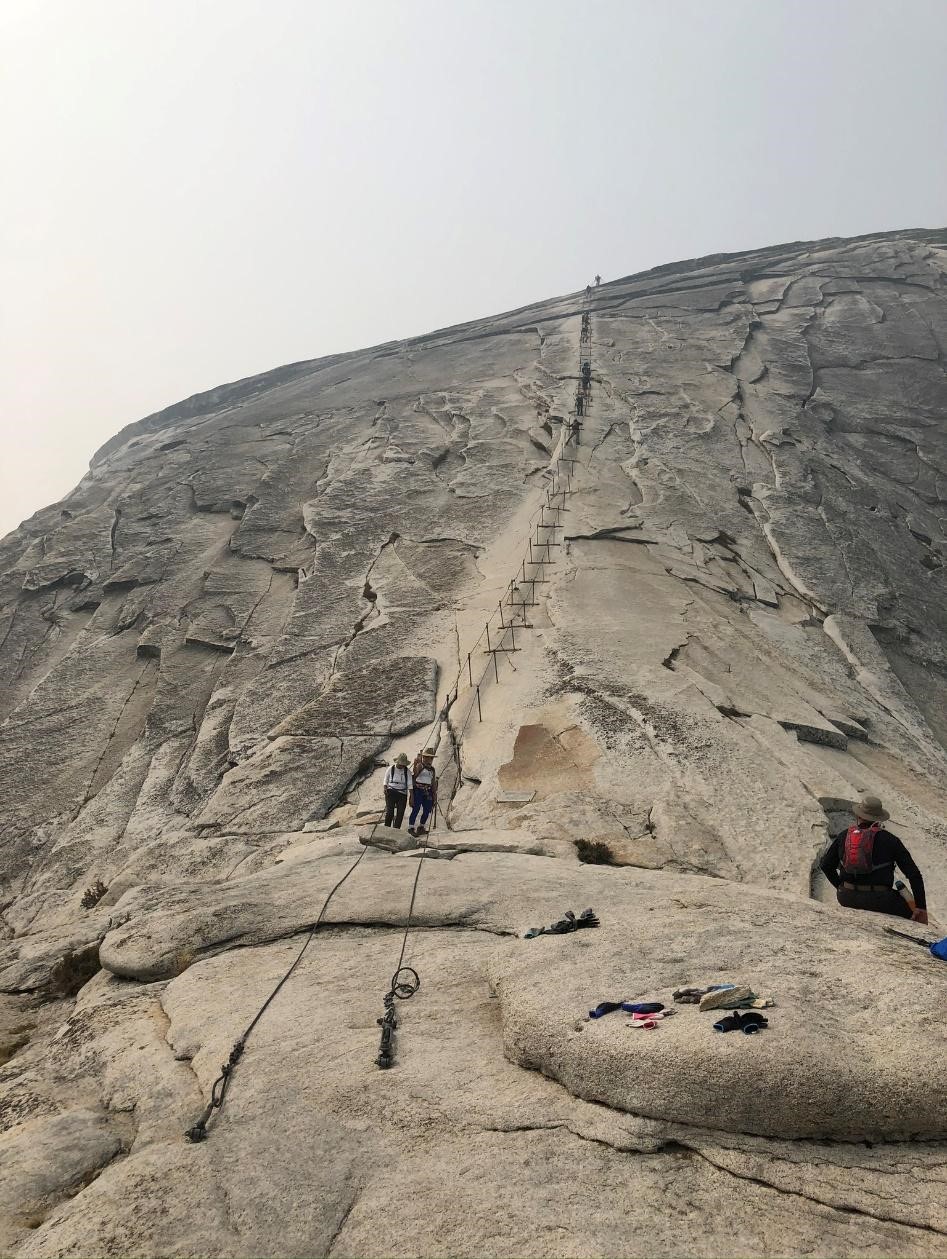 Despite not having the best of gloves and shoes, I went up anyway. It was slippery! Thankfully, there were boards between each pair of posts that supported the cables. I scampered up from board to board, catching my breath at each one. My advice to anyone who is nervous at this point, which clearly other people were, is to just do it. Don’t focus on the 20 deaths on Half Dome itself (source: https://www.yosemitehikes.com/yosemite-valley/half-dome/half-dome.htm) but on the fun and excitement of the challenge!

I got up without incident. Normally at this point you would be rewarded with outstanding views of the Lower Yosemite Valley. I was rewarded with views of nothing that smokey day. Note the white skies behind me in this summit photo: 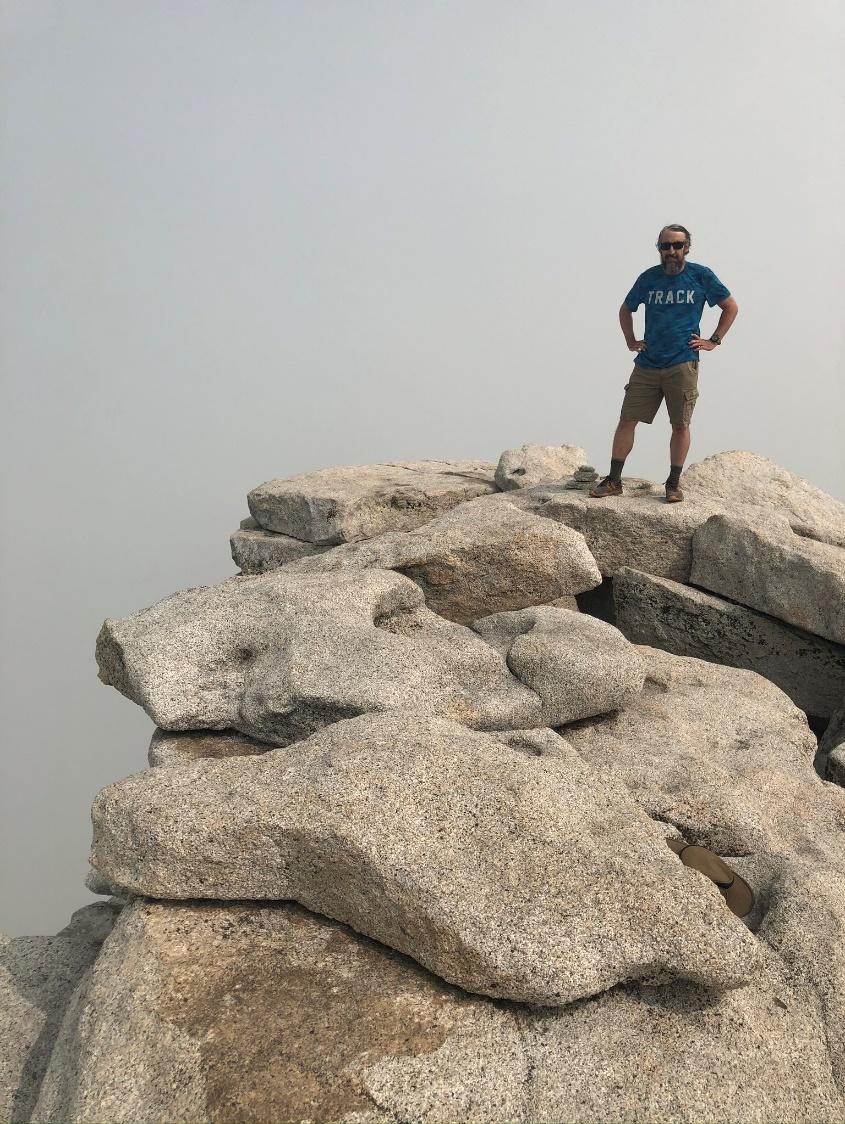 Going down I really wish I had appropriate gloves. The kind I had were light skiing gloves. I think best would be rubber industrial gloves and second best would be leather. Do not get anything with a smooth service, like mine. As to shoes, preferably have something with a rubber soul. Not the running shoes I had. I also noticed about one climber in four clipped into the cables with a carabiner that was connected somehow to his body with thin ropes or interconnecting slings.

I, of course, lived to tell the story. Going down face first, I got corrected by a couple people who recommended going backward. I will try it that way next time. The hike back down was uneventful. The whole thing took about nine hours. It would have been nice to celebrate with a nice dinner at the bottom, but due to coronavirus only take-out food was available.

In closing, although I am happy and proud to cross Half Dome off my bucket list, I’d like to do it on a normal day with clear skies and free of coronavirus restrictions. Perhaps I will enter the March 2021 lottery for a date in May, when the waterfalls will be flowing and before the summer surge of tourists hits in June.

In next week’s newsletter I plan to write about other things I did last week in Yosemite.

Wikipedia entry on Half Dome https://en.wikipedia.org/wiki/Half_Dome

The Half Dome hike https://www.yosemitehikes.com/yosemite-valley/half-dome/half-dome.htm