Home › newsletter › Where the Streets Have no People

Where the Streets Have no People 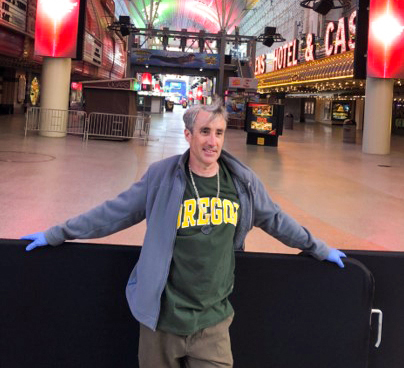 On Tuesday this week, Nevada governor Steve Sisolak ordered all casino closed by midnight and recommended the same for all other non-essential businesses. Since braving a game of Bingo on Monday, I have been mostly self-quarantined. However, this evening I decided to quit hearing about the how badly the Las Vegas economy was doing, but see for myself. So I headed to downtown to investigate.

I breezed through the downtown "spaghetti bowl" at 5PM on a Thursday, which is a sign that something is definitely amiss. Finding a parking space was not just easy, pretty much every park space on the street was available. I felt a little stupid paying for parking when there was plenty of it and I'm sure the police have better things to do than write parking tickets at this time. However, I respect the rules, so paid for my spot. 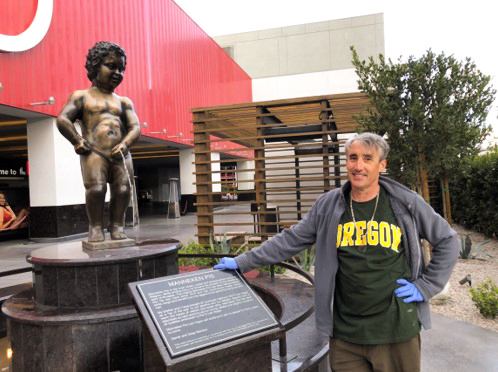 The weather was cold and windy, on the brink of raining, which it later did. As this photo shows, the pedestrian parts of Fremont Street and side streets were all barricaded off with security guards ensuring compliance. The lights on the canopy were on but no animation or music was happening. There didn't seem to be any other curious visitors like me. What few people I saw were probably homeless.

With Fremont Street shut down I walked up and down Ogden and Carson Streets. I was pleasantly surprised to the D's peeing boy at it. This replica of the Brussels' famous tourist attraction is often running dry on a good day, so seeming some sign of normalcy was refreshing. 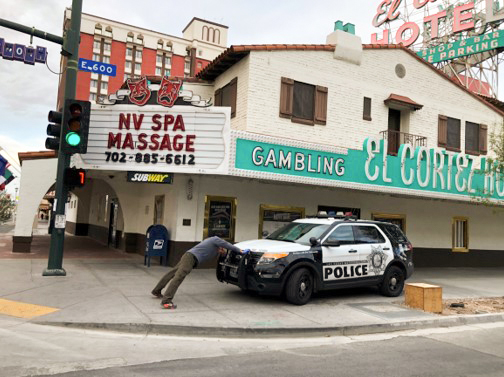 Crossing 5th Street (Las Vegas Blvd.) pedestrians were allowed back on Fremont Street. The Neonopolis, Denny's was open but for take-out only. However, a man handing out flyers told me the bar on the second floor was wide open and was the only bar open downtown. I had a look inside and there were only a few customers and several employees looking grateful somebody walked through the door.

Past that, a few restaurants around the El Cortez were accepting take-out orders only, but most were completely closed. At a Thai restaurant, one couldn't even enter to put in a take-out order, you had to call it in. Walgreens was fully open, but I consider that to be an essential business. 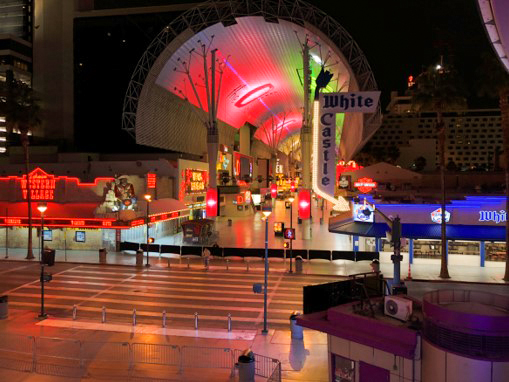 That is about all there is to report. There was almost nothing to do so I returned to my car and left. All things considered, I felt like a survivor from the book The Stand, in which 99.9% of the population died of a virus, but the immune were perfectly fine. It was hard to feel sorry for anybody, because almost nobody was around to feel sorry for.

In closing, this expedition may not be the best example, but I urge everybody to self-quarantine as best as possible and we will get back to normalcy sooner with fewer infections and casualties. I also recommend patronizing those businesses who are doing the right thing and paying their employees during this temporary shutdown. I plan to provide such a list in a future newsletter.