Obscure Topics in Betting the NBA 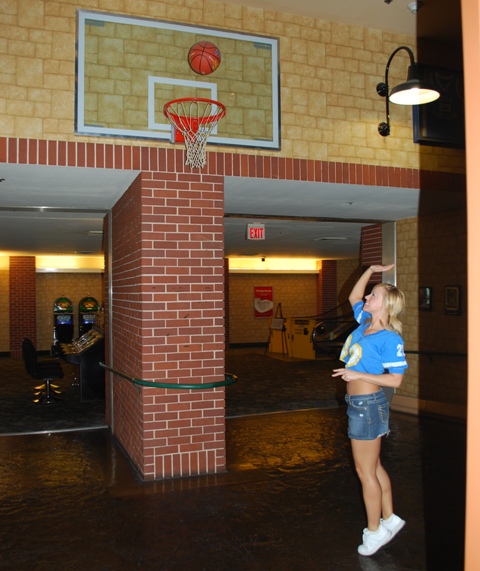 This page is meant as an appendix to my main page on Betting the NBA. When I created that page, it was based on data from the 2013 to 2017 seasons. In September 2018 I updated it was based on the 1987 to 2006 seasons. However, there were some obscure tables I didn't bother to update. I put too much time into them to just throw them away, so copied and pasted the content off to this page.

In basketball, as well as football, you can buy extra points if you risk more money. Most casinos in Las Vegas will at most let you buy a half-point, if you lay 120, instead of the usual 110. Some Internet casinos will let you buy or sell lots of points.

Before going further, consider the following graph, showing the probability for margins of victory from 1 to 20. Per the rules, a basketball game can never end in a tie. Also note the rather low probability of a win of one point, compared to 2 to 9. It is my understanding that the reason for this is that if a team is down by two points in the last seconds, with the ball, they will go for a tie, pushing the game into overtime, rather than attempt a 3-point shot. Starting at a margin of victory of 10, the probabilities start to drop off.

With a tie impossible, point spreads of -0.5, 0, and 0.5 would all be worth the same. There is also a relatively small benefit in going from -1 to 0, or 0 to +1, because of the low probability of a margin of victory of 1. Most sports books take this into account. At Bet365 and Olympic they jump three spots, going right from -1 to +1 when buying half points.

The following two tables show the number of points purchased (negative for selling points), the lines at Bet365 and Olympic, the probability of winning, losing, and a push, the fair line, and house edge at Bet365 and Olympic. The first table assumes the player always buys the points, except if the starting point spread is zero. The second table assumes the player buys the points only if buying them does not cause the adjusted spread to cross zero. Both tables assume the Bet365/Olympic rule where buying a half point off of -1 moves the spread directly to +1.

The house edges are lower for buying points in the second table, which shows that the bettor should not buy the points if it causes the point spread to cross a tie. However, if selling points, it is a good idea to cross a tie.

If your only choice is to buy one half-point, and lay 120, or buy none, and lay 110, it is a toss up. The house edge is 0.01% less buying none, but that is within the margin of error. At Bet365, the house edge is minimized buying 2.5 points, for a house edge of 2.05%. At Olympic, either buy just one half a point, or none at all. If you can find a sports books that lets you buy more than one half a point, and charges 10 cents for each, buy as many as they will let you.

Buying/Selling Extra Points on the Spread — Bet except if Spread Is Zero, or Moves across Zero

Buying/Selling Extra Points on the Total

The following tables show what basketball teasers pay at some sports books in Las Vegas, listed in order of best to worst odds.

If you must bet an NBA teaser, never cross or touch a tie. For example, on a 4-point teaser, only tease underdogs, or favorites of 4.5 points or more. Off of totals there are no significant numbers to avoid. The following tables show the probability of winning and house edge following this strategy.

The bottom line about NBA teasers is that they are usually a terrible bet, especially off of totals.

The following table shows what some Las Vegas sports books pay on off the board parlays, listed from best to worst.

Off the Board Parlays — Odds Survey

The next table shows the house edge of parlays, according to the number of picks and what it pays. This table assumes the probability each pick is correct is 50%, and ignores ties.

Off the Board Parlays — House Edge