Poker Burnout is a poker variation by Angel Espino. The object is to have a paying poker hand, which starts at a three of a kind. There is no dealer hand. The game features two decision points and the choice of playing any two of three hole cards, discarding the third.

Poker Burnout won second place at the 2017 Cutting Edge table game show in Las Vegas. As of this writing, in April 2018, it can be found at the Lodge and Saratoga casinos in Blackhawk Colorado.

There is not much known about the strategy at this time. Following is what little I know, based on a math report by GLI.

The following table shows my analysis of the Kicker bet. The lower right cell shows a house edge of 4.63%.

I would like to thank the game owner, Angel Espino, for his cooperation with the writing of this page, by sharing the GLI report with me and answering my questions. 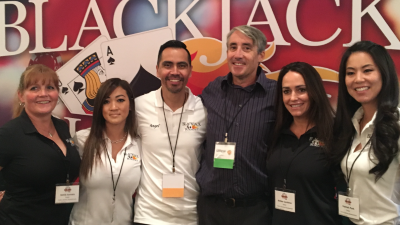