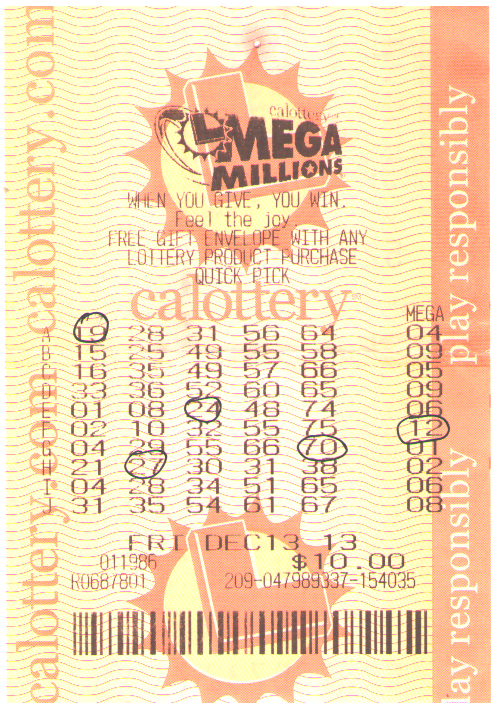 The Mega Millions is a multi-state lottery known for very large jackpots. It started in 1996 known as "The Big Game." Since then it changed names to "The Big Game Mega Millions" and finally just "Mega Millions." It has also gone through a number of rule changes along the way. This page addresses the rules effective after a rule change on October 28, 2017.

The rules were changed on October 28, 2017, increasing the cost from $1 to $2, making the jackpot harder to hit, with the intention of growing bigger jackpots. I suspect the rule changes were a response to competition from the Powerball Lottery. The rules of both lotteries are now very similar.

The following table shows the probability and expected return for all possible outcomes, assuming the player did not invoke the Megaplier option and a jackpot of $40 million. The return column is the product of the win, probability and 0.5. The reason for dividing by 2 is the cost of a ticket is $2. This table does not consider the factors of taxes, the annuity on the jackpot, and jackpot sharing. Some analysis follows the table.

* Does not consider the annuity, taxes, or jackpot sharing.

The following table shows the probability for each multiplier. The lower right cell shows the average multiplier for the Megaplier is 3.00.

The following table shows the probability and expected return for all possible outcomes, assuming the player did invoke the Megaplier option and a jackpot of $40 million. The win column is the base win, before applying the Megaplier. The return column is the product of the win, probability, average Megaplier, and 1/3 The reason for dividing by 3 is the cost of a ticket is $3 with the Megaplier. This table does not consider the factors of taxes, the annuity on the jackpot, and jackpot sharing. Some analysis follows the table.

The lower right cell of the table above shows the player can expect to get back 29.10% of his money at a jackpot of $40 million. The rate of return goes up by 11.02% for every additional $100 million in the jackpot with the Megaplier option. Before considering the annuity, taxes, and jackpot sharing, the break-even point, where the expected return would be 100% is $224,191,728.

The larger the jackpot gets, the more competition from other players it induces. It is actually a better value to buy tickets at a jackpot of 400 million than a billion, because the jackpot is more likely to get chopped multiple ways when the jackpot gets in that high.

To be specific, I find an exponential relationship between jackpot size and tickets sold when the jackpot is 400 million or less. The following graph plots ticket sales (vertical axis) by jackpot size (horizontal axis). 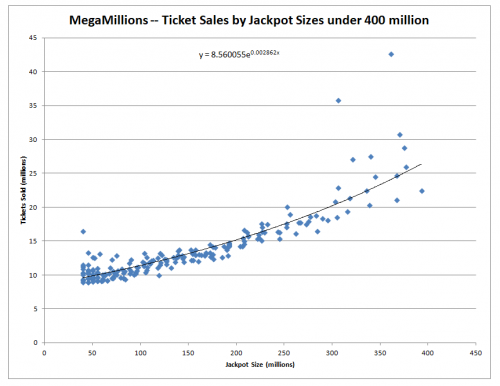 For jackpots over 400 million there is not much data, especially for jackpots close to a billion, as the following graph will show. The black line shows a logarithmic fit between the data points. 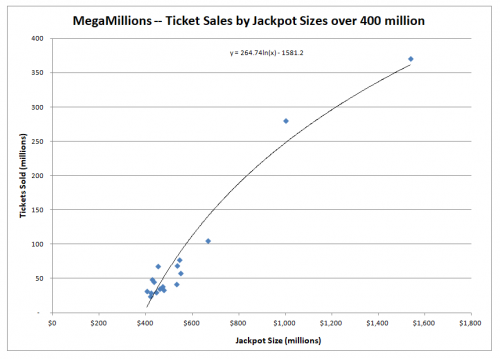 I put these least-squares regression curves into my Lottery Jackpot Ticket Sales Calculator. This would be useful to see how many other people you're likely to split a jackpot with according to the jackpot size. There are also Internet sports book that take bets on whether or not a jackpot will be hit.

So far all my analysis has been before making any adjustments for the annuity, taxes, and jackpot sharing. However, let's consider those things.

The most complicated part of this value dilution is jackpot chopping. The following table shows by jackpot size (in million) the estimated number of tickets sold, probability of at least one winner, expected share of the jackpot per winner, and the expected jackpot after any chopping.

Note that the right column in the table above is maximized at $732 million for a jackpot size of 1.3 billion. The closer estimate of the maximum jackpot size after chopping is $1.255 billion. Beyond that, the value goes down because of the induced demand for tickets and thus chopping the jackpot with more winners. In case anyone is wondering, I use parabolic regression to estimate ticket sales for jackpots over $300 million.

Taxes are also pretty easy. At the time of this writing the maximum federal income tax rate was 37%. State taxes vary quite a bit, but let's assume 8% for state and local taxes. That means that the winner will lose 45% to taxes.

There are three ways to play, as follows:

Again, ignoring taxes, the annuity, and jackpot sharing, the optimal strategy is to invoke the Megaplier option at jackpots under $224,191,728. At jackpots over this amount, the player should buy "jackpot only" tickets. Interestingly, at a jackpot of exactly $224,191,728, the expected return is the same for all three options at 49.40%.

Considering the effects of taxes, jackpot sharing, and the annuity, my advice is to buy the Megaplier at any jackpot amount and never invoke the Jackpot only option. The three factors mentioned significantly reduce the value of the jackpot.

Mathematically speaking, the Mega Millions is an awful bet. After considering the Lottery's cut, jackpot sharing, the annuity, and taxes, the expected return never gets much above 40%. I find the decision to buy lottery tickets to be entirely irrational, and I have yet to understand why people queue up to throw their money away.

Buy Lottery Tickets Online From the US