The Powerball is a multi-state lottery known for very large jackpots. It started in 1988 under the name Lotto America. In 1992, the name was changed to Powerball. As of this writing, Powerball can be played in 44 states.

The rules were changed on October 7, 2015 to make the jackpot harder to hit, and thus grow larger jackpots. The previous jackpot probability was 1 in 175.2 million. It is now 1 in 292.2 million. The full rules are as follows:

As stated above, all prizes in California must be paid on a parimutuel basis, meaning all prizes must be progressive in nature. The state withholds approximately 50% of all sales as profit and divides the other 50% as follows between the various prize pools. The lower the jackpot size, the greater its contribution rate will be.

There is no Power Play option in California.

The following graph shows the number of Powerball tickets sold (in millions) along the y axis by the jackpot size (in millions) along the x axis. The two black line show my estimate of sales by jackpot size. You can see the relationship is exponential through the jackpot of $529 million of Jan 6, 2016. From that point forward, I show a logarithmic relationship. If anybody has ideas of a single curve to fit the data points in the graph, I'm all ears. 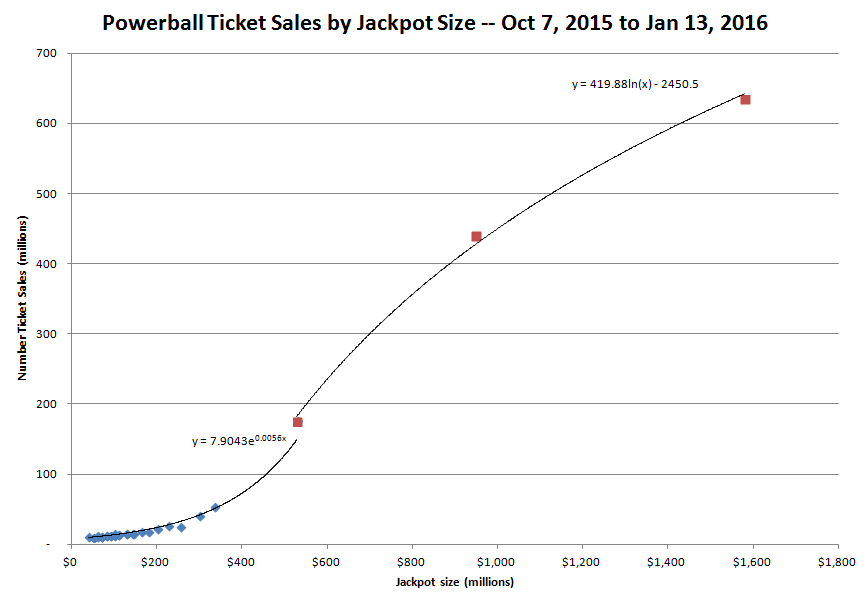 Return to Player by Jackpot Size (in Millions)

As stated in the rules section above, if the jackpot is under $150 Million a 10x ball is added to the Power Play hopper, resulting in an average multiplier of 119/43, or 2.7674%. The following table shows the additional win with the Power Play feature invoked for jackpots under $150 million. The pays column shows the additional win above the standard Powerball win. Remember that the multiplier for the $1,000,000 prize is always 2x. The lower right cell shows a return of 42.23%

If the jackpot is above $150 million, then the 10x ball is removed from the Power Play hopper, resulting in an average multiplier of 109/42, or 2.5952%. The following table shows the additional win with the Power Play feature invoked for jackpots over $150 million. The lower right cell shows a return of 38.95%.

Let me also clear up something. There is a pervasive myth that if a lottery winner dies before he receives all his payments, then any future payments will revert back to the lottery/state. The fact is that future payments will be handled in the same way as any other asset -- according to the winner's will. To quote from the Powerball web site:

Mathematically speaking, the Powerball is an awful bet. After considering the Lottery's cut, jackpot sharing, the annuity, and taxes, the expected return never gets much above 40%. I find the decision to buy lottery tickets to be entirely irrational, and I have yet to understand why people queue up to throw their money away.

Since California legalized the lottery in 1984, where I lived at the time, I have been preaching what an awful bet it is. What is the number of people I have likely saved? As far as I know, zero. Nevertheless, it is my calling to try. I won't go so far as to say that no lottery is ever a good bet. However, I hope I have shown here that the Powerball never is.

Buy Lottery Tickets Online From the US