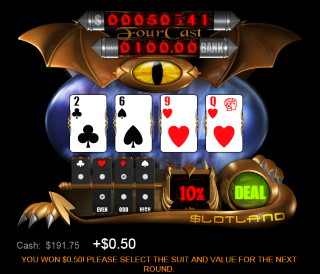 The creature playing this game
reminds me of the Newcomb Being.

Four Cast is one of the most unusual casino games I have ever seen. Normally I don't write about the really bizarre games, but Four Cast has been played at the Slotland and Win a Day Internet casinos since almost the beginning of Internet gambling.

The thrust of the game is the player has to make a forecast on the rank and suit of each of four playing cards. To make things easier, there are a couple jokers, which always result in a correct prediction and double the player's balance. The game starts with multiplying the player's bet by 100 but incorrect and partially incorrect answers will quickly diminish that balance. Whatever is left after four predictions is what the player gets.

Finally, there is a progressive jackpot that the player should be not be overly tempted by. The odds of hitting it are not determined naturally by the cards, as I explain below.

I have two pieces of advice regarding strategy:

The following table shows the expected return, assuming the player does not bet enough to qualify for the progressive jackpot and ignoring the effect of rounding down. The lower right cell shows an expected return of 89.457%. In other words, a house edge of 10.543%.

However, all that is moot because the jackpot isn't determined fairly by the cards. Since the odds of the jackpot can't be quantified, I can't justify ascribing any value to it, so I can't argue the return is any higher than 89.46%.

I am big on open and honest gambling. Part of that means electronic representations of physical gambling equipment like cards, dice and balls conform to natural probabilities, as if played in real life. By their own admission, Slotland and Win a Day do not trigger the jackpot in card games by the cards themselves. For this reason, Slotland and Win a Day are on my online casino grey list. At least they admit the jackpots are gaffed. If they didn't, they would be on the blacklist.