Deal & Reveal is a blackjack variant with a few twists. The main one is that if the dealer has a 2 to 6 up, then he will reveal his hole card before the player's turn.

The game began a field trial at the Palazzo in August, 2016. It was created by Geoff Hall, of Blackjack Switch and Free Bet Blackjack fame. The game is marketed by ShuffleMaster.

Deal & Reveal is based on conventional blackjack rules with the specifics and changes listed below. If two rules seem to contradict, then apply the one listed first. 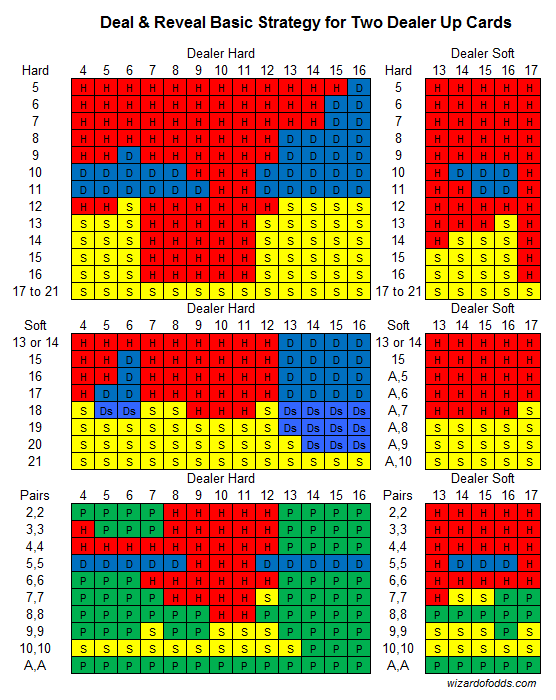 The next table shows the strategy against one dealer up card, which is the same as in regular blackjack against for four to eight decks and the dealer hits a soft 17.

The house edge, defined as the ratio of the expected player loss to the original wager, is 1.11%.

The house edge on the insurance bet is 8.06%. This is higher than the 7.42% in blackjack with the same six decks, because in Deal & Reveal insurance is offered only after the dealer removes an extra ten from the shoe.

In the interests of time, I analyzed Deal & Reveal in Excel, using an infinite deck and infinite re-splitting assumption. This led to a house edge of 1.165%. Then I compared my results against the math report by Daniel Dale, who did a combinatorial analysis. Our house edge and strategy were very close and I assume any differences were due to my infinite deck assumption. The strategy and house edge quoted here are from Daniel, whose work I trust.

I would like to thank ShuffleMaster for sharing their math report on the game. I would also like to thank Daniel Dale for his help in clarifying the rules to the game.

Discussion about Deal & Reveal in my forum at Wizard of Vegas.