Cribbage is normally defined as a card game played between two to four people with the goal of reaching 120 points. It is one of those games that is almost always played for money but usually small friendly amounts. I must have played in the thousands of games while I was in college. Unfortunately, since I graduated, I've been searching for 30 years for somebody to play with. It can be difficult these days finding anyone who knows the rules. Sadly, its a dying game. Sad because it is very exciting, social, and a lot of fun.

A few times over the years I've seen game inventors trying to sell their casino-ready version of cribbage. I write about one such entrepreneur in my report on the 2014 Raving table game show. As much as I respect trying to do something new in the table games sphere, I know on site the attempt is doomed to failure as cribbage is simply too complicated to quickly explain to a new player and those who do know the rules are dying off by the day.

While it may not appear at the Mirage anytime soon, you can now play a cribbage variant against the dealer at Internet casinos using 1x2 gaming software. Unlike the real game, there is no discarding, so it is completely a game of luck. So don't worry about throwing away the wrong card or counting your hand wrong. Just click the deal button and enjoy.

Following are the rules of the Cribbage game offered by 1x2.

The house edge comes only from the rule that if the Crib Card is a jack then the dealer will get an extra two points.

If the rules above scream out for an example, then I hope the following will help to clarify them. The player hand is on the bottom, the dealer hand on top, and the Crib Card on the left. 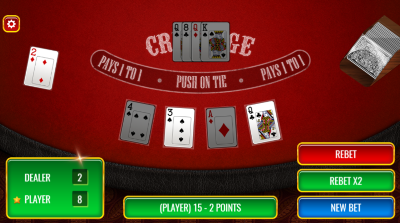 In the hand above the player has 8 points, as follows:

The dealer has only two points for the pair of queens. 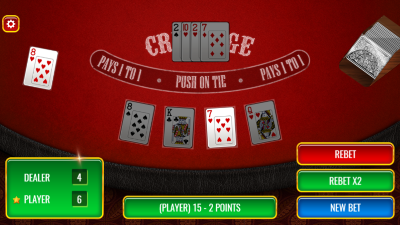 In the hand above the player has 6 points, as follows:

The dealer has two points for the 8-7 and another two for the pair of deuces for a total of four points. 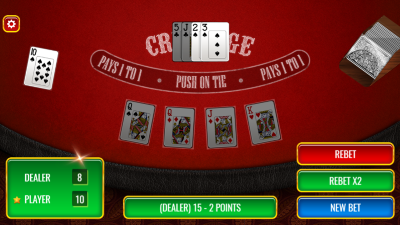 In the hand above the player has ten points, as follows: 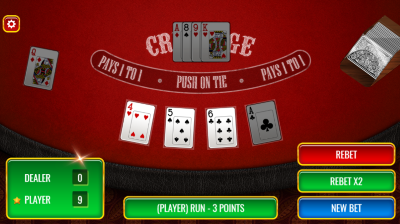 In the hand above the player has nine points, as follows:

The dealer has zero points.