Chemin de Fer is an antiquated precursor of modern-day baccarat. It would probably not merit much discussion as an extinct game, except for it was much loved by James Bond and I get asked from time to time what exactly Bond was playing. I believe the game finally went the way of the dodo bird in the 1990's. Still it deserves a proud chapter in gambling history and I am happy to help write it.

To avoid confusion, when addressing the hands of Player and Banker, I will use capital letters and usually say Player Hand or Banker Hand. When referring to a human player or banker, I will use lower case. First I will go over the scoring rules, which are the same as in baccarat and then go over the procedural rules. If you are already familiar with baccarat, you may skip the scoring rules.

Sources differ on some of the rules. I will restrict my analysis to two sources. Other sources seems to copy from one of these sources or other.

The Scarne scoring rules are as follows. 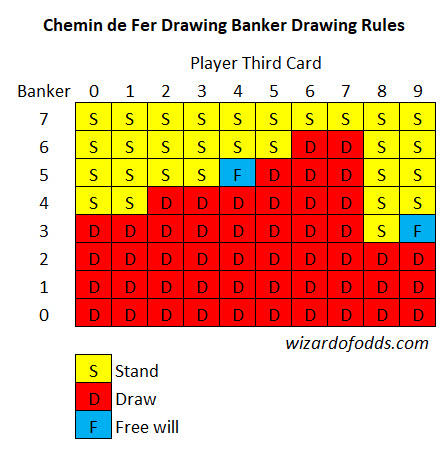 Where the Fleming rules are different is that both sides had free will, barring either side having a natural. However, Fleming seems to indicate that there was a fairly rigid way the game was played, where protocal dictated how to play most hands, leaving few up to free will.

The procedural rules are as follows.

Between three free will situations in chemin de fer, there are 2*2*2 = 8 sets of combinations of outcomes on a winning Player Hand, Banker Hand, and a tie. The following table shows those combinations for all eight ways the two sides might play their free will hands.

The next table takes the combinations of the three possible outcomes in the table above and converts them to probabilities.

Using the same logic, how should the player acting on the Banker Hand handle a total of three if the player's third card is a 9? The table above shows the expected value is 0.000339 higher by drawing, regardless of how a Banker Hand 5 vs. 4 is played.

In conclusion, in all three situations with free will, the decision-making player should draw.

Although I have made my case the expected value of the game is greater on the Banker Hand if the banker hit a 3 vs. a 9, let's look at that situation specifically. The following tables look only at those hands where the Banker Hand has a two-card total of 3, the Player Hand drew a 9, and the player acting on the Player Hand draws on a two-card total of five.

Although I have made my case the expected value of the game is greater on the Banker Hand if the banker hit a 5 vs. a 4, let's look at that situation specifically. The following tables look only at those hands where the Banker Hand has a two-card total of 5, the Player Hand drew a 4, and the player acting on the Player Hand draws on a two-card total of five.

The following two tables show the possible outcomes of a two-card Player Hand total of five, assuming the Banker Hand does not have a natural and the banker will hit both a 3 vs. 9 and 5 vs. 4.

Banking Against a Player who Stands on Five

Forgive me if don't go into as much depth analyzing the the Banker Hand strategy if the player acting on the Player Hand were to foolishly stand on a two-card total of five.

This strategy reduces to the rules of baccarat. If these numbers look familiar, they are the expected values for baccarat. In other words, if two logicians played the limited free will variant of chemin de fer, it would reduce to baccarat strategy.

I should note that if we add free will to a Banker 4 vs. ace, then the player should hit on that. Under the limited free will rules described by Scarne, the Banker is forced to stand in that situation. If the Banker could hit a 4 vs. ace, the rest of the strategy would still be the same as above. The expected values would change, as follows:

Note these expected values are a little better for the Banker and a little worse for the Player. Why they make the Banker stand on 4 vs. ace (as bad play for the Banker), I don't know. Perhaps a mistake in the creation of the rules for baccarat.

Assuming both sides draw in every situation where free will is allowed, as they should, the following are the probabilities of each outcome, assuming eight decks.

The expected value on the Player Hand is -0.012351. After considering the 5% commission on wins, the Banker Hand has an expected value of -0.010579. These figures are the same as conventional baccarat.

The following is my analysis of chemin de fer, according to the rules in Casino Royale by Ian Fleming. The Doctrine of Chances by Stuart N. Ethier echos these rules as how the game was played in the early 20th century. As explained in the rules section above, Fleming said the game was played with six decks and free will in all situations, barring either side having a natural.

After much analysis, I find there are only six situations where the right play depends on how the other side plays. Here they are:

If two logicians played chemin de fer, they would both randomize their strategy, much like in rock-paper-scissors. In particular. In particular, here are the probabilities for both sides:

As long as at least one side plays the randomization strategy above, the following will be the overall expected values for both sides, again assuming a 0% commission on Banker wins:

I'd like to comment that Ethier draws a different conclusion that I do. This seems to be because he doesn't consider the Banker hitting on six, after the Player stands, to be something he is allowed to do. Instead, Ethier assumes the Banker always stands in this situation.