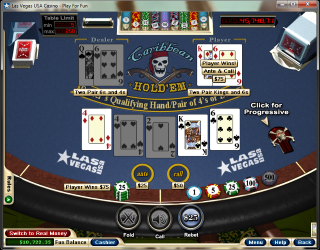 Caribbean Hold 'Em is the same thing as Casino Hold 'Em, except the Ante bet pays even money only if the dealer doesn't qualify. It also adds a progressive jackpot side bet. This version can be played only at Internet casinos using Realtime Gaming software.

If you wish to be paid the full way on the Ante bet, then look for Casino Hold 'Em, which can be found in land casinos in Egypt, Russia, South Africa, Holland, Latvia, Estonia, Ireland, Morocco, Malta, Ukraine, Panama and Romania. It is also available to play online at casinos using Net Gaming, Real Time Gaming, Playtech, and Galewind Software.

The Realtime Gaming rules are as follows:

The following is the Ante pay table. Remember, under Realtime Gaming rules, this pay table is followed only if the dealer qualifies. Otherwise, the Ante pays even money.

The following table shows the number of combinations, probability, and contribution to the return of all possible outcomes. The lower right cell shows a house edge of 3.09%.

The probability of being shortchanged with a flush or better and the dealer not qualifying is 0.702%, or 1 hand in 142.

I have not quantified strategy for Caribbean Hold 'Em. However, we can see from the return table above that the player raises 81.9% of the time.

There is also a $1 progressive side bet that pays based on the player's two hole cards and the flop only. The following is the pay table: