3 Card Fury began a field trial at the Green Valley Ranch in Las Vegas in June 2019. The game follows the same scoring as Three Card Poker and a similar betting structure as Ultimate Texas Hold 'Em, with two required bets and an opportunity to raise or fold.

The full title of the game is Advantage Play 3 Card Fury.

Following are two known pay tables for the 3 Card Monster. Wins are on a "to one" basis.

*: A Mini Royal is a suited ace/king/queen.

Following are two known pay tables for the 4 Card Royal Family Bonus side bet. Wins are on a "to one" basis. 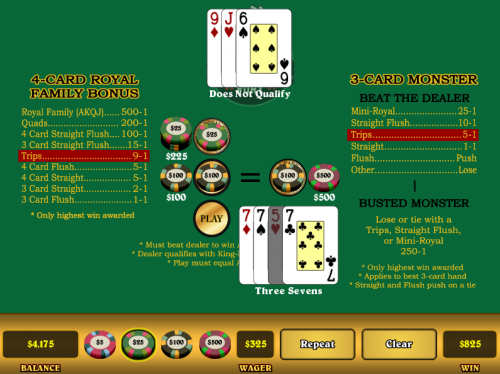 In the hand above, the player initially bet $100 on the Ante and 3 Card Monster, plus $25 on the 4 Card Royal Family Bonus. The player was dealt 7-7-7-5. The best three-card hand was a three of a kind, which obviously merits making the Play bet. The dealer had a jack high, which doesn't qualify. As a result, here is what happened to each wager:

See the external links below for a link to play the demo game pictured above.

If my explanation of the rules wasn't clear, here is the rack card. Click on either image for a larger version.

The player should raise with queen high or better.

The following are screenshots from the math report by BMM, showing the probability and contribution to the return of all possible events under pay table 1 of the 3 Card Monster.

The following analysis of Pay Table 2 shows a house edge of 3.50%.

This is a rare situation where I didn't do my own analysis. Rather, it is based on the math report by BMM, kindly provided to me by the game inventor and owner.

Discussion about 3 Card Fury in my forum at Wizard of Vegas.

I would like to thank Money$uit Industries for providing me with the math report for 3 Card Fury, with permission to use for this page.