Hi, I'm Mike Shackleford withThe Wizard Of Odds, and I'm here with Paul Harry with his game Super Easy Aces. Paul, can you tell me more about it.

The player has the option of:

Betting four bets on the table, the bets pay odds, and all they have to do is match their card with the particular bet that they're trying to get. 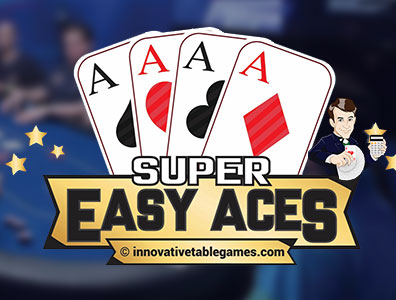 We have a modified deck, it's a little bit different.

In that deck, we have 25 aces, 12 twos, eight threes and seven fours. The four bets are the ace which pays even money, the two pays three to one, threes pay five to one, and the joker pays 25 to one.

The only card you want to avoid…

…is the four, which is what we call as "Shi", the death card. So, you don't want to have that turn up. Basically, you're going to get one card, that card is going to determine your win and loss, and then, as an option, we have a side bet, which is called the dealer's match and that means you want your card to simply match the dealer's.

That also pays odds as well, and that's basically the game in a nutshell.

Can I play a few hands? 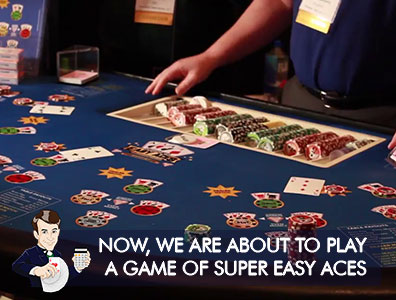 Now, we are about to play a game of Super Easy Aces

Now as we spoke earlier, this game has a specialty deck of:

The players are going to get one card, and that card is going to determine their win on the game.

Unfortunately, the young lady over here pulled a four, so that is the loser. Bobby here, he pulled the two which pays three to one, so he's happy.

Michael pulled the three of diamonds, it pays five to one plus it has a bonus because the card is a diamond. So, he is going to get paid there.

Now, we are going to do the dealer's match.

Before you turn the card over:

I want everybody to note that we have the four of clubs here. Debbie lost everything, but if Debbie can match the four of clubs, she's going to get paid 10 to one here. Let's see what happens. Debbie, you didn't get it. All right. No match.

That is basically the first round, and we move right on to the next round. Everybody places their bets again. You're trying to determine what card they think they're going to draw.

The joker, my goodness. Okay. Ace pays even money. Now, if Bobby had bet the joker, he'd get paid a 125 for a nickel. He's got to push on that bet so he doesn't lose anything, but it would have been nice if he'd have the joker.

Michael gets the ace for even money. Now, we will do the dealer's match. Again, if Bobby hadn't get the joker with the dealer, that pays 50 to one. Three of clubs, no match.

As you can see, this is a really super easy game. We would like people to sit and play, have fun, win a little, give the house their share, but occasionally people are going to walk away with a nice pocketbook.

All right. Okay. Michael really wants that four to come on the draw. Five to one for the three, no ace there, all right. The four takes everything. Come on, we need a four here, so Michael can win.