Video On How to Calculate the Odds in the Powerball

Hey, guys, this is Mike and you are going to learn how to calculate the probabilities in the Powerball. Everyone on my forum is complaining my videos run too long so I'm going to try to go through the math faster than I've done in previous videos.

Let me go over the rules real quick:

The lottery will draw five white balls numbered one to 69 without replacement, meaning that they can't draw the same ball twice and one Powerball from a different pool of balls that can be numbered one to 26. 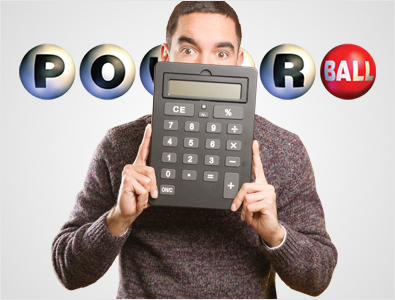 The player will do exactly the same thing and hope that his numbers match with those drawn by the lottery. I already put in the pay table here for the jackpot, I put in $100 million to just put in anything. This video is going to assume that you're already familiar with the COMBIN function in Excel which is the number of ways to choose say X items out of Y.

I recommend you watch my video on the probabilities in five-card stud poker which I just made yesterday.

What's the number of ways you can do that?

Now, let's look at the combinations if you didn't get the Powerball 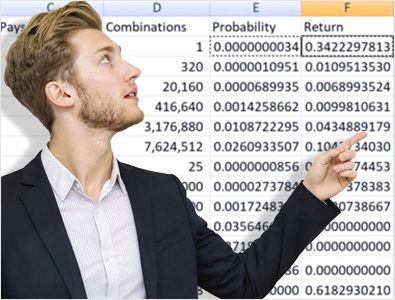 Now, let's look at the expected return of any given prize which is the probability of winning times the prize itself, and do that for every possible event. For a jackpot of 100 million, we see that for the $2 ticket you can expect to get back about 61.8 cents, that is equivalent to getting back about 30.9% of your money bet. Here we can see that the jackpot of 100 million contributes about 34.2% to that return. I mean, not percent, 34.2 cents to the value of that ticket. For every 100 million in the jackpot it's worth about 17.1% in expected return.

Now, before people say this in the comments, this does not consider three very important things:

that the rules in California are different, they don't have fixed prizes but everything is on a pari-mutuel basis. Yes, there you go. Bottom line, the Powerball like all lotteries are a horrible bet, I recommend you don't waste your money on them.

For more information about the Powerball, I have a great deal of information on it on my website Wizard of Odds, a whole section on the Powerball, it gets into the expected ticket sales by jackpot size and how jackpot sharing affects your odds. Yes, this has already run over as much time as I hoped, I will let it go with that.

Do you want to see your scrambled Rubik's Cube solved again? Use the online solver which can calculate the solution for you in seconds.