On Tuesday, March 1st, 2022 the Dallas Cowboys’ head coach, Mike McCarthy, expressed that their superstar starting quarterback, Dak Prescott, just recently underwent a surgical procedure on his left shoulder (non - throwing arm) last week. Prescott’s shoulder surgery should not interfere with the young and explosive quarterback's availability as well as participation in football activities, work outs, and any other NFL off - season programs.

Coach McCarthy revealed that Dak’s non - throwing - arm - shoulder injury was basically just an "irritant" to Prescott as the 2021 - 2022 NFL season unfolded, but he confirmed that he did not believe Dak’s left shoulder injury had any negative effects on their starting quarterback's play on the field last year.

The Dallas Cowboys head coach, Mike McCarthy, referred to Prescott’s left shoulder surgery as just a "cleanup." McCarthy expressed that Dak has been at the Dallas Cowboys practice facility known as “The Star” for his rehabilitation as well as workouts already along with several of his Dallas Cowboys teammates.

Dak ultimately decided to decline on playing in the 2021 - 2022 NFL Pro Bowl following a long pro football season last year in which Prescott was making a tough coming back from 2 - surgeries on the compound fracture as well as the dislocation of his right ankle that he suffered the season before last year’s NFL season, in addition to the right latissimus strain in which Dak suffered during training camp last year. 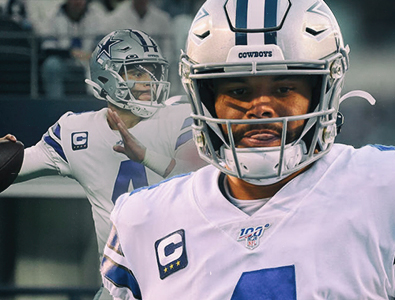 Last year, Dak set a Dallas Cowboys franchise record with a total of 37 - touchdown passes throughout the longer 2021 - 2022 season of the National Football League. Prescott also completed 410 - pass attempts which was good for an amazing 4,449 - passing yards.