Founded in the 90's, Play'n GO is an online betting software developer who's really come into their own over the past decade or so. The group is based out of Sweden. but also has offices in Malta and Hungary, and has become a trusted provider of games to very large internet casino brands such as bet365, NordicBet, Mr Green, and more. The group is regulated in Malta, and has developed an array of games including slots, video poker, fixed odds titles, bingo, and scratch cards. Along with high-tech visuals, the company also has an analytical background, providing fair games to players.

Play 'N Go calls their baccarat game "Mini Baccarat." Why they put in the "mini," I have no idea.

Standard rules are followed, including the stingy 8 to 1 odds on the Tie bet and six decks. That makes the house edge on each bet as follows:

There are two similar bingo games. Both are played on 3 by 5 cards. Both have the option to buy lots of extra balls if you're one away from a big win. They also both have a bonus game for covering a difficult pattern. The help files say both games have a return of 96%.

The standard blackjack game follows standard U.S. rules, which include:

The help file is correct in that the house edge is 0.46% with basic strategy. Click on the basic strategy image below for a larger version.

The European blackjack game follows standard European rules, which include:

The help file is correct in that the house edge is 0.66% with basic strategy. Click on the basic strategy image below for a larger version. 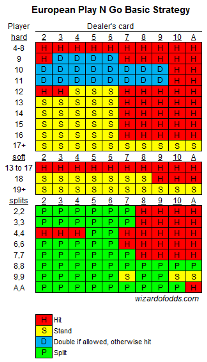 The Single Deck blackjack game is the first time I've seen the dreaded 6-5 rule in an Internet casino. I must admit, the other rules are very good, but they don't overcome the 1.4% cost of getting the short pay on a winning blackjack. The full set of rules is:

Update: A press announcement received after the date of this review says Play’n GO has a three-hand version of Casino Hold 'Em.

Play N' Go calls their Casino War game "Beat Me." They use six decks and follow the liberal MGM rule of paying both the Ante and Raise one to one in the event of a tie after a tie. This results in a house edge of 2.33%.

The Double Exposure rules are as follows:

The house edge under these rules, assuming proper Double Exposure strategy, is 0.98%.

Pai Gow Poker follows the usual rules, including a 5% commission and the dealer is always the banker. A house way button is kindly provided. I also like that winnings are not subject to being rounded down to the quarter, as at some places. Assuming the player follows the house way, the house edge is 2.72%.

Play N Go features three different roulette games. Mathematically, they are all the same single-zero game, with a house edge of 2.70%. They differ in the betting layout and some of the ways to make bets.

There are two scratch card games, as pictured above. The help file says the return for both is 96%. Both of them offer extra balls, at a price. They also both have a bonus game, although I earned it in Flying Pigs but no bonus was ever given. The bonus in Bugs Party was in the style of the Jackpot Party bonus.

The Play N Go slots are well done and designed according to land casino norms. The screenshots shown here are just a random sampling, there are lots more. Most are five-reel games and feature two bonusus — one free spins and the other some other kind of game. All of them have a bouncy fun soundtrack, which can get on your nerves after a while.

A confidential source shared with me the theoretical return of many Play N Go slots, as follows.

As a secondary independent source, our friends at Slot Tracker have crowd sourced their users to get an overall average of Play n' Go slots. Over 1,172,799 reported Play n' Go spins they report an overall return of 94.84%.

Triple Chance Hi Lo is unique game to Play N Go, although I've seen similar games by some of their competitors. The object is to choose whether a wheel numbered 1 to 13 will stop higher or lower than the last number. There are three reels to choose from and the player can re-spin if he doesn't like any of them. The lesser the chances of winning, the more you can win if you do. Click the link for all the rules and analysis. Bottom line is the best bet has a house edge of 3.77%.

The video poker offering by Play 'N Go is truly awful. Perhaps the worst I've ever seen online. However, at least they are consistent. Of the three games with a fixed pay table, the return never strays far from 95%.