This name goes by various names: Big Six, Wheel of Fortune, Money Wheel, Big Wheel, and Lucky Wheel. Whatever the name, it is a big vertical wheel where the player bets on the number it will stop on. The odds are conveniently the same as the number. For example, a bet on 5 will pay 5 to 1.

The odds are pretty bad but at least you can count it usually being staffed by the front door with an attractive well-endowed dealer. Just one of those Vegas traditions.

The Atlantic City is the same as the Las Vegas one, except they change one $1 position to $5, and the pay 45 instead of 40 on the two logos.

The Draft Kings rules the same as those of the Las Vegas and Atlantic city rules, except the two logos pay 50 to 1. That lowers the house edge on those bets to 5.56%.

In Macau there is a similar game. One or two wheels each can be found in the larger casinos. It does not seem to be a popular game there. The game wheel is the same size, but instead of dollars, it has colors. The table below shows the number of stops on the wheel, probability, and return for each bet. The table shows the best bet is tied for orange, purple, and green, at 7.69% each.

The Star City casino in Sydney has a similar game, called the "Big Wheel." Instead of money, it uses native Australian animals. As the following table shows, the house edge is the same on all bets at 7.69%. 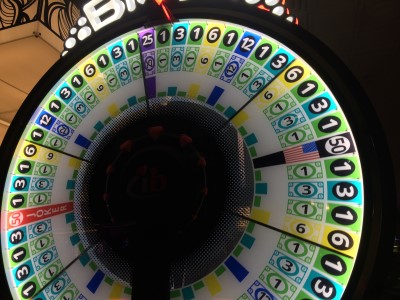 Aruze and Interblock are makers of electronic table games. They both make a Big Six wheel that are mathematically equivalent. The following tables show the bets available, the number of stops for each one, the probability of winning, and house edge.

In addition, Aruze makes another version with a $6.50 symbol instead of $6 and the Joker and Flag bets pay 52 instead of 50. This more liberal wheel I've seen at the Star City casino in Sydney, Australia. The full odds are below.

The house edge on both versions of the Aruze game is significantly less than standard Big Six, with a live dealer. 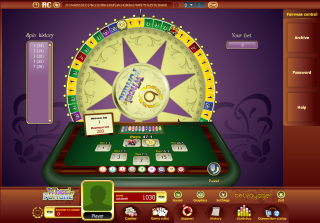 Internet casinos using Gamesys software have two wheel of fortune games. Both have a 49-stop wheel with prizes of $1, $3, $7, $15, $23, and $47. The following table shows the number of stops of each win, what it pays, probability of winning, and house edge. As you can see, every bet has a house edge of 2.04%. That is the best Big Six/Wheel of Fortune game I've ever seen, by far.

The also have a "zero house edge" version. In that game the rules are the same, except:

By changing one stop from a loss to a push on all bets, that does indeed make the house edge exactly 0.00%. However, there is a catch. The player must pay a 10% commission on any net win per "gambling session." Any break between bets of an hour or more shall end a session and no session may last over 24 hours.

Yet another Interblock product is titled "Big Six." It follows the same rules as the Australian version, except adds two more slices to the wheel titled "Super Spin." If the player bets on Super Spin and the wheel lands in one of those two slices on the wheel, then an electronic wheel in the middle of the big wheel will spin to determine the win. Possible wins are 20, 50, 75, 100, 500, and 1000. I do not know how this inner wheel is weighted. Company literature I obtained at the 2019 Global Gaming Expo indicated there are five different pay tables for the Super Spin Feature. Since then, I saw the game at the Resorts World casino in New York City.

The following table shows the return of each bet. Wins are on a "to one" basis. The table shows a return of 88.89% on all bets (or 11.11% house edge) except the Super Spin, which I can't quantify without knowing the wheel weightings.

There is a game at BetFury.io called Wheel that is another forum of Big Six. I believe it is made in house. Wheel has four different bet options. The following table breaks down the number of slices for each bet and the odds.