One item I recently crossed off of my bucket list was attending Oktoberfest in Germany. While there are many cities where celebrations occur; it is commonly considered that in order to qualify as “official”, it has to be in Munich and during the specified dates of the event. I finally made it there earlier this month, as part of a three-week trip to France, Monaco, and Germany.

Let’s start with some history: Oktoberfest originated in 1810 to celebrate the royal marriage of the future King Ludwig I and Therese of Saxe-Hildurghausen. According to my tour guide in Munich, the crowds at the original celebration partied for days and wouldn’t leave. Eventually, an agreement was made between the powers that be and the masses who didn’t want to leave such that if the partygoers went home that they would be welcomed back on an annual basis to celebrate the wedding anniversary. The clause was that celebration be kept to under three weeks. This tradition has been honored to this day; although, some years were skipped due to such events as wars and pandemics.

Oktoberfest traditionally lasts between 16 to 18 days. In 2022, it was held between September 17 and October 3. It may not be common knowledge that most of Oktoberfest is enjoyed during the month of September. The celebration takes place at what looks to me like an enormous parking lot in central Munich. A significant effort must take place to create 14 enormous structures known as “tents” as well as carnival rides that are so large that it is hard to believe they are not permanent structures.

Major brands of German beer sponsor the various tents. Entry is free. The drinking age in Bavaria for beer and wine is 16. Inside any given tent, you can expect a platform for the band in the middle surrounded by hundreds of picnic tables. About half of the tables are reserved. I heard that reservations should be made months in advance, and are expensive. Many of the reserved tables are sponsored by large corporations. The other half of the tables are a free-for-all; and after mid-afternoon, it is difficult to find empty spots to sit. Unlike the Hofbrauhaus in Las Vegas, which is a close replica of the original one in Munich, there is no one to help find a spot. Sometimes the tents will reach a maximum capacity and a line will form to enter. Guards will let newcomers in, as others leave. 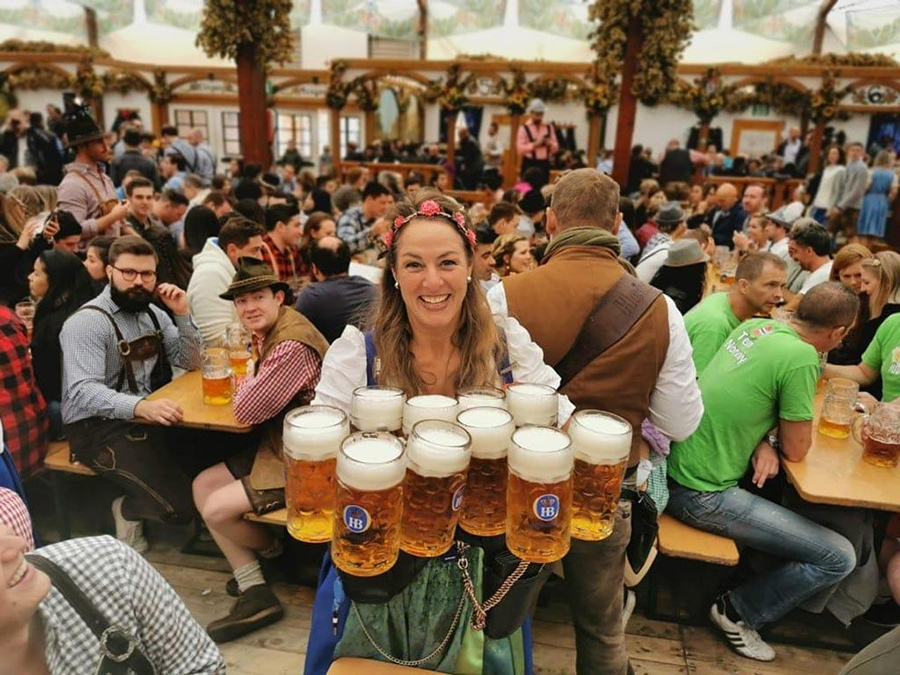 It must be a job requirement to be able to hold a lot of beer steins. There are no smaller options in terms of mugs. Beer keeps on being delivered one Beer Stein after another until you put a coaster on top, indicating that you don’t desire another one. Photo credit: Oktoberfest Tours

Once inside, the service is pretty good, considering there are thousands of people to serve. As mentioned, each tent is sponsored by a particular brewery, such as Lowenbrau. The only beer they will serve is their Oktoberfest brew, which I find to be rather light and low in alcohol content. Thus, the average guest will probably go through multiple liters. I personally drank three liters in about four hours, which is something I would normally never do and was only slightly inebriated when I left. There will also be a food menu. As I understand it, the most popular dish is a half-roasted chicken, followed by a fried pork leg. Of the two, I recommend the chicken.

Most bands seemed to play a mix of English and German pop songs. The bands were generally large with about a dozen musicians. I was expecting mostly German oom-pah music, but my assumption was proven wrong (as usual). I don’t know contemporary German music very well; though, roughly half the songs in English were well-known tunes like: “It’s Raining Men”, “Sweet Caroline”, “Take Me Home Country Roads”, “New York, New York”, and any of about two dozen ABBA hits.

It appeared that at least half of the guests were dressed in traditional Bavarian outfits, which you probably would never see otherwise. The ladies like to braid their hair. The men like to wear hats, preferably adorned with feathers of birds they have killed hunting. 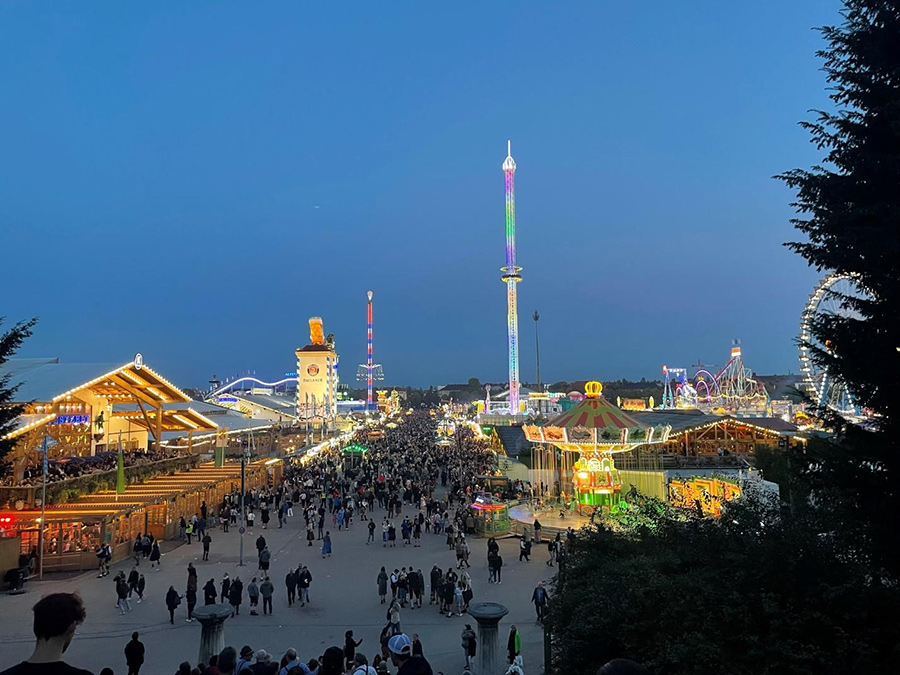 I captured this photo while looking down Beethovenstrasse, which is just one of several streets of the fairgrounds.

Other than the tents, there are a lot of amusement park rides, carnival games, haunted houses, mirror mazes and food vendors. Gingerbread hearts and pretzels are especially popular. I won some money from my friend Stephen gambling on shooting and throwing games. I also won some plastic roses and stuffed animals, which I gave to the waitresses.

My first day at Octoberfest was September 30, with my friend Stephen, who was very kind to drive down from Stuttgart to go with me and to the Neuschwanstein Castle, which I wrote about in the October 13, 2022 newsletter.

He had done his planning and took me to what was probably the one tent that played the most authentic German music. After playing some carnival games, we arrived at his carefully-selected beer tent about 1:00 PM. At this time, it was still easy to find a table. Another group joined us about an hour later. Besides the food, drink, and music, we enjoyed betting on such stupid things as how long would it take a worker to remove a tray and pick up a coin. 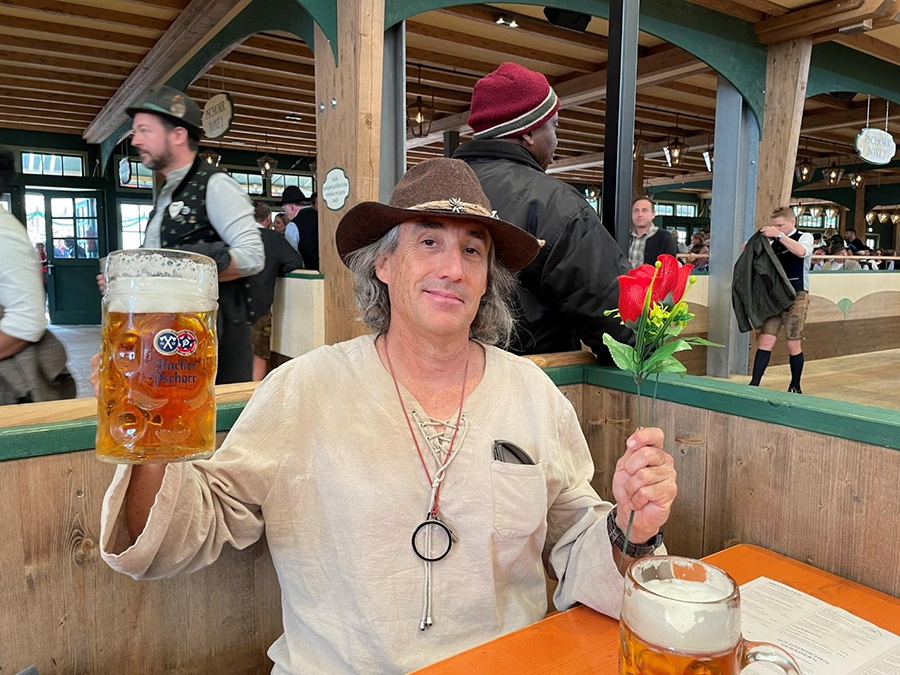 Here I am at my first day at Oktoberfest. I would later leave my hat there, never to be seen again.

The following three days, I attempted to climb the Zugspitze, the highest mountain in Germany. I may write about that in a future newsletter.

I returned on October 3, the last day of Oktoberfest. This time I was entirely on my own and arrived about 4PM. It was crowded. I think I entered every tent, looking for a place to sit, but was unsuccessful. Had I been more aggressive, I’m sure I could have squeezed in somewhere. However, my German is pretty awful and I am not a pushy person to begin with. I at least accomplished something in that I took some videos of the bands, which I later uploaded to YouTube.

At about 6:30 I entered yet another tent and went to the second floor at a spot with a lousy view of the band. I was surprised to find a table with only three Italian men who motioned me to sit down. One of them spoke decent Spanish so we were able to have a simple conversation. About half an hour later, two German college students joined us. They were both very social and spoke good English. I had a good time enjoying the last hours of Oktoberfest with them. Every day, they stop serving alcohol at 9:30 and close the tents at 10:30. I enjoyed their company so much that they accepted my invitation to dinner on my last night in Germany two days later. I hope they will not mind if I include this pixelated picture of them. 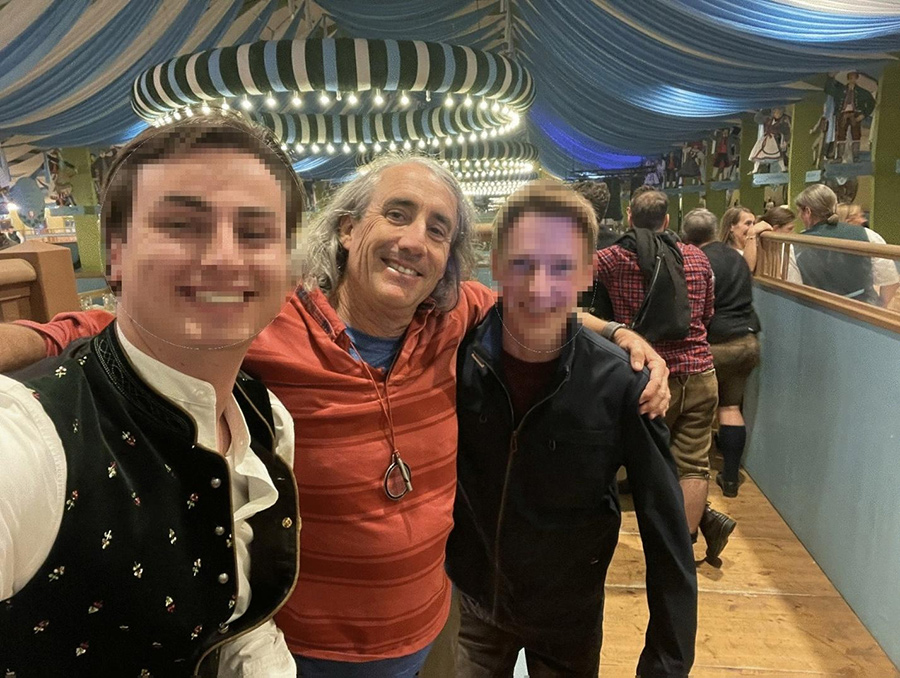 Let me close with some pictures of the brochure in English, to address more details and rules about the event. 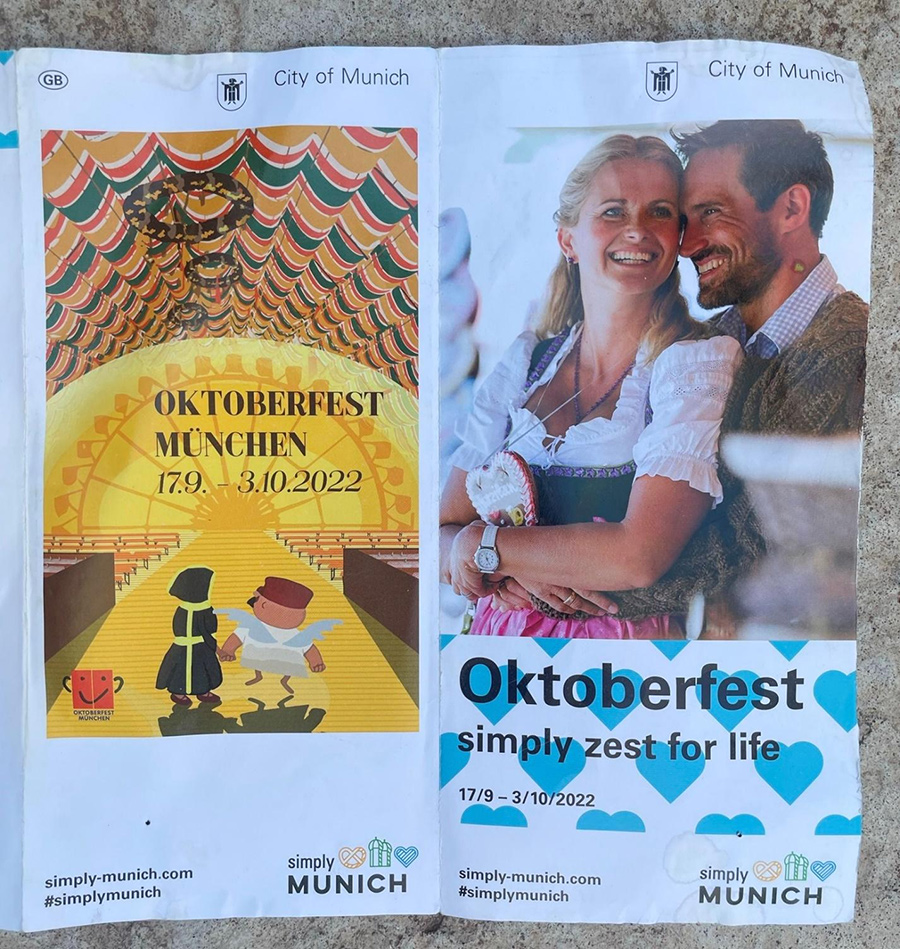 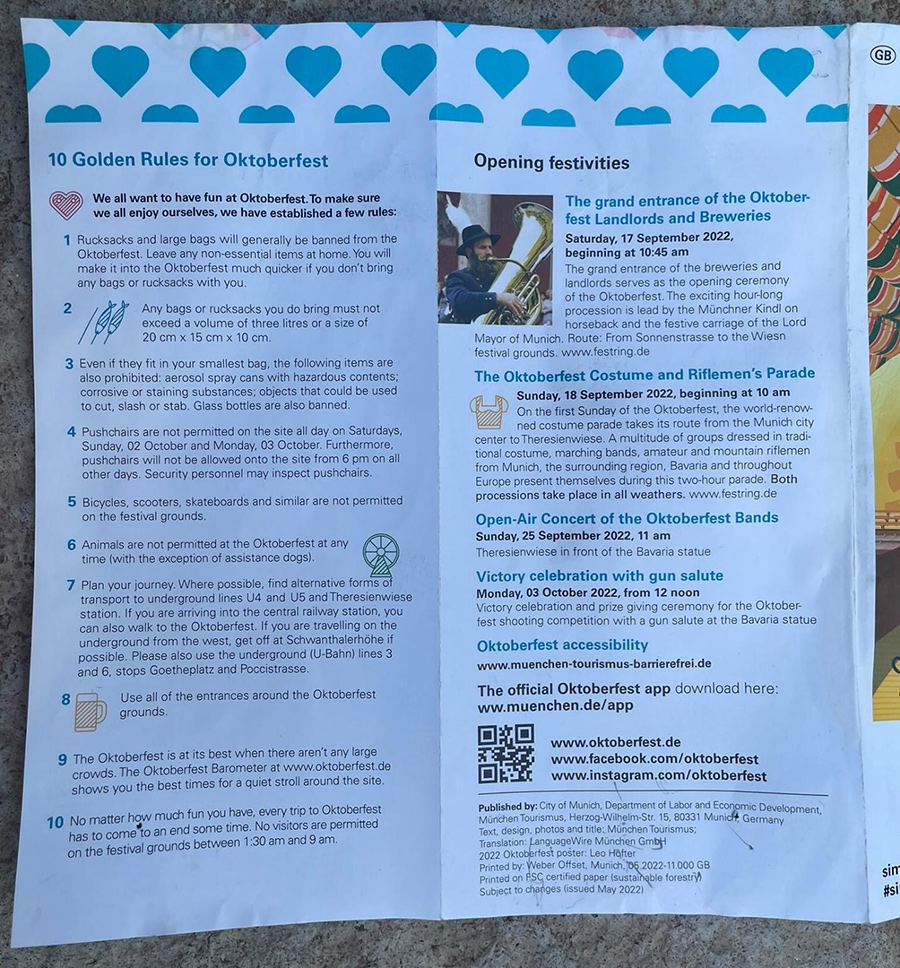 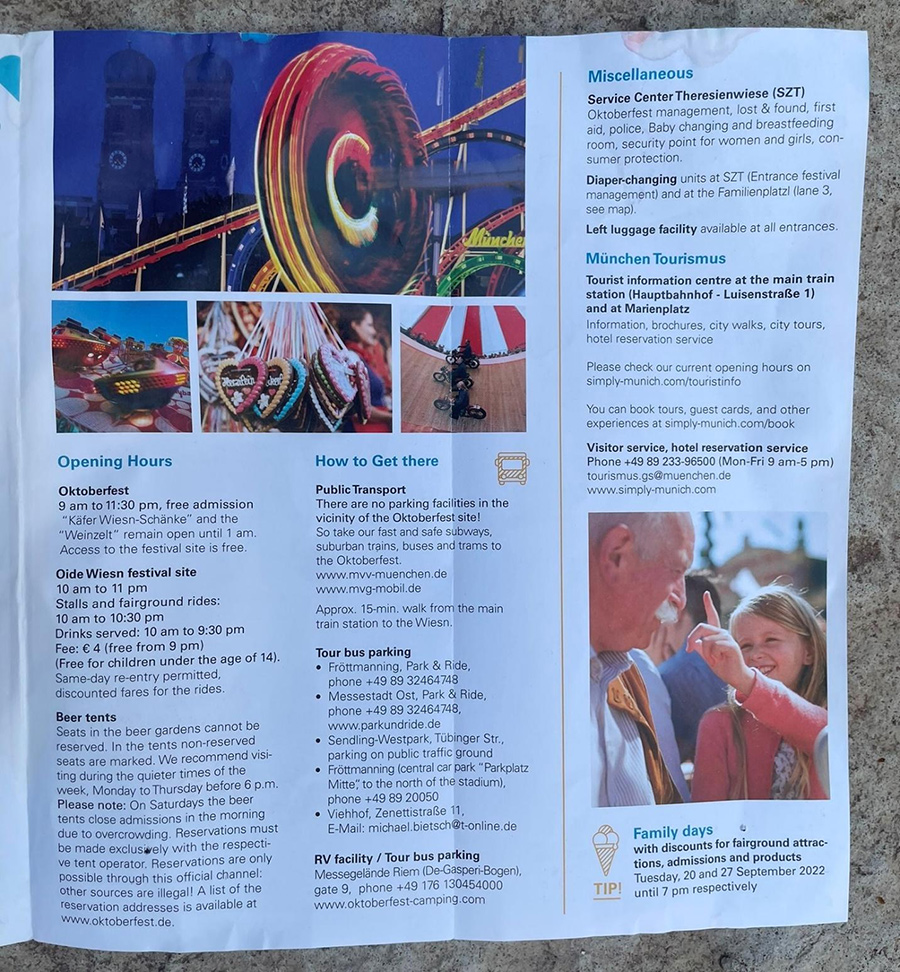 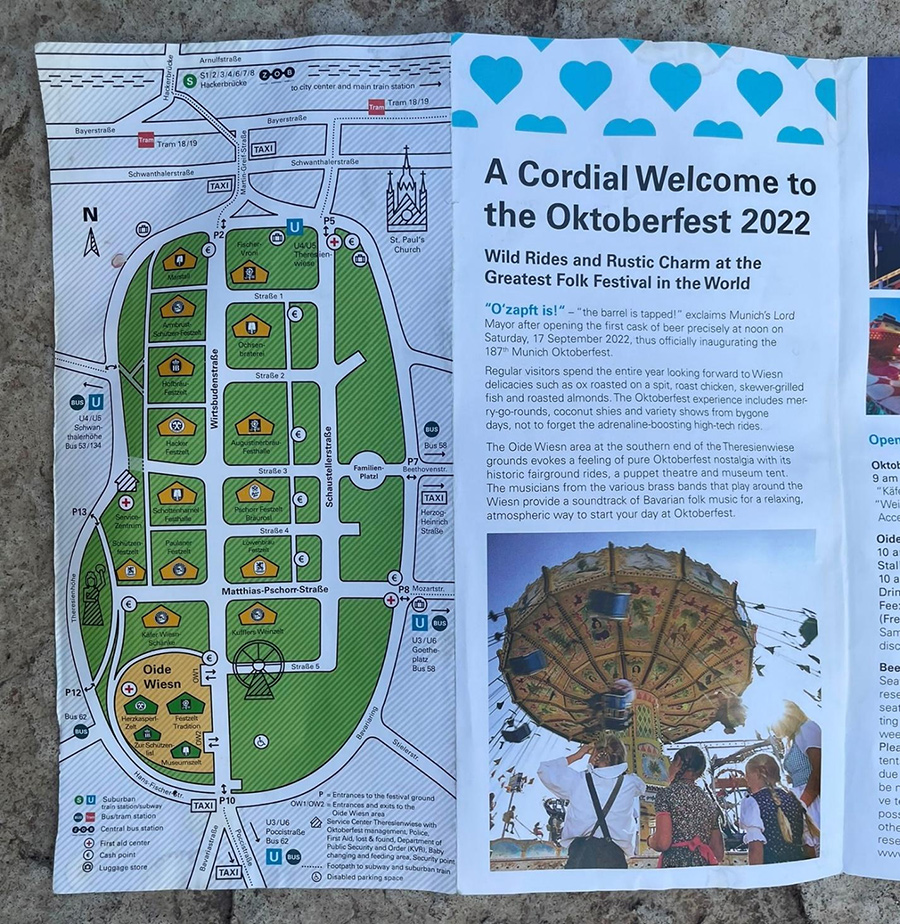 In closing, I had a great time at Oktoberfest and was proud to cross it off my bucket list. I would be happy to return again; not only for Oktoberfest. I love Munich and Bavaria, in general. I have been to northern Germany twice before, but I find Bavaria to be more fun and feel more like the stereotypical image of Germany.