Let me start by apologizing for a technical error in the last newsletter in which the weekly updates did not appear.

This week, I would like to share my trip to Santa Cruz Island with you. By way of background, I went to college in Santa Barbara. Every day I could see Santa Cruz Island from the beach, 23 miles away. I always said to myself that one day I would go there and maybe the other Channel Islands too. The fact that the dormitories at U.C. Santa Barbara, where I lived for two years, were named after five of the Channel Islands probably reinforced this goal.

Before going further, let me give a quick geography lesson of the eight California Channel Islands. Fair warning you will get quizzed on the names should we meet in person. 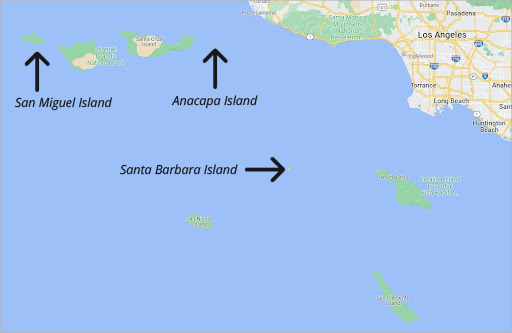 All eight of the Channel Islands are known as the Galapagos Islands of North America. Due to their geographic isolation, they contain many plants and animals found nowhere else on earth. The north four islands and Santa Barbara Island form the Channel Islands National Park (except for western Santa Cruz Island, which is owned by the Nature Conservancy).

My journey began at the Island Packers terminal in Ventura. There I boarded a boat to take me to Smuggler’s Cove on Santa Cruz Island. When Mexico owned California they abandoned prisoners there, some of whom made boats and got back to the mainland. This is how the harbor got its name. It would seem Australia is not the only prisoner dumping ground.

Once at Prisoners Harbor, we had the whole day ahead of us and only about three miles to travel to the campground, so we did a hike west, in the opposite direction, to Pelican Bay.

The next day we continued west for 11.5 miles to the Scorpion Ranch. This was a scenic, quiet and lonely trail into the clouds.

After much time hiking in the clouds, we finally descended into Scorpion Harbor. Here was a much larger campground that the previous one, a quarter mile from another pier with boat service. Activities available here were more hiking, kayaking, snorkeling, and scuba diving. I was supposed to go kayaking the next day, but it was very windy, making for big waves, so I did more hiking instead.

All things considered, I highly enjoyed my adventure to Santa Cruz Island. The backpacking was enjoyable and not that difficult. It was strange to be so close to Los Angeles, with ten million people, while enjoying peace and quiet and beautiful starry skies. It has inspired me to visit the other Channel Islands in the future.