The most active thread on the Wizard of Vegas forum since Monday has been about Jeopardy contestant James Holzhauer and his loss on Monday's show.

To set the stage, after 32 shows, James had won $2,464,216. His average win per show up to that point was $76,944. The all time Jeopardy winner, Ken Jennings, has held the record for years at $2,520,700. James was $58,484 short, which was less than his average daily win. Alex braced the audience at the start of the show for a possible new money champion to be crowned. Between James and that goal were two new contestants, including Emma Boettcher.

Emma employed basically the same strategy as James. Searching for the Daily Doubles early in the harder, higher value, questions and being aggressively wagering them in them. The first Daily Double was found in the very first clue, by James, who was limited to a meager wager of $1,000, per show rules. The second was found by Emma, who, in the style of James, bet all of her $7,600 at the time. She went onto find the third while modestly ahead and wagered $3,000, which I would argue was too conservative, especially against James. 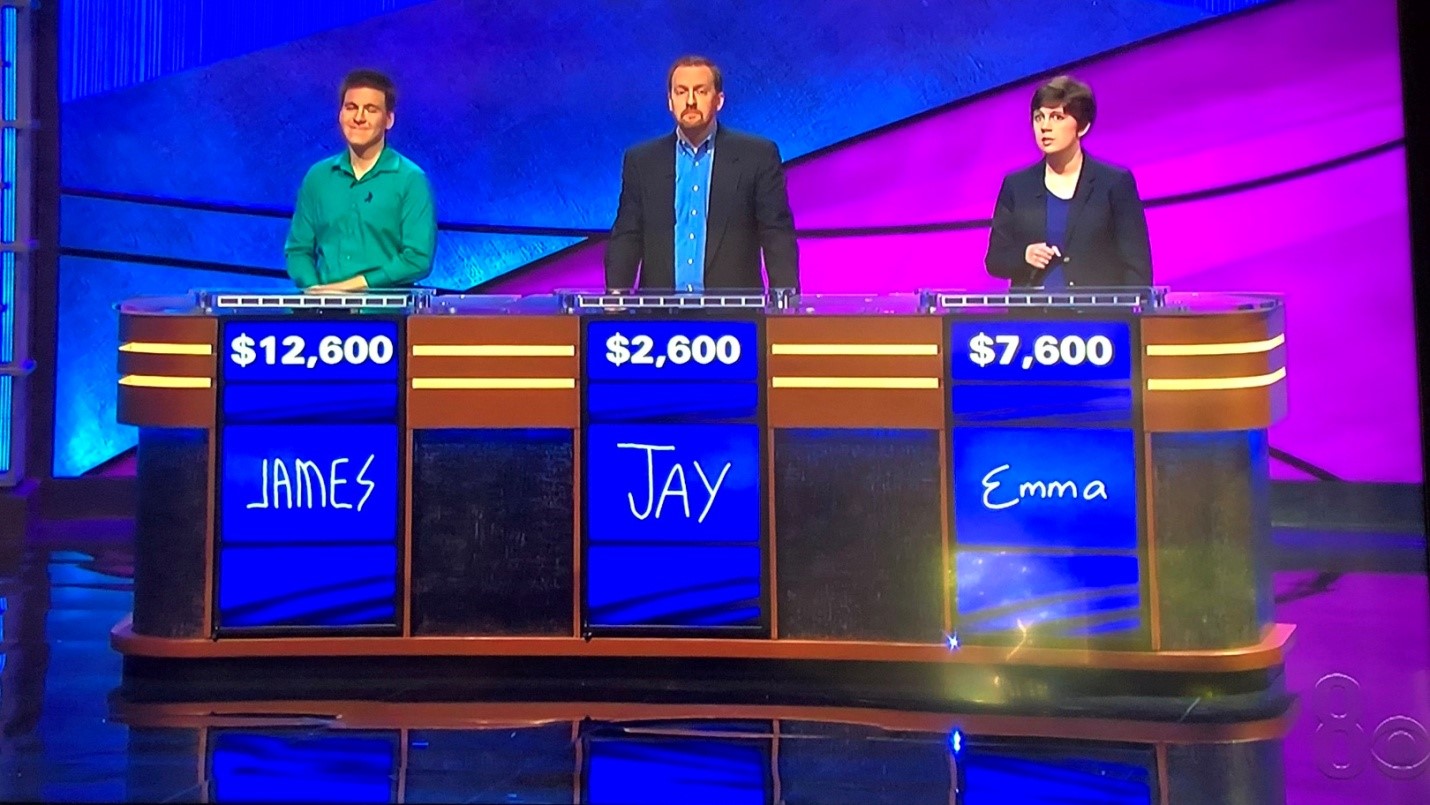 This picture shows the scores when Emma found the second Daily Double, in which she correctly went "all in," as James liked to put it when often did.

In the end, here were the scores going into Final Jeopardy:


In this kind of situation where the second place player has more than half the first place player, the leader typically bets enough to lock in a win if he/she is correct. This wager is 2*x + 1 - y, where:

Let me pause here. My forum is ablaze with claims that James made a terrible low wager. Some go onto say he took a dive so that Ken Jennings could remain the Jeopardy money-winning champion. Why would he do that, you may ask? As the conspiracy theory goes, the producers already have Ken Jennings as their first choice to replace Alex Trebek, with a sense of urgency to pick someone in the face of Alex's pancreatic cancer. The believers in this theory claim James must have been paid off enough to motivate him to lose deliberately.

Let me state unequivocally that I believe this theory to be a flaming bag of dog poop. James played that game exactly as he should have. He lost because of a combination of these reasons:


His low wager was exactly what he should have bet. It was easy to predict that Emma would wager high. His best shot was to go low and hope she got it wrong. If he bet big he would have had to count on both Emma being wrong and himself being right. Historically speaking, when the first place player is wrong, the second place player is also wrong 61% of the time (going back four seasons).

The following table shows under what conditions Emma would win according to both her score and James. This shows that if James predicated Emma would bet big, his best chance is to be in the red zone, where he needs for her to be wrong only, as opposed to the blue, where he would also have to be right.

I plan to write an article going over this more carefully. For now, I just want to absolutely say that James low wager was not only correct, but also the right amount to claim second place if both Emma and James were correct, which is what happened. Second place wins $1,000 more than third.

In closing, I would like to congratulate Emma on beating Goliath and James on an outstanding run.