One of dreams is to be a contestant on Jeopardy. My chances of that are pretty slim. However, when I was invited by a contestant to join her on a taping, I was happy to accept. Last Monday the two of us and some other friends headed south to Culver City, California, for the taping the next day.

Let me state upfront that contestants and audience members are strictly sworn to secrecy on the details of the tapings. I feel at liberty to discuss generalities that are probably true of every taping, but I will not say anything specific about who appeared or who won.

The first step is getting to the studio in Culver City. Contestants had to arrive about three hours before the audience. After parking and waiting by the parking garage entrance, the Jeopardy audience was walked across the studio lot to the stage for Jeopardy. Some VIPs were ushered in glorified golf carts *hmph*! Then we were told we could take pictures in the lobby but were told in no uncertain terms to turn OFF cell phones and if we were caught using one they could be confiscated. All pictures I'm including were taken in the lobby or outside the studio. 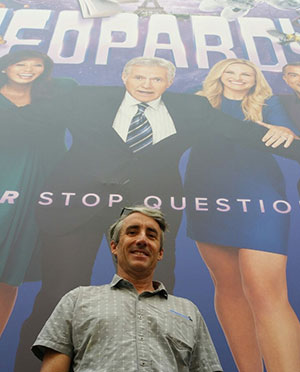 Outside the Jeopardy studio

Once the audience is seated they play some humorous footage from the show, interviews of past contestants, and parodies of Jeopardy. One clip they showed was from this show where nobody even attempted any question on football. After that, Jeopardy Jimmy, who is seen giving the $1,000 clue in the clip I just linked to, came out and went over the rules, what to expect, answered questions, and gave away some prizes. He was very good at it and I think could host his own game show. During this time, one can see the contestants at the podiums with staff members getting them ready.

Then Jeopardy Sarah introduces the contestants. Normally this is done by Johnny Gilbert, but we were told he records the introductions later and they dub them in. Then Alex comes out and it pretty much goes as seen on the show.

The contestants and audience members can see long vertical white lights along the board of clues that come on when it is fair to ring in. The audience can also see that the contestants stand on podiums, which are adjustable, so they all appear roughly the same height. Also seen by the audience is Alex has a big pad of notes, which he evidently reads the clues from.

During the "commercial breaks," Alex approaches the audience, greets them, may explain some things that had just happened, and takes questions. He is very engaging, witty, and spontaneous. For example, one audience member asked him, "Of all the places in the world you've been, which are your favorite?" Alex responded by saying that three words in the question were unnecessary, "in the world." However, after joking about excluding his travels outside the world, he listed a few. The only one I can recall is Antarctica.

These breaks lasted much longer than the time for commercials on the show. During this time you can also see staff members talking with the contestants, but I don't know much about what they say. I'm told they give advice on managing the ringer if a contestant seems to be struggling with the timing. They also use this to break to rerecord some clues if Alex mispronounces anything, which he often does, I'd estimate about twice a game.

The only thing to deviate from this routine, was once Alex flubbed a clue very badly, a contestant still answered it (I'm not sure correctly or not), but somebody halted the show over it. After some discussion, they scrapped that clue, replaced it with another one (which they keep on hand), and resumed the show.

The day I was there, I attended three games. They do five in a day, three in the morning, break for an hour lunch, and then two more. Between the shows, Jeopardy Jimmy kept the audience engaged with answering more questions and giving away prizes. Some of the prizes were based on Jeopardy trivia, like what is the maximum possible score ($566,400) and what was the winning score on the first episode of Jeopardy ($8,400). Audience members are allowed to leave between shows. The breaks last about 20 minutes. The breaks are a good time to take pictures in the lobby. 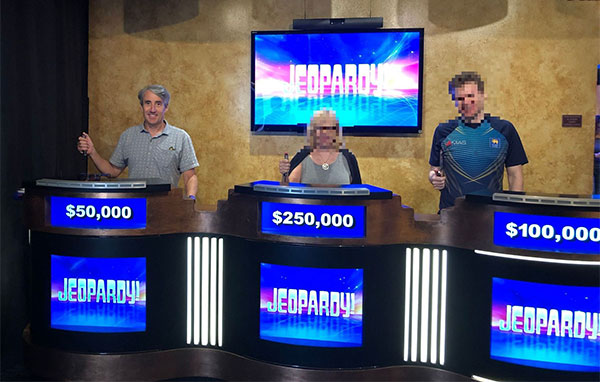 Piece from an old set in the lobby. Note who is in last.

Overall, it was a fun experience and something to cross off the bucket list. I wanted to stay for the two shows after lunch, but got outvoted by my group.

Next week I'll go over some recent rule changes and rules that have been around a long time that I didn't know about.