Deck Completed with the 52 Peak Club

Forgive me if I take a break from my series on the High Sierra Trail. We will probably resume with part three next week.

Not long after moving to Las Vegas in 2001, I got involved in the local hiking clubs. I was primarily active with the Las Vegas Mountaineers Club, of which I am still a proud member. However, I sometimes cheated on them and hiked with other clubs. One such club was the 52 Peak Club. They had more of an emphasis on climbing than hiking, which was fine with me.

In 2011, leader Branch Whitney had the idea to award a custom-made card for each peak climbed. The first such carded hike was Fortification Hill on January 8, 2011. I’m proud to say I was on that hike, although I didn’t appreciate the card concept at the time. I remember that hike because part of it was steep and rocky. Somebody knocked loose a bowling ball size bounder on a difficult section which grazed another climber below. There was some blood involved, but the woman who was hit bravely completed the hike. 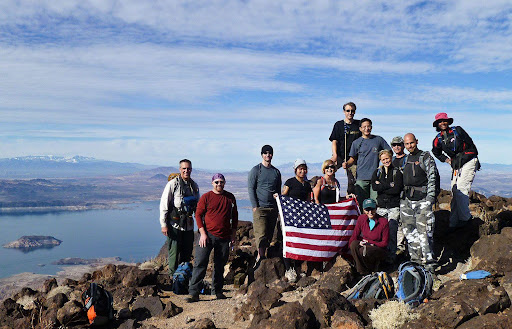 After that hike I did two more with the 52 Peak Club. Then I stopped. It was so long ago that I don’t remember why. I’ve been through other phases through my Vegas years, including running, road biking, mountain biking, unicycling, fitness boot camps, and simple laziness.

Skip ahead nine years and two friends of mine joined the club and proudly spoke and wrote about each new card earned. This tempted me to get back into it, which I did. Early in 2021, out of nowhere, I signed up for Global Peak. That hike was fun and challenging, so I signed up for more. I admit the external validation of the cards helped to motivate me. It’s also nice to have a specific goal to shoot for, which in this case is completing the 52-card deck. When that happens, you also get a joker, for 53 total cards, and are known as a 53’er. 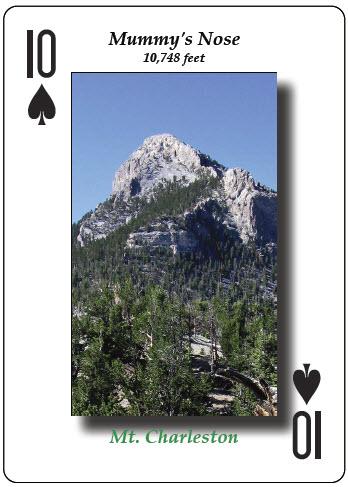 Along the way, I asked to be a leader in the club, which was approved. I lead four hikes since then and given rappelling lessons many times.

Twelve of the club hikes are held on and around Mount Charleston. Due to snow and ice most of the year, these hikes are done May to September only, most of the time. In the summer 2021, I completed only ten of these 12 cards, so would have to wait until summer 2022 to complete my deck.

Fast forward to April 2022 and I had only three cards left to go. One difficult one in Red Rock, Ice Box Peak, and two near Mount Charleson, McFarland Peak and Mummy’s Nose. I was not familiar with the route on any of them, so needed another leader to help me with them. Fortunately, a very kind leader by the name of Ash, lead all three of my last hikes.

The last one was Mummy’s Nose, which I did last Saturday, on July 2, 2022. There is usually a celebration on said last hikes, in which the one completing his deck gets a plaque. There was no exception in my case. 14 others joined me in celebrating my achievement at the summit. I returned the favor with a trivia challenge and magic trick. 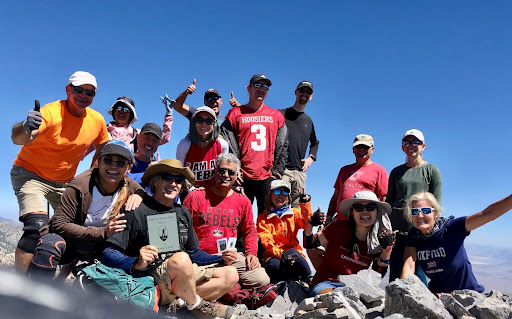 In closing, I have had 52 great adventures with the 52 Peak Club. Many of their peaks are technically advanced, necessitating ropes. Others have cliffs and ledges, inches from falling to your death. Overcoming those fears and challenges I think has made me a better person. Along the way, I’ve made friends with many smart and strong people. I would like to thank Branch, Ash, and all the leaders who helped me with this accomplishment. It was so much fun that I’m already working towards a second deck.