For today's newsletter I will be reviewing the Magic of Jen Kramer show.

Let's start with the basics. The show plays at the Westgate (formerly the LVH, before that the Las Vegas Hilton, and before that the International) at 5:00 on Wednesdays through Saturdays. Before ridiculous fees get added on, tickets start at $25. To give you an idea of the fees, I looked at a $33 ticket. After clicking "buy," fees had increased the price by 57% to $51.86. However, this show seems to show up as an option as Half Price Tickets so consider that option. There are VIP tickets available, closer to the stage and at tables, for a little more. The showroom is small so even the worst of seats are not very away from the stage.

Jen Kramer herself is the cutest entertainer I have ever seen on the Las Vegas strip. She is also a graduate of Yale so makes the perfect combination of brains and beauty. If you want to get a preview, there are plenty of YouTube videos of Jen, including a TED talk she gave an Yale on the "Real secret of Magic."

Her show is very engaging of the audience. Most tricks involve the audience, so be prepared to participate. Like any great magician, she makes everything look easy. Most magic tricks are pretty easy in theory, but very difficult to do well. As an amateur magician myself, most of the tricks I had seen before. However, it didn't bother me. Jen had me with her smile. Her presentation was about the best I have ever seen.

Not surprisingly, my favorite trick was probably the one with a Rubik's Cube. She invited an audience member to scramble up a Rubik's cube, while she did the same behind her back. Then she compared them and they were exactly the same. I won't reveal the secret, but combing magic with the Rubik's Cube is paradise for geeks like me.

After the show, Jen greets any member of the audience who wishes and poses for pictures. Here is one with my group. We had a nice chat about a charity she support Magicians without Borders. 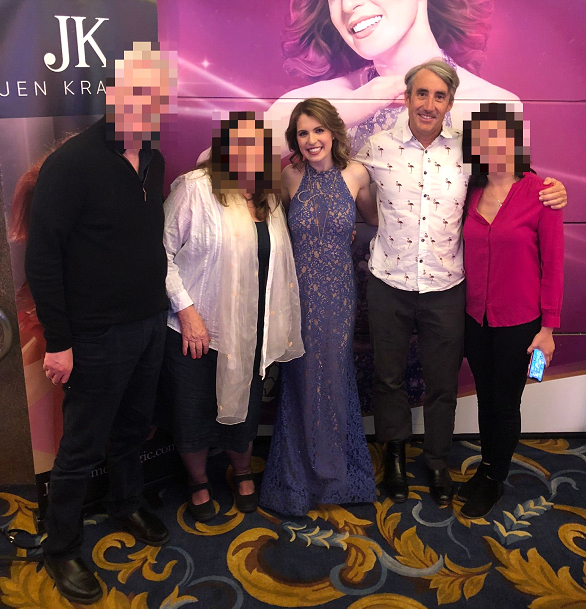 In conclusion, the Magic of Jen Kramer is not only a great show but a great value as well. For a show at this price point, I don't think you could do any better.