I'm getting asked left and right if I know James Holzhauer. If you don't recognize the name, he has won the last 12 straight games on Jeopardy, as of the time of this writing in the morning of April 22. Many people have won at least 12 consecutive games, but James has been averaging a win of $71,000 per episode. The average among all winners is about $20,000. He holds the record for a single day with at $110,914 and many other places on the top ten list.

The man is no slouch when it comes to trivia. He destroys the board up and down, right and left. There is no category he seems to fear. You probably could have said that about the current longevity champion Ken Jennings, but why is James winning so much more money per game than Ken or anybody else? you might ask. 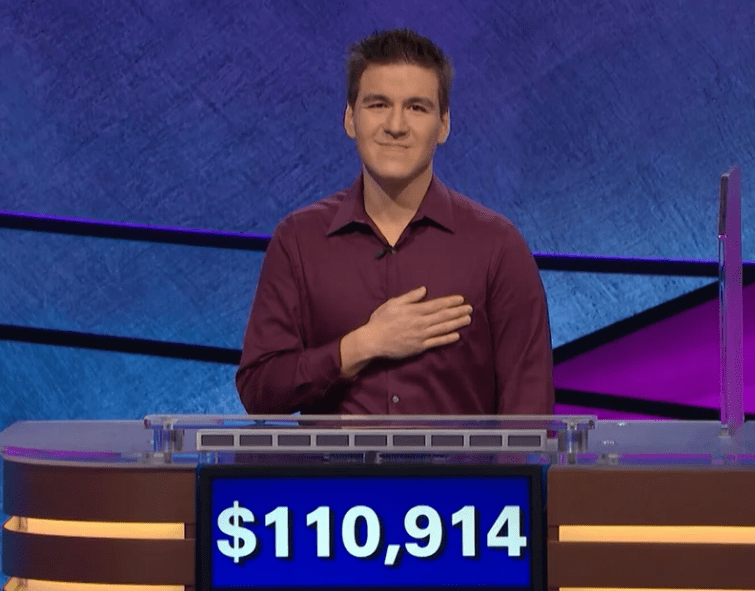 The answer could be summed in one word - aggressiveness. James is a professional gambler from Las Vegas. He obviously knows a thing or two about strategy and making big bets when the odds are in your favor. He doesn't just want to win each game, but to walk away with as much money as possible in the process. His primary trick is the Daily Double.

If you don't know what a Daily Double is, it the opportunity to make a bet, up to your current score, on a single question you have to yourself. 90% of the time Daily Doubles are found in the bottom three rows. Source: flowingdata.com.

Most players are rather timid with these, but James usually goes all in, especially early in the game. I figure James knows the answer to 80% to 90% of the questions, so getting even money is a great value. The only exception is sometimes late in the game he will bet about the maximum he can to ensure a likely win.

The April 19 show is a good example. Late in the game he found the last Daily Double. Here were the scores at the time:


There was only $4,000 left on the board over five questions. In an absolute worst-case scenario, Gabby could have got all of them right, increasing her score to $6,800. In Final Jeopardy she could have doubled that up to $13,600. If James went into Final Jeopardy with twice that, plus $1, or $13,601, he could have ensured winning and returning the next day. So, the maximum safe wager would have been $28,400 - $13,601 = $14,799. James' wager was $15,000. The odds of absolutely everything going wrong and losing with a $15,000 wager are extremely remote, so I don't fault him for going a little over the $14,799. Most players in his situation would incorrectly have bet very little, not needing to gamble to lock in a win. With just a few seconds to do that math is, to quote that baby on the Little Rascals, is "remarkable."

To answer the question posed at the beginning, no, I'm afraid I don't know James. He is also a climber, as evidenced by his story of needing a helicopter rescue in Death Valley, so how we've never crossed paths, I'm not sure. I think I'm two degrees of separation from him through at least a few people.

To discuss his current run on Jeopardy, there is a lively thread at Wizard of Vegas about it.

In other Jeopardy news, I crashed and burned in the online Jeopardy test on April 9. I don't even want to talk about that.