Aloha! I just returned from a week on the Hawaiian island of Kauai. This is my fifth time to Hawaii, but my first to the Garden Island. Compared to Oahu, Maui, and the Big Island, I found Kauai to be more rustic and original, compared to the surfeit of tourists and the accompanying commercialism on the other major islands.

I traveled with four family members, including two over the age of 80, so any big adventures were out of the question. We stayed at the south-west side of Kauai in a nice Air B&B in the small town of Kekaha. It was a quiet location near the longest sandy beach anywhere in Hawaii. We were almost at the end of the road that goes along most of the coast of Kauai. While we had the benefit of staying in a quiet part of the island few tourists see, the downside is we were far from anything on the east or north side of the island. In fact, we never made it very far from the town of Waimea, so this newsletter is restricted to places in southwest Kauai.

Following are some pictures of me from my trip. I also made a short YouTube video of it, which you may enjoy at https://youtu.be/zYMMkoifCzA. 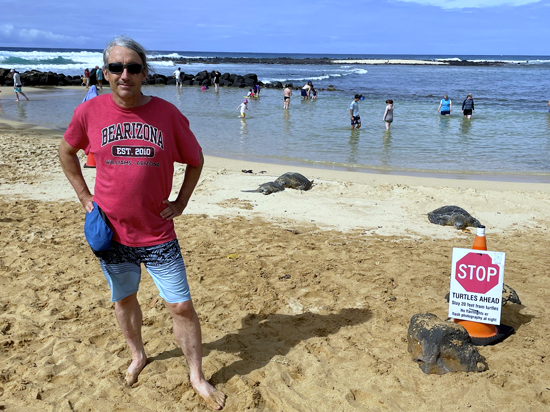 The picture above was taken at the Poipu Beach. Notice the three sea turtles relaxing on the smooth patch of sand behind me. Behind me you see a lot of people standing in the water. You didn’t even need to snorkel to see fish, one could just stand and look at them from there, although the viewing got better a little deeper, where the bottom got rocky and one needed to swim. Overall, this was a nice family-friendly beach, but it was located in the touristy area of Poipu and thus was rather crowded. The snorkeling was pretty good. Fish were there, but the bottom was shallow and rocky and the waves rather big. Lifeguards were often barking at swimmers over a megaphone to not swim out too far. 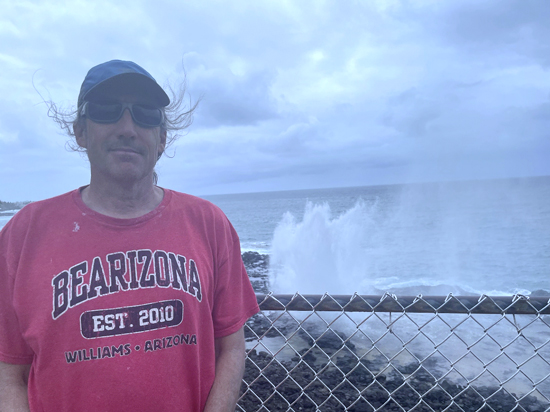 Near the Poipu Beach is the Spouting Horn, seen behind me. This is an underwater cave with an entrance underwater and another on top. When I wave comes in, water is pushed through the cave and it is forced out through the spout, spraying water in the air. I have a video clip of the Spouting Horn in my Kauai video, starting at the 0:51 point. 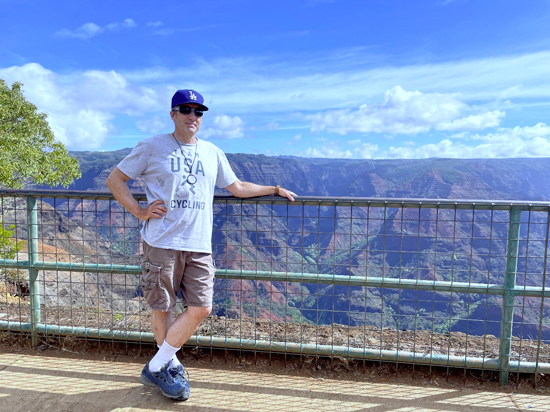 This is Waimea Canyon, the “Grand Canyon of Hawaii.” Someday, before I get too old, I hope to hike down to the bottom. 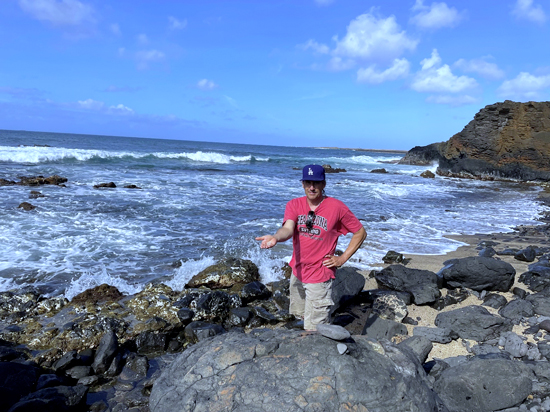 This is Glass Beach, where polished pieces of glass from a nearby cemetery, where people are known to leave glass vases and bottles, are known to wash up. I didn’t find much glass there, probably because of tourists collecting them. 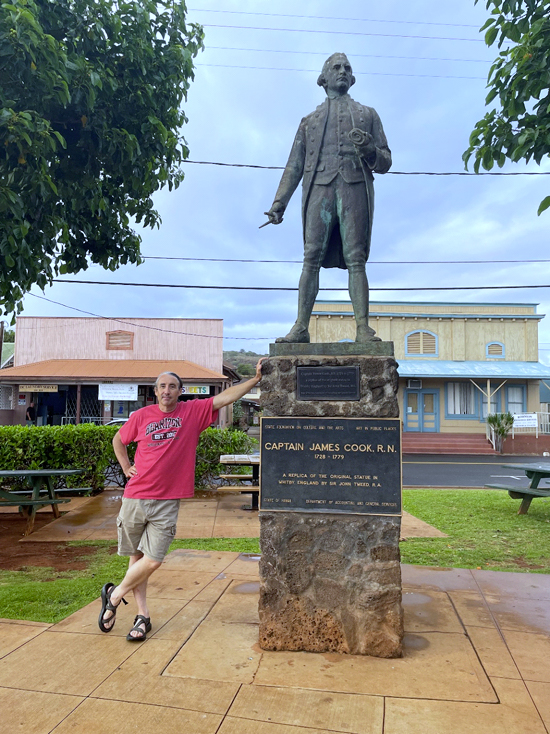 This statue marks where Captain Cook first landed in Hawaii, in Waimea, about two miles from where I stayed. Hawaiians do not put much emphasis on Captain Cook. Who can blame them? Life was never the same for them after he discovered Hawaii. I have also been to the spot where he was killed on the Big Island. 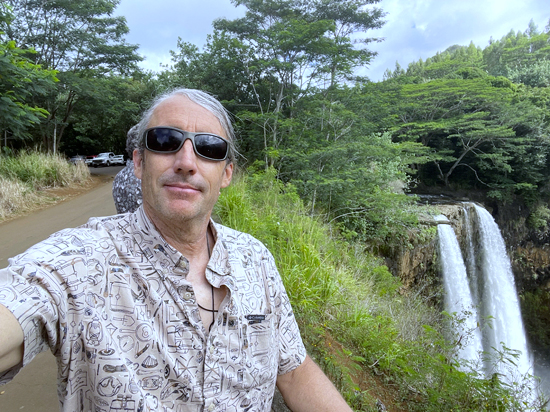 If you’re my age, you may recognize Wailea Falls behind me from the opening credits of Fantasy Island. I also have a video clip of Wailea Falls in my video mentioned at the opening of this newsletter. 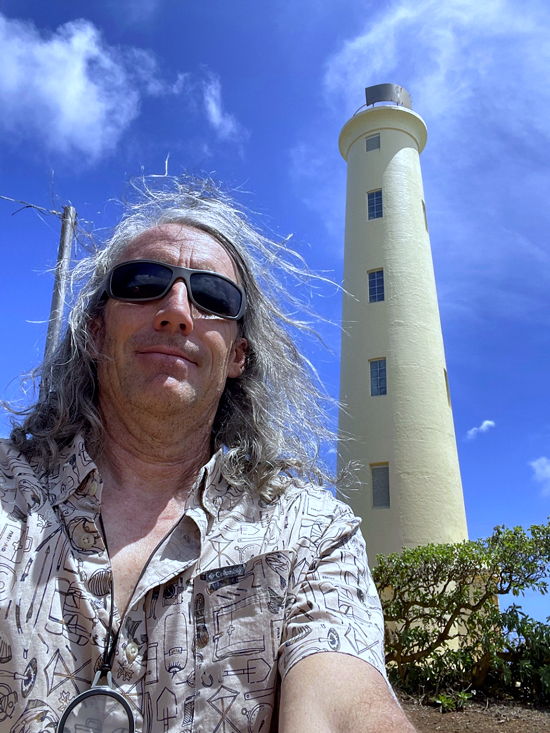 This is the Ninini Point Lighthouse, right by the airport. There are liberal coastal access laws in Hawaii, so one is allowed to drive through a private fancy golf course to get to this lighthouse, but there is almost no signage for it. 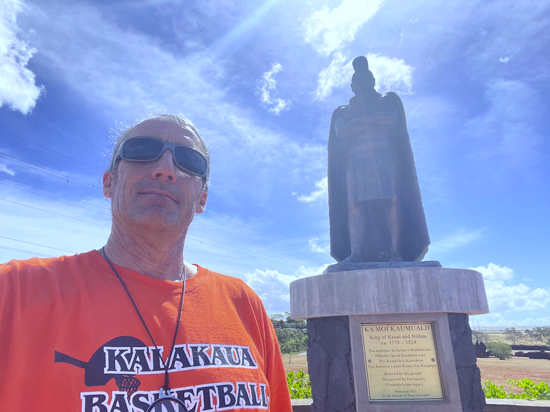 This is the King Kaumuali’I, the last king of Kauai. Yes, I know the lighting is terrible in the picture. Did you know that Kauai was never conquered by King Kamehameha? They did agree to a peace treaty, perhaps under threat of war, but Kauai still maintained much autonomy under the reign of Kamehameha. This spirit seems to remain today, where Kauai seems very independent, as opposed to a part of the whole state of Hawaii. This statue is also located in Waimea, where the king of Kauai lived part of the year. 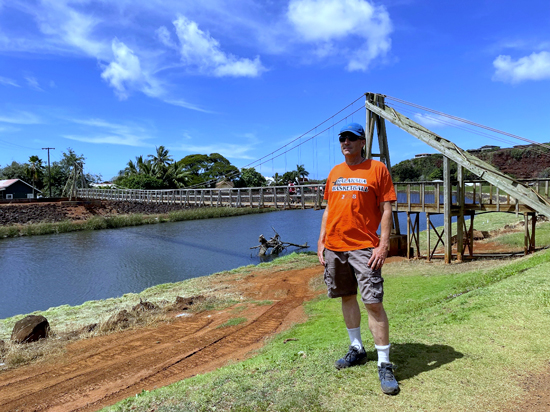 This is the Swinging Bridge, located in Hanapepe, a relaxed small town that is well worth a visit if you’re passing by. 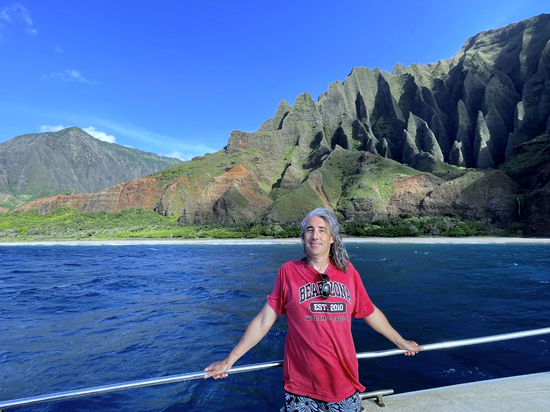 Finally, here is a picture on a boat overlooking the Napali Coast. It is possible to hike much of this coastline, with the proper permit. I had to settle on a boat trip, which was still outstanding.

Having seen only the southern part of Kauai and being restricted to activities my mother and mother-in-law could do, I am very eager to return to do some big adventures on Kauai. At the top of my list will be backpacking the Napali Coast and hiking to the bottom of Waimea Canyon. At the age of 56, I need to do such things soon, before I get too old. Anyone want to join me?

In closing, I highly recommend Kauai, even compared to the rest of Hawaii. This is especially true if you enjoy the natural beauty of Hawaii and are willing to sacrifice the amusement park feel of Maui, Oahu, and the Kona side of the Big Island. Mahalo!