I hope you all had a good Chinese New Year and Groundhog Day. Let me preface this newsletter to say that I don’t consider myself a sports handicapper and never did. I strongly believe there are easier ways to beat sports. That said, the Super Bowl attracts a greater percentage of square money than regular season games. For this reason, I think the lines are often a little off on the Super Bowl. 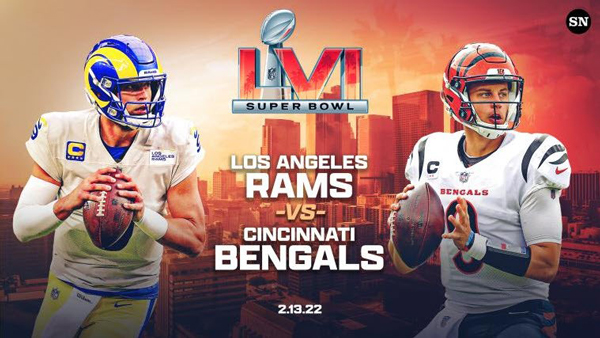 If I must handicap, my technique is simple. I estimate the points scored by each team as:

Yes, the total points scored are the same for both teams. Points allowed are within four. Dividing these totals by the 17 regular season games played by each team, we get the following averages.

Taking the difference, I estimate the Rams will win by 0.12 points. In other words, the two teams are very evenly matched.

“What about the Ram’s home field advantage?”, you might say. I pupu that. I believe the reason for home field advantage is mostly referee bias in favor of the home team, in every sport. I’m sure any referee will vehemently deny this. However, at the end of the day, professional sports is a business and money talks. Stadiums are majority filled with home team fans who ultimately pay the referees salary and prefer to leave a game happy. If you don’t believe me, the book Scorecasting by Tobias Moskowitz and L. Ron Wertheim is largely about proving statistically this to be true.

Being from the Los Angeles area, I can say with some confidence that LA has lukewarm, at best, football fans. Especially for the disloyal Rams, who left LA in 1995 for Saint Louis. When the prodigal sons returned in 2016, nobody slaughtered the fatted calf for them. Furthermore, their uniforms are ugly.

I predict the stadium will be split about 50/50 with fans for both teams and the referees will know this is a game with a national audience and will be emotionally indifferent to who wins. That said, I won’t say the home field advantage is worthless in this case. At best, I’ll allow one point the Rams way for it.

Thus, I think Bengals +4 is a good bet! Those who disagree will have all kinds of explanations why the Bengals suck and don’t deserve to be there and about the Rams iron wall of defense. However, numbers don’t lie. As I just showed, they show both teams to be almost the same both offensively and defensively.

What about the over/under? Adding the expected points scored by both teams, I estimate 49.06 total points scored. The over/under line of 49 to 50 is spot on. Thus, I take no position on that.

I’d like to repeat the disclaimer at the beginning that I am not a handicapper and I, of course, make no promises. So don’t put too much stock in my advice. As with any recreational betting, bet mainly for the purposes of entertainment.

Next week, I plan to look at some proposition bets. Until then, may the odds be ever in your favor.