Win Three Cards is a card game offered by Asia Gaming, a studio of live dealers for Internet casinos. If forced to compare it to other games, it has elements of both baccarat and Three Card Poker. Read onto the rules for more information.

The following rules are my best understanding according to some very poorly written rules at Asia Gaming.

The following table shows my analysis of the Dragon and Phoenix bets. The lower right cell shows a house edge of 2.50%.

The following table shows my analysis of all the side bets. The lower right cell shows a house edge of 2.50%. The right column shows the house edge on the side bets range from 9.13% to 56.40% (ouch!). 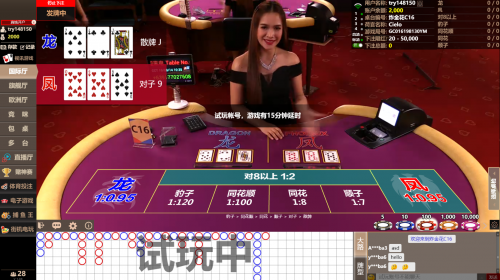