War of Elements is a glorified version of Casino War. One deck of cards is used. The player can bet on the winning side as well as a host of side bets. The odds are dynamically updated as the dealer goes through the shoe.

The game is offered by TvBet, a provider of live dealers for Internet casinos. It appears to be much the same as War of Bets by Betgames.

The strange thing about War of Elements is that it offers almost true odds. They seem to calculate the true odds, based on the deck composition, and then offer those odds rounded down. The number of decimal places the odds pay vary. On average, the house edge is 0.1% to 0.5%.

This is in contrast to the odds posted in the help file, based on the odds off the top of a fresh deck, that suggest a return of 90%.

The game is dealt with one 52-card deck by a live dealer. A single card will be dealt to both the Player and Dealer, the Player first. In addition to betting on the winning side or a tie, there are a host of proposition bets, as shown in the following list of ways to bet.

Contrary to what the Help file says, the game offers almost fair odds. They seem to calculate what fair odds should be, round that down to one to three decimal places and offer that to the player. This results in a very low house edge, averaging about 0.4%.

As an example, consider the following odds offered on the suit of either side in mid-deck. 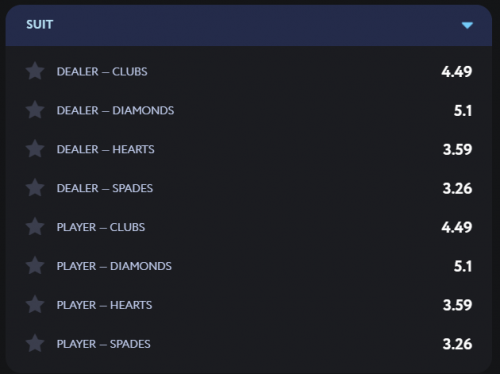 At time of this screenshot, there were 8 clubs, 7 diamonds, 10 hearts, and 11 spades left in the deck. The following table shows my analysis of each bet.

War of Bets — Bets on Next Suit

Watch War of Bets for free at TvBet.tv.