Twisted 21 is a blackjack variant that started a field trial at the Rio in Las Vegas on July 7, 2019. Briefly, each player starts with two cards face up and three face down. If the player wants to hit or double down, he chooses which down card to add to his hand. A poker-based side bet is also available based on the poker value of all five cards.

The game is based on conventional blackjack rules, which I assume the reader is familiar with. The following are changes made to it, as offered at the Rio.

I wish to emphasize that there is much argument at the game table about what the rules are. Below are my understanding of them, at least as how the game was played on August 8 and 9. I'll address some different interpretations later.

If these rules were unclear, here is a picture of both sides of the rule card. 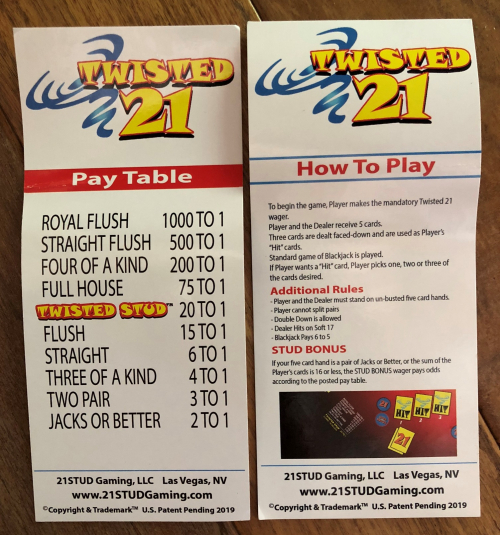 As mentioned above, every dealer seems to deal the game under different rules. The base game is quite clear but the rack card is very unclear about the Stud Bonus rules and each supervisor seems to have his own interpretation of them. Here are the main points of confusion:

Following is the return table for the Twisted Stud side bet. Hands are listed in rank order, not pay order. The lower right cell shows a house edge of 2.49%.

Discussion about Twisted 21 in my forum at Wizard of Vegas.