Super Bowl Squares generally refers to gambling on the terminal digit of the total points of each team in the Super Bowl. It can be done at the end of the game only or quarter by quarter. It is generally done among friends, with nobody raking the pot, where everybody has an equal chance.

For Super Bowl 54, the Circa Sports Books in Las Vegas (found at the D and Golden Gate) offered 400 bets where the player got to choose his own squares. This page primarily looks at probability of all 400 bets winning and the value of each bet.

I imagine most people finding this page may be more interested in how to conduct what I will call the randomized version of Super Bowl Squares. This is usually done among friends, where nobody rakes the pot. It is a fun way for people to gambling on the Super Bowl who have no idea what to bet on and/or don't care who wins. Following is the way that is generally done. 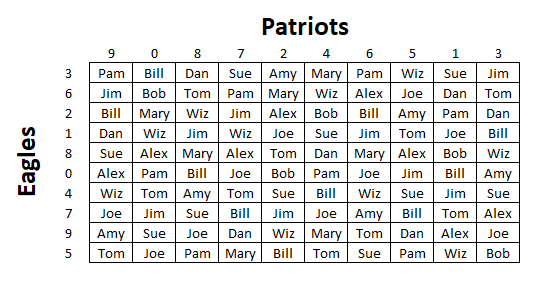 Let's look at an example, based on the 2018 Super Bowl. Here was the box score.

Per the distribution arrangement, Joe, Alex, and Tom would each get $200 and Bill $400.

Pick Your Own Square

The Circa sports book, which can be found at the D and Golden Gate in Las Vegas, offered bets on non-randomized Super Bowl squares. In other words, the player got to choose the terminal digit of both teams. They offered these bets for the first three quarters and the full game, so 400 total bets.

To analyze them, I looked at every NFL game from the 2000 to 2014 seasons, which consisted of 3,985 games. The following four tables show the distribution of the terminal digit of each team for each game. I counted each game twice, flipping the scores, for purposes of a larger sample size and gaining symmetry.

The following four tables show the probability of each square winning, based on the data above.

The tables above show that the count of some squares is zero, especially for the first quarter. However, the probability of a future game falling in that square is clearly greater than zero. To estimate the probability in such situations, I looked at just the terminal digit for each team for each game by quarter, without considering its correlation to the opposing teams digit. The following table shows the summary.

Following is the same information in probability form.

The following tables show the return of all 400 bets available. It is based on the direct count of all combinations 10 by 10 combinations of terminal digits in the data available when such count is greater than 0. When it is 0, I used the single-team probabilities.

This page is based on NFL averages only. There is no such thing as an "average game." For example, the over/under on the 2020 Super Bowl is 54, which is much higher than the NFL average. If this game is this high-scoring, then other quarterly totals, and thus terminal digits, are likely to be hit.

It should also be noted that the NFL in general has been a higher scoring game since the close of the data used in 2014, probably due to new rules curbing aggressive and possibly dangerous defenses.

I would like to add that if you made every bet in proportion to what it would pay on a win, thus making yourself indifferent to what happened because every winning ticket would be worth the same, then the overall return would be 60%, or a 40% house edge.

All that said, please take the returns posted here with a grain of salt.