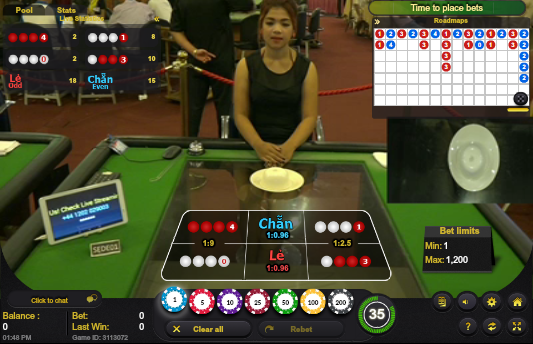 Shake the Plate, or Xoc Dia, is a mostly illegal Vietnamese gambling game. It is played with four chips, each red on one side and white on the other. The chips are put on a plate and covered with a bowl. After players make bets on the outcome, the dealer will shake the plate/bowl combo, lift up the bowl, and pay winners. Bets are available on the number of chips that will land red face up.

I noticed this game at an Internet casino offering live dealer games. One of them was this game, although they title it "sede," for reasons I have no idea. It is my understanding that the Vietnamese name Xoc Dia translates to "shake the plate," which sounds better so I'm titling it that.

Here are the rules to Shake the Plate.


Following are the bets available. The pays are those used at a live dealer Internet casino by Evolution Gaming and Asia Live Tech (ALT). Pays are on a "to one" basis, meaning you get your original bet back if you win. I imagine that payouts may vary if you play elsewhere.

The following table shows the probability of winning and house edge according to the pays by Evolution Gaming. Pays are on a "to one" basis.

I imagine in the streets of Vietnam the pay table in this game may vary. The following tables show the house edge according to various pays on the three types of bets.

Zero Reds and All Reds

One Red and Three Reds

Even Reds and Odd Reds

Following are the pays and return offered on each bet by Asia Live Tech (a live dealer studio for Internet casinos).

Like all games of pure luck, the only strategy is in bet selection. With the lowest house advantage on even and odd, I would strongly suggest betting those only, at least under the Evolution Gaming pay table.

Discussion of Shake the Plate in my forum at Wizard of Vegas.