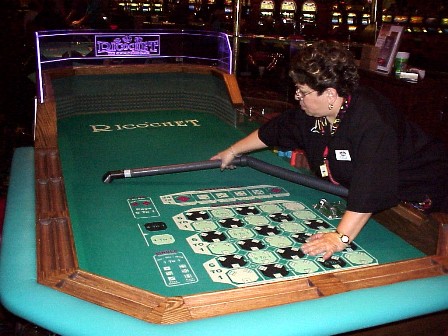 Ricochet is a dice game formerly found at the Fiesta Henderson. I hear it was removed in July 2006. The game uses three dice and is played on a small table with chairs. Many bets are available, some that resolve in one roll, and other may take several. I have had to make up some terminology to explain this game, which may not be consistent with what the owners intended. 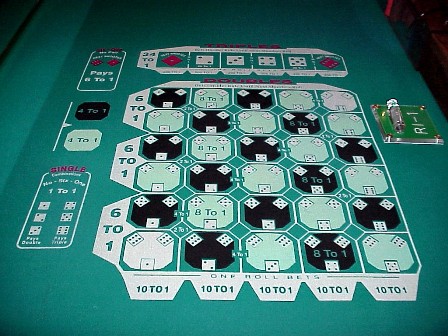 Most of the betting layout is all 30 cominations of a pair and a singleton. Players may bet that any chosen combination will be rolled before the player craps out (for lack of a better term) by throwing one of turn ending combinations listed above. As in roulette the player may straddle two or four bets as well. There are also single roll bets. The following list explains all the available bets.

The following bets win if the chosen bet wins before a player craps out (throws a roll ending combination).

The following bets are always resolved in one roll.

Finally is the field bet. It pays based on one roll as follows.

The following table shows the probability of winning and house edge for all bets except the field. As in craps, the house edge on place bets is defined as the expected loss per bet resolved.

The next table shows the possible outcomes of the field bet. The lower right cell shows a house edge of 2.78%.