Pontoon is sometimes said to be an early version of blackjack. Today Pontoon is offered by Real Time Gaming, Playtech, Microgaming, Betsoft, Galewind Software, Nucleus and Cryptologic Internet casinos. In Pontoon, any five-card hand or a pontoon (same thing as a blackjack) pay 2 to 1, including after splitting. However there is no dealer up card and the dealer wins on ties. There are several other rule changes from blackjack so read carefully before playing.

Following are the usual rules.

The following tables show the basic strategy for Pontoon under RTG, Playtech, Galewind, Betsoft and Cryptologic rules. Betsoft does not state the number of decks used, but they use six in all their standard blackjack games.

To use the strategy look up the player's hand along the left and across the number of cards along the top. The top of the strategy is for hard totals and the bottom for soft hands. The player should always split eights. The player should split aces under the liberal ace splitting rules above, but not under the Microgaming rules, or hypothetically if an ace and 10 after splitting aces was not a pontoon.

The next table shows the strategy under Microgaming rules.

The house edge is 0.38% under the default rules listed above. These rules are followed by Real Time Gaming, Playtech, Galewind Software, and Cryptologic.

At Microgaming casinos the rules are the same except split aces get one card each and the dealer stands on soft 17, in which case the house edge is 0.39%.

Following are some alternative rules and the effect on the house edge.

It is not a coincidence that both restrictions on split aces increase the house edge by the same amount, because if either rule is in effect the player should hit a soft 12. 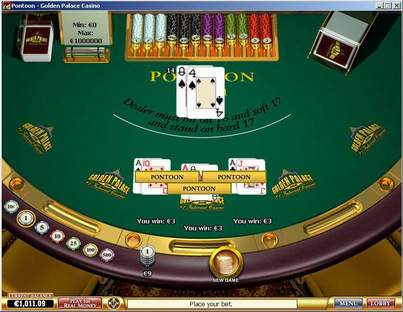 I would like to thank Microgaming and Yechezkel Zilber for their contributions to this analysis.