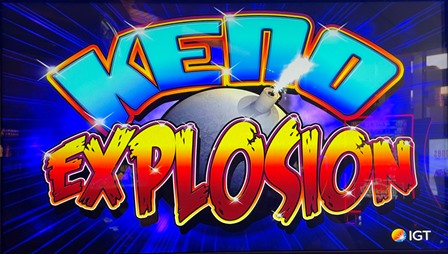 Keno Explosion is a keno variant by IGT. It entails placing bombs on three unchosen numbers by the player. If the ball draw matches the number of a bomb, it will explode and if a fragment of the explosion hits a number chosen by the player, it counts as a hit.

If these rules were unclear, here are screenshots of the rule screens. Click on either image for a larger version.

The following table shows an example pay table. Note that many pays end in 0.5. To keep the total pays in round numbers, the player must bet an even number of coins. 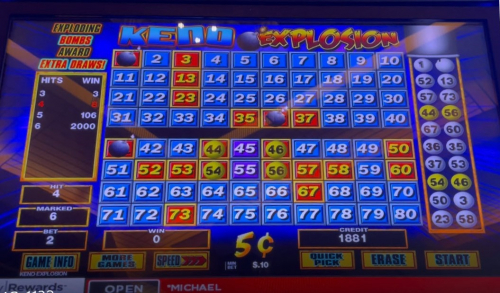 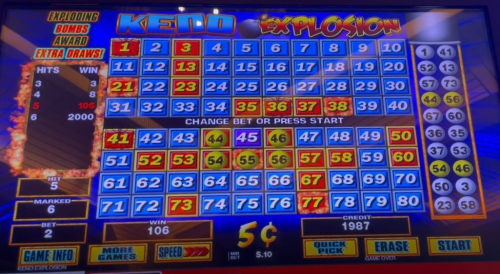 The image above was taken after the bombs exploded. Fragments of the bombs hit 21, 38, 55, and 77. You can tell because the background to these numbers are red and also look like they are on fire. Numbers previously occupied by a bomb, 1, 36, and 41 are shown to look broken. One of the fragments hit 55, which was one of the numbers I chose. This increased my number of catches from 4 to 5, which increased my win from 8 to 106.

Are Bombs Gaffed to Explode?

It should be noted the first rule screen says, "Explosions and fragments are evaluated after all numbers are drawn." While this is open to interpretation, it suggests to me everything that goes on with the bombs is determined independently and not necessarily by the random draw of balls.

I would like to emphasize that if this game is gaffed, it is gaffed in the player's favor. However, I claim gaffing in either direction is in violation of Nevada Revised Statute 14.040.5, which states, "For gaming devices that are representative of live gambling games, the mathematical probability of a symbol or other element appearing in a game outcome must be equal to the mathematical probability of that symbol or element occurring in the live gambling game."

A random simulation of this game, that assumed natural odds for all aspects, showed a return of 82.49%. As far as I know, IGT, the makers of the game, only allow settings as low as 85%. Other 5¢ keno games on the same machine at the Red Rock were set to an average return of 89.45%. This is further evidence the game is gaffed so the ball draw is more likely to hit bombs than a game that a natural ball draw, where every number was equally likely to be drawn.

In this video I present my evidence and argument for why Keno Explosion does not conform to the natural probabilities of live keno.