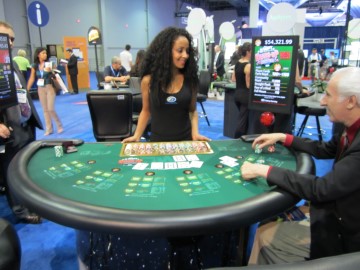 In November, 2022, I became aware of a similar game called Big Blind UTH. I will report more on that game after I get the Blind pay table.

Following are the rules for Heads Up Hold 'Em. For those used to the terminology in Ultimate Texas Hold 'Em, what is called the Blind there called the Odds bet here.

The player should make the 3X raise with any pair except deuces. Otherwise, use the following table shows when to make the large 3X raise.

The strategy for the medium and small raise are the same as in Ultimate Texas Hold 'Em, as follows:

The following table shows all possible outcomes of each hand, what it pays, the probability, and contribution to the return under the losing Odds bet pay table number 1 (the one that goes 500-50-10-8-5). The lower right cell shows a house edge of 2.36%.

By comparison, the element of risk in Ultimate Texas Hold 'Em is 0.53%.

The standard deviation, relative to to the Ante bet, is 4.56. 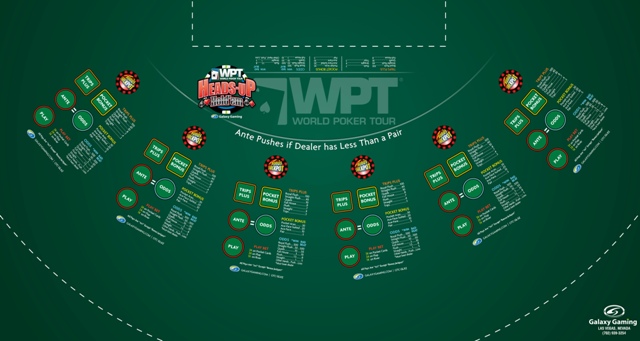 This is full table cloth.

The Trips Plus bet will pay according to the poker value of the player's hand regardless of the value of the dealer's hand. Following is an analysis of the most common pay table.

The next table shows four known pay tables for the Trips Plus.

The Pocket Bonus bet will pay according to the value of the player's two hole cards. The follow tables show what each two cards pays, the probability, and contribution to the total return for each known pay table for the Pocket Bonus.

I would like to thank Charles Mousseau and Stephen How for their assistance, which confirmed my analysis. Thanks to Charles also for his advice on the medium and small raise strategy.

Detailed calculations on some starting hands.

Play Heads Up Hold 'Em at the Galaxy Gaming web site. One click and you're playing.