Try to concentrate on the cards and not the Genie's lovely big eyes *ahem* in this Playtech game of card prediction. There are actually two different versions of the game with seemingly the same name to make things complicated. For lack of a better idea, I will call them the "classic" and "jackpot" versions, and explain them both separately. 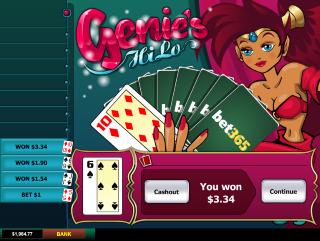 Here are the rules for the classic version of the game.

Let's look at an example. The player bets $1 and the first card is a red 5. Here is what the player would grow his balance to if he wins according to the various bet options. Remember to always round DOWN to the nearest penny.

Much like single-zero roulette, it doesn't make any difference what you bet on as the house edge is always the same. So play it safe or throw a Hail Mary, it is up to you. The only thing that matters a little bit is the rounding. You can save a fraction of a penny with the bets that will get rounded down less if you win. However, if you're the kind of player to worry about a fraction of a penny, like me, then you're probably not playing this game in the first place.

Don't bother trying to count the cards previously played, because the genie does that too and all the wins are based on the true odds according to the remaining cards in the deck at that time. 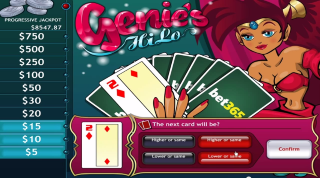 Following is the pay table for Genie's Hi Lo Jackpot. Wins shown are on a "for one" basis.

The strategy is pretty simple, as follows:

The following return table is based on a $5 original bet, the amount required to qualify for the full jackpot. The return column is the divided by $5, to the show the ratio of the expected return to the original wager.