It began a field trial on June 24, 2021, at the Hard Rock in Take Tahoe and I hear it has previously been seen in Washington state.

The following strategy can be found on the Fu Bacc rack card and was confirmed by Gordonnm888, as known at my Wizard of Vegas. 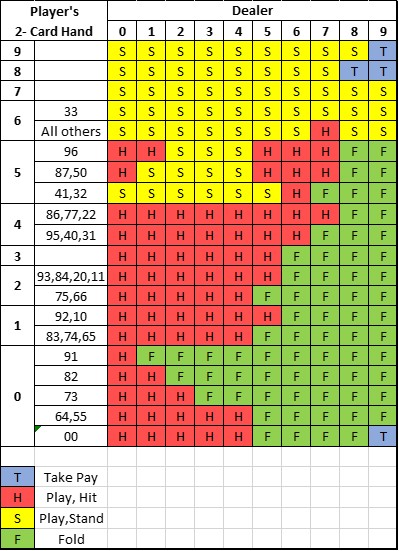 The following table shows my analysis of the Ante bet. The lower right cell shows a house edge of 3.05%.

Following this strategy will result in a house edge of 10.41%.

There are several composition-dependent exceptions to this strategy, which would lower the house edge to 10.30%. Since this figure is still significantly higher than the house edge of the Ante bet, I won't bother to list the Tie bet basic strategy exceptions.

The following table shows my analysis of the Lucky Monkey side bet. The lower right cell shows a house edge of 5.88%.

Usually I do all my own math, but this game is a rare exception. A discussion began about it in my Wizard of Vegas forum while I was on a two-week vacation. By the time I got home, there was a rock solid and confirmed analysis completed.

That said I would like to thank, in no particular order, CharliePatrick, Gordonm888, and ssho88 (as known at Wizard of Vegas) for their outstanding work analyzing this game. The only credit I can take is for the Lucky Monkey side bet, which was easy to analyze.