Frenzy Disks (16 Numbers) is a roulette variation by Red Rake Gaming. Two concentric wheels have 25 numbers and 8 balls each. Like keno, the object is to predict which numbers the balls will land in.

The following pay table is for the inner and outer wheels. Wins are based on the bet for that wheel (or half of the total bet).

The following multiplier table. The multiplier earned is based on the lesser number of matches of the two wheels. 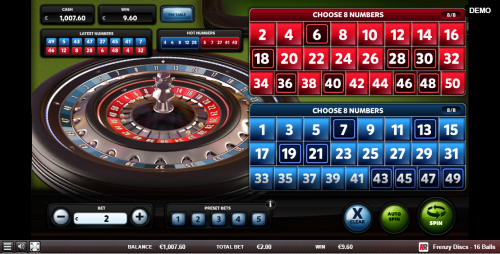 The following table shows the expected win per wheel. The lower right cell shows that the player can expect to win back 57.97% of his bet per wheel, before considering the multiplier.

One cannot simply multiply the expected win by the expected multiplier, because the win and the multiplier are correlated. To get at the overall return, one must consider all possible outcomes of the inner and outer wheels. To begin, the following table shows the probability of all possible number of matches of the inner and outer wheels, rounded to six decimal places. The number of Blue Matches is shown along the column headings.

Probability of Number of Matches of Both Wheels

The next table shows the total win of both wheels according to the number of matches on each. The column headings are the number of blue number matches.

Total Win of Both Wheels

The next table multiplies the previous two tables to get the overall return according to the number of matches from the two wheels. The lower right cell shows an overall return of the game of 96.07%.

Total Return of Both Wheels