Fortune Cup is a very nicely done horse racing game by Konami. It has many of the features of the beloved Derby game by Sigma. The excitement is the same, but the Komani brings the game up to modern standards.

Each race is run with eight horses. Up to eight players can place bets on betting screens. The following bets are available: 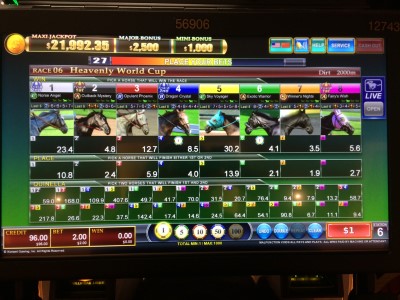 There are also three progressive jackpots to the game. As I understand it, sometimes, after betting closes, a horse will be picked at random. If that horse wins the race, then players will win one of the progressive jackpots. I have no idea how often it hits, average win amounts, or how much it contributes to the return of the game. I'm not sure if betting on the given horse is required, or if and how jackpots are shared among players.

This analysis was based on the units at the Venetian and Red Rock in Las Vegas. The way I analyze games like this, and futures bets in sports betting, is to assume the probability of any bet winning is inversely proportional to what it pays. In other words, every bet of a given type of bet has the same return or house edge. For Win and Quinella bet this is easily done as follows:

For place bets, I did the same thing except divide the sum from step two by two, because two horses place in each race.

That said, I took down all the bets for three races. Based on these three races, the average returns are as follows:

What I think is actually going on is the game is set to a target return of 84% at the Venetian and 82% at the Red Rock. However, with only eight horses and wanting to keep the wins to one decimal place, they missed those targets by up to 0.5% on any given race.

While any return in the low 80's is not a good bet, mathematically speaking, there is only one race about every two minutes, so it is a slow and fun way to play. On an hourly basis, the average expected loss per hour, assuming the same amount bet per play, would be much greater playing reeled slots or video keno than Derby.

Here is a typical race from the unit as the Venetian.