Home › games › Easy Over Under

Easy Over Under made its debut at the Red Wind Casino in Olympia, WA on May 2, 2011. It is a fairly simple dice game involving the shake of two dice and one playing card. There are four bets based on the relationship between the dice total and the card. 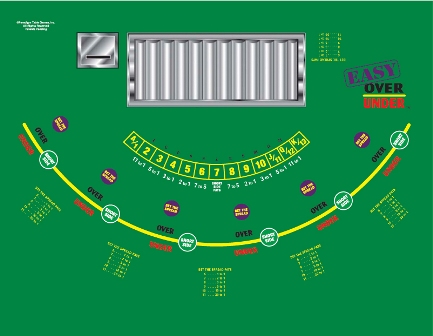 Play begins with the player making over, under, and/or "Bet the Spread" wagers. Then two dice are shaken and exposed. At this point, unless the roll was a seven, the player may make an additional wager called the "Short Side." Then a single card is dealt to each player. The value of the cards are as follows:

Note that the average dice roll and card value are both seven. Following are the specific rules of each bet.

The Over bet wins if the card value is greater than the roll of the dice. In the event of a tie, the player loses half. Except, a tie as the result of rolling doubles will push. Wins pay even money.

Same as the Over bet, except player wins if the card value is under the roll of the dice.

The Bet the Spread wager pays according to the point difference between the dice total and the card. Following is the pay table:

If the card value equals the roll of the dice the player will lose half, except if the dice are doubles a tie results in a push. This is the same rule as the Over and Under bets. The reason some ties lose half is to give the casino an advantage; otherwise, the odds would be exactly fair.

The Short Side wager is limited to the amount of the player's Over or Under wager.

The following table shows the probability and return for each outcome of the Over and Under bets. The lower right cell shows a house edge of 3.21%.

The following table shows the probability and return for each outcome of the Bet the Spread bet. The lower right cell shows a house edge of 2.99%.

easyoverunder.com, the official web site for the game.