Crazy 4 Poker is a poker variation invented by Roger Snow and is marketed by Shufflemaster. It has been around since about 2004 and one of the more successful poker-based casino games.

Optimal strategy would be tedious and complicated memorize. However, the player can get extremely close to it with this simple strategy. Follow the first rule to apply.

The next table shows the return of the Ante bet under optimal player strategy.

The next table shows the return of the Play bet under optimal player strategy. A win of 0 also includes folding, in which case a raise bet was never made.

The next table shows the return of the Super Bonus bet under optimal player strategy.

The next table shows the net overall win between the Ante, Play, and Super Bonus under optimal player strategy.

The bottom right cell of the table above shows a house edge of 3.42%. This is the ratio of the expected player loss to the Ante bet. One might argue that since the Super Bonus bet is required I define the house edge as the expected loss to the sum of the required starting bets. However, in the interests of consistency with how the term is defined in other games, I choose to base the house edge on the Ante only. So, for every $100 you bet on the Ante you can expect to lose $3.42 between the Ante, Raise, and Super Bonus combined.

The standard deviation is 3.13, based on the Ante bet.

As far as I know, there are four pay tables available for the Queens Up, according to the choice of casino management. Most Las Vegas casinos use pay table 4.

Some casinos add on a side bet known as the 6-Card Bonus. This side bet is found on multiple poker-derivative games, so I created a special page for it. For more information, please see my page on the 6-Card Bonus.

This is a $5 "red light" progressive side bet that pays $1,000,000 for a royal flush in spades, using the player's five cards. For all the rules and analysis, please see my page on the Millionaire Progressive.

Before you play for real money, practice your Crazy 4 Poker game right here. 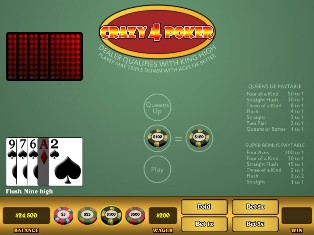 There is also a similar game called Four Card Poker.