Crash is a simple yet unique type of game. The player sets a winning goal and his probability of achieving it are inversly proportional. The result is displayed to the player as a rocket, increasing in altitude at an exponntial rate. That rocket will eventually explode. The player's aim is to bet on the rocket achieving an altitude equal to the winning goal.

The game can go by other names SmartSoft Gaming calls their version of this game JetX and DraftKings calls it DK Rocket.

The player may set his winning goal to whatever he wishes, up to about 1000x his bet. What happens visually is a space ship takes off at an altitude of 1. Every second, the spaceship either increase in altitude at an exponential rate or explode. The pilot will set a certain altitude to eject. If the pilot ejects at that altitude, before the spaceship explodes, then the player will win the product of his bet and the altitude the pilot ejected.

The following rules are based on the JetX game by SoftSwiss Gaming.

To make matters more confusing, the player may make one or two bets on different multipliers in the same game. If the player does this, then there will be two pilots in the spacecraft, ejecting at different altitudes as chosen by the player.

The player does not have to bet during the 5.6-second time between games, but may place his next bet during the current game and may also put the game on autoplay to keep repeating the same bets indefinitely. 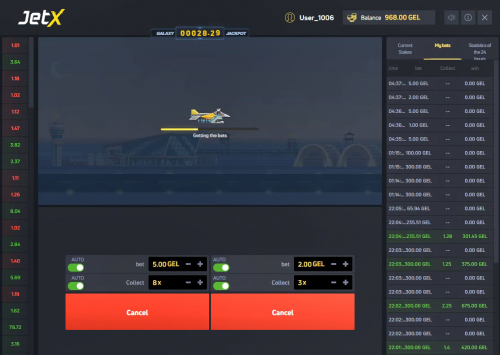 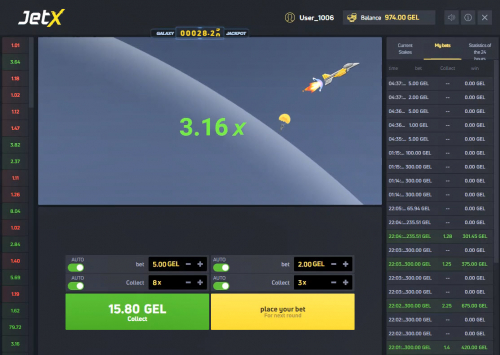 The second image above was taken a short time after the spaceship reached a multiplier of 3x. As soon as it passed 3x, the first pilot ejected, corresponding to the bet of 2 on a win of 3x. You can't actually see the ejection at first, which is why I waited until 3.16x so you could see the parachute. 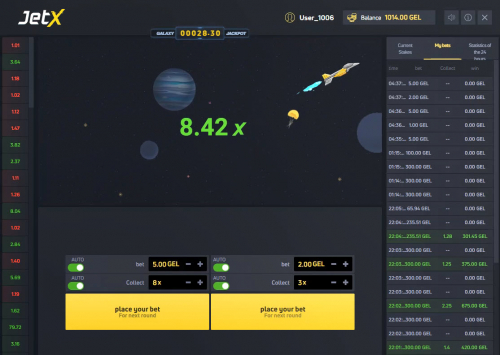 The third image above was taken a short time after the spaceship reached a multiplier of 8x. As soon as it passed 8x, the second pilot ejected, corresponding to the bet of 5 on a win of 8x. Again, I waited a few moments to take the screen capture, so you could see the parachute. 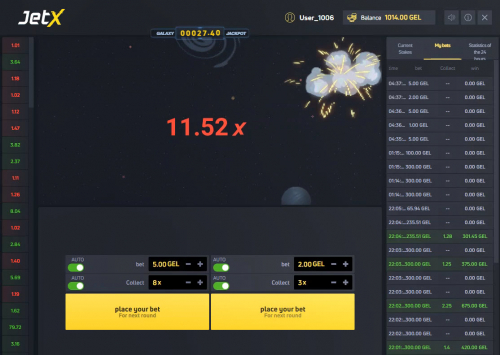 The return of this game is reported to be 97%.

The more advanced readers may be interested to know that the average multiplier the spaceship achieves, assuming it gets off the runway, approaches e =~ 2.718281818x as the time until the explosion approaches the exponential distribution.

Play JetX for fun at the SmartSoft Gaming web site.

When I was testing out this game for this article there was a game where the spaceship reached a multiplier of 12540.26. Check the game history on the left side of the image below.