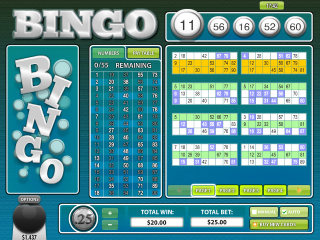 European Bingo is a bingo-based game by Rival, which provides games for Internet casinos. It is played on 3 by 9 bingo cards with five numbers on each of the three rows. The player plays against the game, not other players, and is paid on the highest paying pattern he covers on each card.

The following three tables show the probability and return for all possible events for a 45-, 55-, and a 65-ball draw. Please forgive the only 15 significant digits in the number of combinations. That is the maximum that Excel can handle.

The following table shows the return according to the number of balls in the draw. As you can see, the greatest return is for a 55-ball draw at 96.62%. So, if you must play, choose the 55-ball draw.